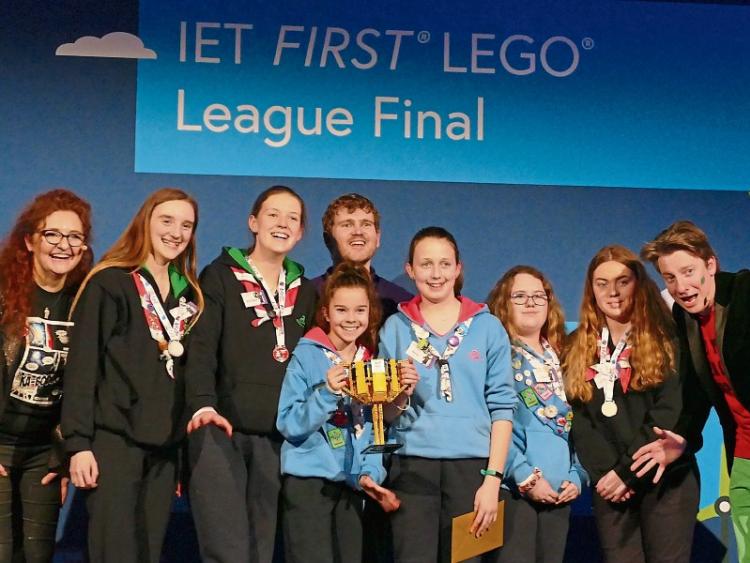 Laura Molloy (13), Lara Timoney-O’Brien (13) and Aoibheann Griffin (14) of St Bridget’s Guides, Clonmel,  were part of the IGG Munster Monsters team that secured a place at the All Ireland Final when they received an award for Best Robot Design at the FIRST LEGO League Regional Finals in Dublin City University on  February 15

The Munster Monsters team, which is made up of IGG members from Clonmel, Cork and Tralee, came first place in the Robot Knockout section of the All Ireland Final.

The team also won a Special Judges Award in recognition of their research, design and programming skills. Their research project saw them come up with a proposal for a hydro electric dam to combat flooding in towns in the South West of Ireland.

FIRST stands for ‘For Inspiration and Recognition of Science and Technology’ and the FIRST LEGO League, which takes place in over 90 countries, encourages children and young people aged 11-16 to think like scientists and engineers, developing practical solutions to real-world issues. The teams operate under a signature core set of values, which include creative thinking, problem- solving, teamwork, communication and the spirit of friendly competition and co-operation.

Laura said: “The FIRST LEGO League final was such a great experience - the atmosphere was great and I met so many different people from across Ireland there. I am so glad that I was given the opportunity to do this by IGG and DCU. I was thrilled when we won the two awards. I really hope to do it next year as well."

Aoibheann said: "Taking part in the final was such an amazing experience! From the start of the day it was go go go! The Robot Wars was so much fun and everyone in our team got a chance to compete in it, which was great. The Knockout Game was so tense but so amazing at the same time. What a thrill it was to win that! Then to also win a second award - the Judges Award - this was a very special award for us  to win and we were so appreciative of this."

Lara said: "Taking part in the final was a wonderful experience - stressful but worth every minute! It was great to see our hard work pay off by taking a Judges Choice Award and the Knockout round trophies. The Guides I’ve had the pleasure to work with from across Munster and from my own unit show just what Girl Guides can do and achieve against all odds. We definitely lived by the Guide Law- a Guide makes good use of her time, talents and materials. I will definitely be entering again next year!"