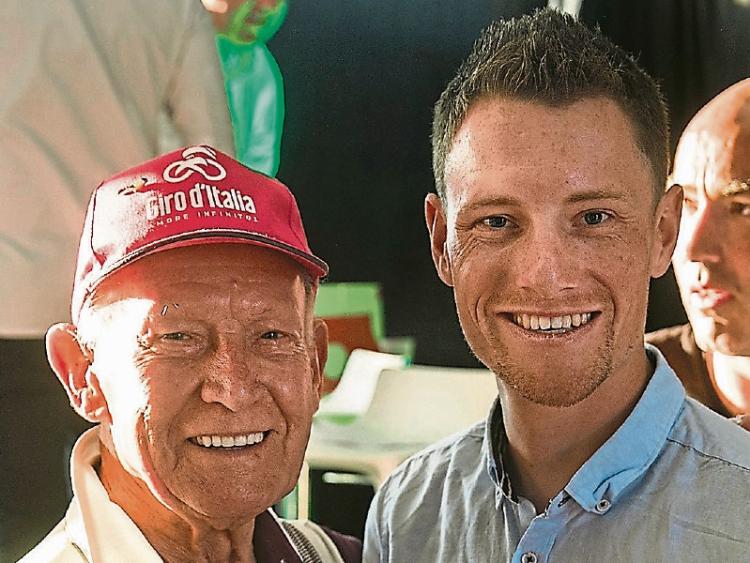 Divine intervention played its part in Sam Bennett’s historic points victory in the Tour de France, according to his proud grandfather.

“On Saturday, the night before the final stage I said the Rosary to keep him out of trouble, and so that he wouldn’t have a crash and come a cropper,” said a delighted Pat Cashin.

“And I promised to say the Rosary again on Sunday night if he won the stage.

“The moral of the story is that faith can move mountains.”

88-year-old Pat, who lives in College Avenue, Clonmel, said he was “thrilled to bits” with his grandson’s success.

“The excitement on Sunday was out of this world”, said Pat, father of Sam’s mother Helen.

“It’s fantastic, little did I realise that he would win the final stage (his second stage win in this year’s Tour). His (Deceuninck–Quick-Step) team lined him up for the final sprint and he got an adrenaline rush to make the final burst.”

Pat and his late wife Alice played their part in Sam’s initial interest in cycling, when they bought the global superstar his first bike.

A freelance photographer who took pictures for The Nationalist for several years, Pat captured an image of Sam as a young child on the telephone asking Santa for that bike for Christmas, after the family had returned to Ireland from Belgium where his father Michael had been a professional soccer player with Eendracht Wervik FC.

And Pat was delighted to make a gift of the photo as part of his wedding present to Sam and his fellow Carrick-on-Suir native Tara Fogarty when they were married in Cork last November.

A keen singer who performs with the male vocal group The Gordonaires in Clonmel, Pat paid a musical tribute to his famous grandson on the Ray D’Arcy show on RTE Radio the day after the Tour de France finale, singing a special version of Danny Boy with the lyrics “Oh Sammy Boy, the Carrick boys are calling....”

Pat said that Sam’s victory was a fabulous reward for all his hard work in the sport, and more than made up for his disappointment in the 2015 Tour de France, when he began the race sick, having been diagnosed with a hernia on his diaphragm. He completed 16 stages of the race before abandoning.

The following year he was involved in a crash that resulted in broken fingers on his right hand but he continued to finish the race last in the general classification – receiving the lanterne rouge – and finished in the top ten on the final stage in Paris.

“It’s great, it has given everyone a lift”, says Pat of his grandson, who has now become the first Irishman since fellow Carrick man Sean Kelly in 1989 to win the points classification of the Tour de France.