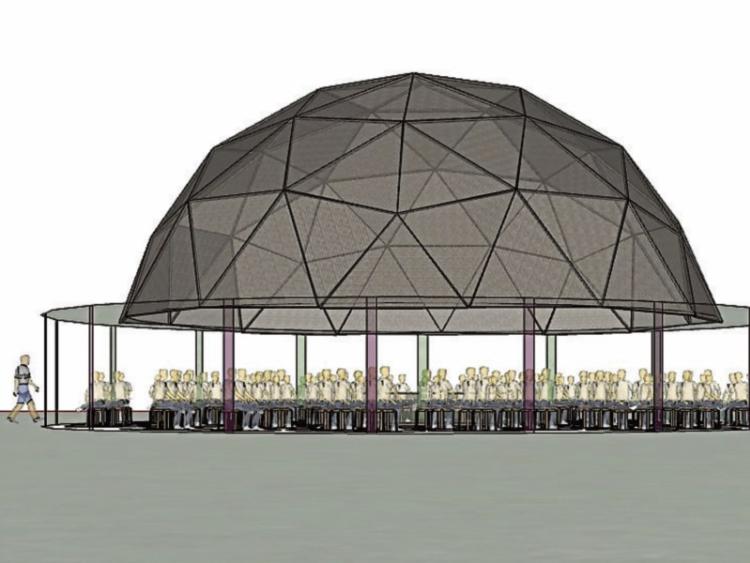 An artist’s impression of the geodome, a pop-up venue that will be located at Mick Delahunty Square at this year’s Junction arts Festival in Clonmel

A new state-of-the-art geodome promises to be “a gamechanger” for the Clonmel Junction Arts Festival, which celebrates its 20th anniversary this year.

The pop-up, portable venue will be located at Mick Delahunty Square for the duration of this year’s festival, which runs from July 3-11.

“It’s a huge opportunity for the festival in terms of giving it a visual identity, and in terms of being able to place it in a number of different places in Clonmel in different festival years,” says Cliona Maher, the festival’s artistic director.

The geodome has the capacity for live streaming, with fixed cameras that won’t interrupt the audience experience.

“One of the difficulties in Clonmel is that we don’t have a modern, fully-equipped professional performing arts space,” says Ms Maher.

“The geodome is innovative, eye catching and sustainable.”

Triangles fit into nodes to create a spherical dome. The parts are lightweight and easy to construct and mount, and the festival’s production manager has adapted the structure with a number of very experienced engineers to create something that is Covid-friendly.

It measures fifteen metres in diameter and is seven metres high. The geodome is an ecological structure and all the lighting will be LED.

“The work that we programme for it can take place during Covid-19 restrictions from Levels 1-5. And it’s not just a venue for Covid times, it’s also a venue for going forward,” says Cliona Maher.

“It just means we can go ahead with planning things very solidly.”

She says that other pop-up elements such as a food area, play area and workshop space can be added in the future.

It will be located this year at Mick Delahunty Square, which is also home to some of the festival’s key partners such as the Tipperary Museum of Hidden History.

The festival will also reach out to Banna Chluain Meala, which is celebrating its 50th anniversary this year.

While the pandemic has created an amount of uncertainty around every facet of life, Cliona Maher says it also offers an opportunity to turn a negative situation into a positive one.

“Even in Level 5 the geodome is a structure where you can create work for digital distribution, so our intention is to programme work that can be watched live or live streamed. As we move down through the levels hopefully we’ll be able to have small audiences.

“Looking at the vaccination plan, it would be foolishly optimistic to think that we would be able to have 100 people in the venue in July.

“But one of the intentions is to give artists a reason to create work and there’s a lot of support, nationally and locally around that.

“What we have shown last year is that we can produce work in any set of circumstances.

“We’re very conscious of health and safety and our responsibilities to both the artists and technicians who work with us and the audiences, and what we’re trying to do is learn from the experiences of last year, plan for a worst case scenario and plan for something that can expand into a best case scenario.”

The theme for the 2021 Junction is Identity, What’s In a Name.

“It’s looking at Clonmel’s history as a melting pot, due to trade, the Kickham Army Barracks, being a centre of industry and it’s looking at the past, present and future identity of Clonmel,” says Ms Maher.

“We’re working in partnership with a number of different organisations, including the South Tipperary Arts Centre, and are working on an open call for visual artists, where we have interior and exterior installations on the theme of looking at the identity of Clonmel, past, present and future.

“With the Tipperary Museum of Hidden History we’re working on cabinets of curiosity, where we invite well-known Clonmel personalities to put together their image of Clonmel.

“We’ll also work with TY students to counter point that with their idea of what Clonmel is nowadays.

“We have a Collins Hall project (relating to the legendary Market Street dancehall of yesteryear), which was to be a big production but that is not going to happen. 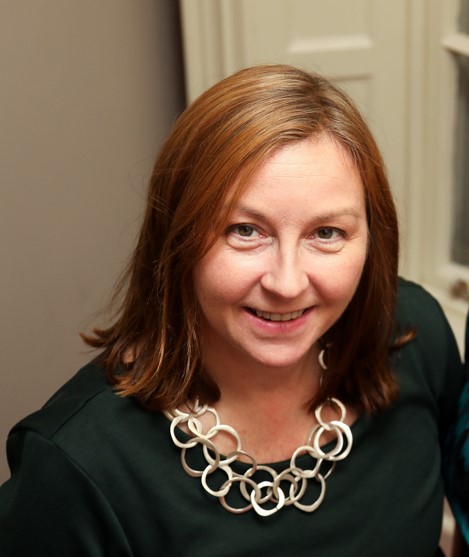 “It ties in very nicely with and echoes the museum’s wonderful Mick Delahunty CD project, and also the identity theme. It also resonates very well with the forthcoming War of Independence project at the museum.”

Ms Maher says the festival team are also working with the OPW for a concert series called Rare Clonmel at the Main Guard, which hopefully will take place.

“This will look at historical music that has a connection with the Main Guard, such as the music that would have been played around the time of Cromwell’s Siege of Clonmel and the music of the Butlers of Ormonde.

“We could also make a connection with Tipperary Tourism and the Butler trail in that, and will also include 19th-20th century music, featuring John Field, Mícheál O’Súilleabháin and Frank Patterson.

“The festival will also revisit the We Can Be Heroes concert of some years ago, a project where young musicians had the opportunity to work with experienced names such as Jerry Fish and Gavin Glass.

“And plays by local performers, such as the presentation of The Cute Hoor by Eve O’Mahoney, will showcase their work.

“With LIT, who are close partners, six animated films are being created by students for the festival, all around the theme of identity.

“It’s about positioning Clonmel as a cultural and creative town from historical times through the future.”

Cliona says a number of events will look back at the history of the festival.

The My Clonmel Junction Scrapbook project will have workshops with former volunteers, artists and audience members, “all the huge community of people who work together to make a festival, and honour and celebrate that history”.

“We want to archive the festival to the UCD festivals archive, which will hopefully generate some great PR for the festival.

“We’re producing a short book with memories and photos and this project feeds into the audience development plan, because it’s a way of seeing people’s awareness of the festival, and we’re also going to use it as a springboard to look at where we go in the next 20 years.”

The artistic director says some Town Hall events with stakeholders, and with audiences and artists are also in the pipeline.

“We want to build our strategic policy for the next 20 years with all the previous and current stakeholders.”

She says the overall objective is that Clonmel Junction Arts Festival has been for a number of years the biggest arts organisation in county Tipperary, in terms of central Arts Council funding, and she describes that as “a huge responsibility”.

“I think it means we have a duty to the local creative community to work with them to develop a cultural community that can really excel at a national level.

“We have the people here who can do that, part of our development policy and part of our objectives is to help develop the infrastructure.”

The festival’s core funding of €101,000 is provided by the Arts Council.

Additional funding of €20,000 has been made available by the Arts Council for the geodome, and another €20,000 for a joint project between the arts centre and the Finding A Voice concert series to develop all of its websites and its digital marketing plans, “so it helps us to up our game in those areas”.

This will involve Junction working with Sandra Hennessy in Be Dynamic digital marketing in Cashel, and web designer Sarah Loh in Clonmel.

The extra funding will also enable the festival to work with LIT Clonmel’s digital campus and the filmmaker, Aosdána member, Trish McAdam, in creating a full film.

Cliona Maher says that as well as developing platforms for local artists, one of Junction’s policies in recent years has been to make sure that national money is spent in Tipperary on local suppliers, producers, artists and crew.

For more news read Vote for your favourite building in Tipperary