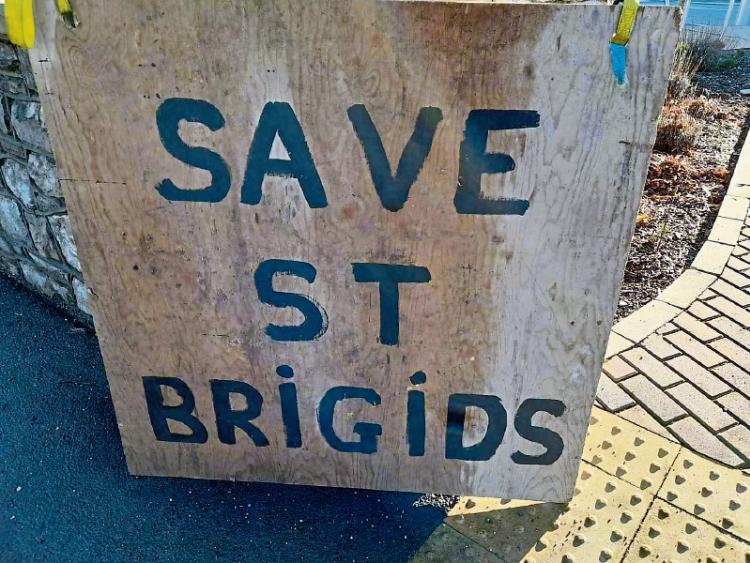 A Save St Brigid's Hospital placard

Save St Brigid’s Hospital campaigners and local councillors have condemned and disputed Minister of State Mary Butler’s statement that the Carrick-on-Suir hospital would need to be demolished and rebuilt in order to reopen – an option the HSE considers “unviable”.

There has been an angry backlash in Carrick-on-Suir  to the Minister for Mental Health & Older Persons statement last week which outlined that if the hospital was permitted to continue “patient safety would be jeopardised  and a degree of risk to human life would be posed”.

In the statement, the Minister of State said substantial refurbishment and extension was required to resume short stay services at St Brigid’s Hospital in line with safer, better healthcare and infection, prevention and control standards introduced to deal with Covid-19.  She said the current premises was not conducive to support the level of refurbishment and adaptations required to resume short stay inpatient services.

“This would in effect require the demolition of the existing premises and a complete new build on a very tight site, with a need to raise floor levels by approximately one metre.

“HSE Estates/Technical services have indicated this is not a viable option,” she added.

Leaders of the Save St Brigid’s community campaign group in the town have rejected the HSE’s contention that the current hospital building needs to be demolished  and rebuilt and  vehemently disagree that reopening the hospital would put patient and staff safety at risk.

Carrick-on-Suir Cllr Kieran Bourke, who like Minister Butler is a member of Fianna Fáil, has also strongly disputed her statement. Both the action group and Cllr Bourke disagree with  the HSE’s view that the floor level of the hospital would have to be raised one metre. They said the hospital has never been flooded or threatened with flooding.

“To say the hospital needs to be raised is laughable to every person in out town,”  said the Save St Brigid’s Action group leaders Cllr David Dunne (SF), Eddie Reade, Elaine Wall and Margo Kavanagh in a joint statement.

Cllr Bourke  contends the HSE is basing its concern about a flood risk to the site on old out of date maps for the town.

Cllr Bourke estimates an investment of less than €1m would bring St Brigid’s Hospital’s current building up to the standards required for it to reopen as a district hospital.

And the building of a new hospital or substantial extension would cost just €5m to €6m. There was sufficient land beside the hospital to do that. He pointed out that the 2018 HIQA report on St Brigid’s acknowledged the fantastic service the hospital was providing for the Carrick-on-Suir area and recommended in the long term that a new hospital building be developed on a green field site at a cost of around €5m.  He noted the HIQA report didn’t raise any concerns about a   flood risk or narrow corridors in the existing hospital.

The Save St Brigid’s action group statement also argues that St Brigid’s  was “deemed more than adequate for purpose” in the 2018 HIQA report. “Not once was the structure of the building called into question, not just the last report but in any report ever recorded,” the group said.

Turning to the HSE’s comment about the hospital being on a “tight site”, the campaigners argued  this was because of the new Primary Care Centre built beside it, which they described as a “big white elephant” with less than 50% of its space currently  used.

They   disagreed that reopening St Brigid’s would pose a safety risk to patients.  They claimed any one with a passing knowledge of the hospital knew  a bed was removed from each of its big wards upstairs to address the   inadequate space issue.

They said the statements of Minister Butler and Barbara Murphy, the Head of Services for Older People in the HSE’s South East Community Healthcare,   had only   strengthened the resolve of the community.

“We have been ignored by the minister; we have been belittled by her continued refusal to meet with the community action group members but we are not defeated no matter how disheartened we feel.