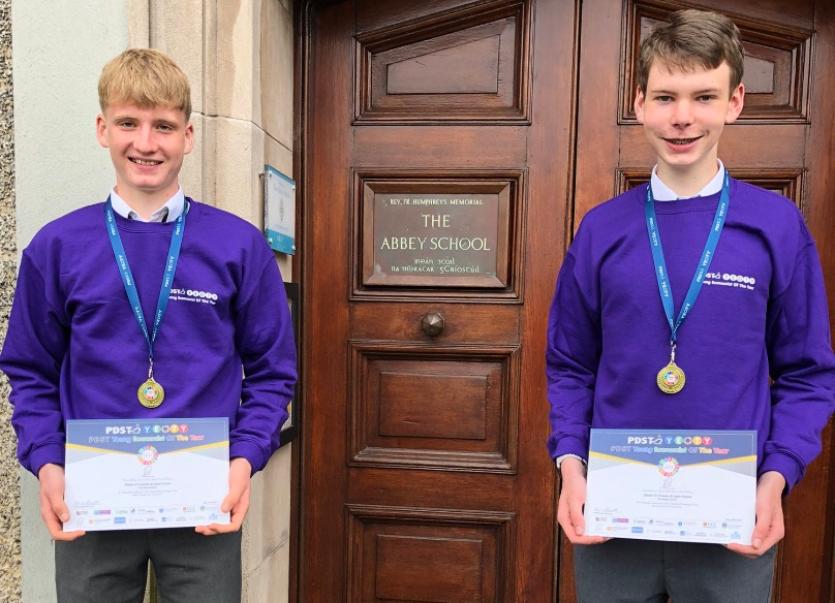 Abbey TY students Liam Carew and Shane O’Connor recently won a Gold Award for their project entered for Young Economist of The Year which is anchored by the Professional Development Service for Teachers.
They received a gold medal and a certificate of participation last month.
In addition, their project which focused on, “The Changing Landscape of Irish Retail Banking and its Impact on Consumers” was shortlisted for eligibility for further placings in special interest awards which took place recently in an online awards ceremony. The boys had further success at this awards ceremony, winning the national silver award with second place in the TY Category. The final aspect of their success is an invitation to sit an exam to determine eligibility for the Irish International Economic Olympiad Team.
This is another outstanding achievement for both Liam and Shane. Thanks to Conor Hayes, teacher at the school, for facilitating the research project with the students.
PRESTIGIOUS ACCOLADE
Their findings were also informed by a number of experienced personnel in the field of Economics, Dr Fergal O’Brien (Kemmy Business School, UL), Oliver Brown, UCC, Prof Davide Romelli TCD and Dr Conor O’Toole, ESRI.
This is a prestigious accolade for both the students and the school. The trophy cabinet is building up quickly for these two students who have had a phenomenal year at every project and competition they have participated with. The future is bright and the Abbey CBS wish them both the very best.