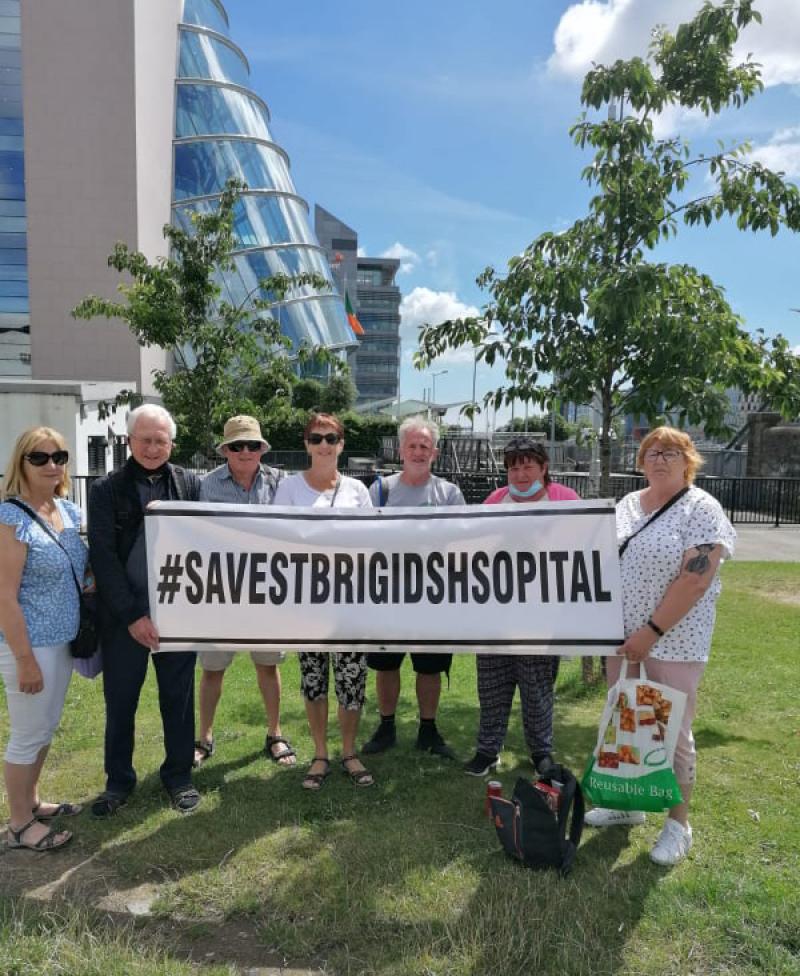 Save St Brigid’s Hospital campaigners have so far collected 3,000 names for a petition calling for the reopening of the Carrick-on-Suir District Hospital and they plan to present it to the Joint Oireachtas Committee on Public Petitions in September.
The petition was launched last month after Minister of State for Mental Health & Older People, Mary Butler, met Carrick-on-Suir Municipal District councillors seeking answers about the shock decision to close St Brigid’s Hospital last year over concerns the building didn’t meet Covid-19 prevention standards.
Carrick-on-Suir Fianna Fáil Cllr Kieran Bourke, who came up with the idea for the petition in the wake of that meeting, has set a target of collecting 10,000 names over the summer months.
He believes such a large petition will oblige the Government to stand up and take notice of the campaign in Carrick-on-Suir to reopen St Brigid’s, which provided convalescence, respite and palliative care to people in Carrick-on-Suir and its hinterland.
His petition proposal has been taken up by the Save St Brigid’s Hospital Action Group and volunteers have been busy collecting names in residential areas, work places, shops and at a Saturday stand on Main Street in Carrick-on-Suir over the past month.
Cllr Bourke said the petition’s wording is based on a challenge Minister Butler put to the District’s councillors during their meeting with her when she asked did they think it was safe to send a loved one to St Brigid’s Hospital?
At Carrick-on-Suir Municipal District’s monthly meeting last week, he encouraged anyone who wishes to sign the petition or pick up a petition sheet to drop into his constituency office at Main Street, Carrick-on-Suir, which is open on weekdays.
He told The Nationalist the public response to the petition has been fantastic and great credit is due to all the individuals who have gone out and canvassed for names,” he declared.
Fellow Carrick-on-Suir Cllr David Dunne of Sinn Féin, a founding member of the action group agrees, though he believes the final number of petition names collected will be closer to 5,000.
“The reaction we are getting is very, very strong. People coming up to sign the petition tell us stories about how their loved ones were cared for at St Brigid’s.”
The plan over the coming weeks is to collect names for the petition in Carrick-on-Suir’s large hinterland of communities in counties Tipperary, Kilkenny and Waterford as St Brigid’s Hospital cared for patients living in all these areas.
Cllr Dunne said the action group plans to present the completed petition to the Committee on Public Petitions when the Dáil resumes after the summer break in mid-September.
The action group is planning to stage a protest at the Dáil to coincide with the handing over of the petition.
Cllr Dunne said they are hoping two bus loads of protesters will travel to Dublin for the Dáil protest provisionally scheduled for September 19.
When the Committee on Public Petitions, which is currently chaired by Tipperary Sinn Féin TD Martin Browne, receives the petition, it will have the power to seek oral or written evidence from relevant Government departments, other bodies and agencies.
It also has the power to invite ministers to attend one of its meetings and answer questions and may invite the petitioner to speak on the issue. Meanwhile, Cllr Dunne said a delegation from the Save St Brigid’s Action Group protested at the Dáil currently sitting at the National Convention Centre before its summer recess and lobbied a number of TDs about the need to reopen the District Hospital.