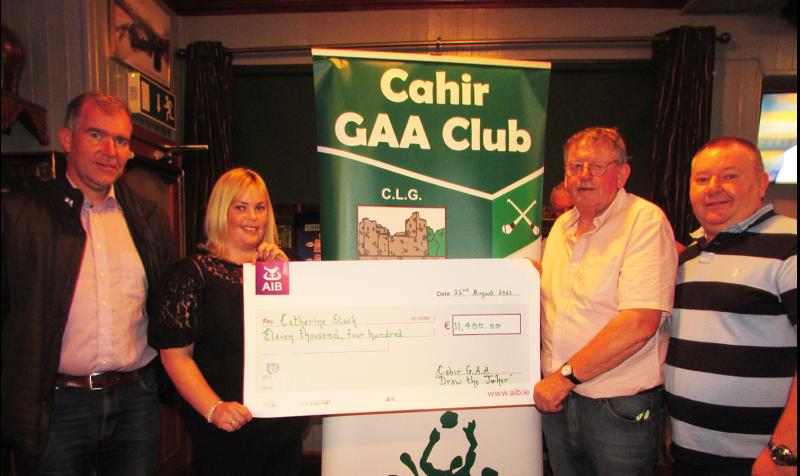 At the presentation of the winning Draw the Jackpot cheque to the winner last Sunday night were from left to right: Michael Fahy, Cahir GAA, Jackpot winner Catherine Stack, Gerry O’Donnell Cahir GAA a

At the presentation of the winning Draw the Jackpot cheque to the winner last Sunday night were from left to right: Michael Fahy, Cahir GAA, Jackpot winner Catherine Stack, Gerry O’Donnell Cahir GAA and William Stack.

Hurling - Our Junior “B” Hurlers gave a good account of themselves when they played Moyle Rovers in Ardfinnan on last Wednesday night. Cahir started really well and led 10 points to 3 in the middle of the first half. However, Moyle Rovers improved as the game progressed and scored vital goals to reduce the deficit. The standard of play was very good with a total of seven goals scored. Everybody thought Cahir had won by a point but the referee scored it a draw with Cahir 3-17 to Moyle Rovers 4-14. The team and scorers were as follows: Thomas Molan, Keelan Looby, James Walsh, Liam Hickey, Mark Casey, Liam Meehan, Dara Heffernan, Daniel Moloney (0-1), Ger Quinn, Conor O’Brien (0-2), Johnny B. O’Brien (1-0), Eoin O’Neill, Jack Buckley (0-12), Eoghan Kelly (2-1), Daragh Howard (0-2). Subs Used: Callum McGrath, Killian Halpin, Ciaran O’Donnell and Liam O’Neill.

Our Under 19 Hurlers play St. Marys this Wednesday night(tonight) in Goatenbridge at 7:00 pm.

Congratulations - to Roisin Howard who starred for Tipperary in the All-Ireland Quarter Final victory over Waterford. She was chosen as the player of the match. We wish a speedy recovery to Aisling Moloney who is recovering after her cruciate ligament operation.

Draw the Joker - Our Joker draw was held in Morrissey’s on Sunday night and the Jackpot was not won. Rose Mary Daly won €100, Pat Burke & Cahir Steel won €50 each, John Quirke €30 and Meadhbh won €20. Tickets can be purchased from the usual outlets and on-line by downloading the Clubforce App. Also on Sunday night our Jackpot winner, Catherine Stack received her prize.

Juvenile News - It was a mixed bag of results this week for the Juveniles. The U13s played in all 3 groups and were unlucky not to win. The U17s recorded two great wins this week, Monday last they played Moyle Rovers and Thursday they played Kilsheelan/Kilcash. They won both games.

John West Feile na nGael - 50 Anniversary of the Competition. Last weekend was Feile weekend in Tipperary. Cahir were grouped in Division 5 with Clonmel Og and Lattin/Aherlow. Our first two games were in Ned Hall Park. Cahir led from the start in both games, they played hard and won both games convincingly. Cahir 2.13 - Clonmel Og 0.08, Cahir 5.10 - Lattin/Aherlow 0.02. With two greats wins we topped the Group. It was up to Clonoulty for the Feile Semi Final v Clonoulty/Rossmore.

Once again, Cahir led from the start and secured themselves a place in the final on a scoreline of Cahir 3.12 - Clonoulty/Rossmore 0.07. The Feile weekend did not end there. On Sunday morning all roads led to Dr Morris Park for the County Feile Finals. Cahir were up against our South rivals Killenaule in the Final. Cahir got off to a slow start and were 1-5 / 0-1 down at half time. The second half Cahir showed great heart and scored three unanswered points. Unfortunately it was too late for a comeback. FT Cahir 0-4 / Killenaule 1-6.

Thank you to the U15 Team and Management for a fantastic weekend of Hurling. They did themselves and the Club proud. The future is bright for these young men.

On Saturday August 28: PEIL Weekend in Tipperary the team are in Div 4 G1. They are grouped with Loughmore/Castleiny, Killurane/McDonaghs, and Clonoulty/Rossmore. Best of luck to all involved.

Camogie notes - What a performance from Róisín Howard in Páirc Uí Chaoimh yesterday. The Cahir camogie player donned the number 11 Jersey for her County Senior Team and showed the epitome of skill and work rate to help Tipperary overcome Waterford and reach this year’s All Ireland Semi finals when they take on Galway this Sunday. Roisin proudly received the “Player of the Match” award for her huge input into the game. Well done on your powerful performance. Also to our Club Officer Mary Howard who is a selector on the team. Well done all.

U16s - Congratulations also to our young U16 Girls who have qualified to play the Shield final on Wednesday September 1st when they will play the winners of Toomevara / Drom clash with time and venue yet to be confirmed.

Draw the Joker - Our Joker draw was held in The Hill Bar last Sunday night and the Jackpot was finally won. The lucky winner of €11,400.00 was Catherine Stack. Congratulations Catherine. Kevin Landy and Syzmon Stepien won €50 each, Ger O’Gorman €30 and Marie Murphy €20. Tickets can be purchased from the usual outlets and on-line by downloading the Clubforce App.