From Poulmucka to California, North Dakota and Iowa - Tipperary ploughman tells his story! 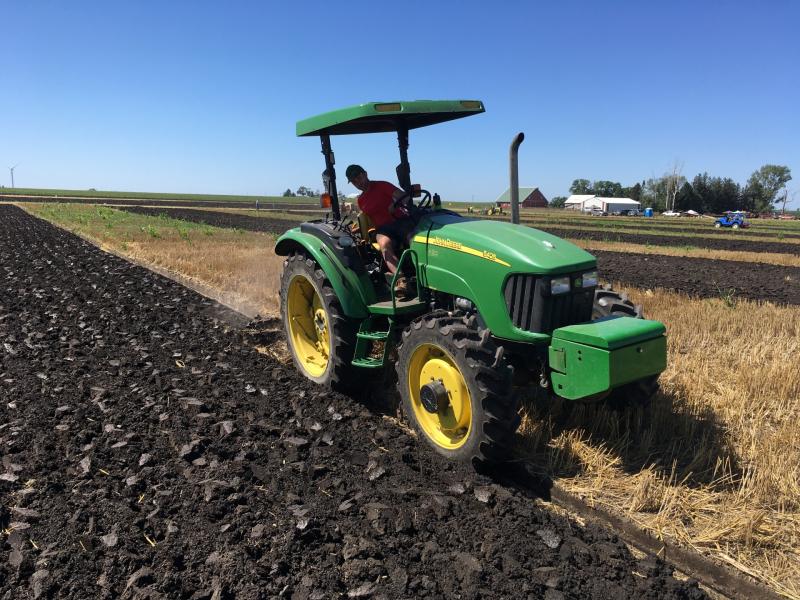 Cahir's John O'Brien competing in the US Ploughing Championships in Iowa earlier this month.

John O’Brien from Poulmucka Ploughing Association moved to California with his employer BioMarin Pharmaceuticals in 2019 and now lives just north of San Francisco, California. Having grown up on a farm near Cahir and ploughed competitively at national level since he was 16, John was interested in getting some ploughing done while in America.
He started by emailing the president of the USA ploughing organisation who responded by telling John that he would be closer to the American Ploughing when I was in Ireland rather than California!!
Nevertheless, John persisted and then contacted Anna Marie McHugh of the Irish National Ploughing Association and swiftly she responded to him with some contacts in US ploughing. 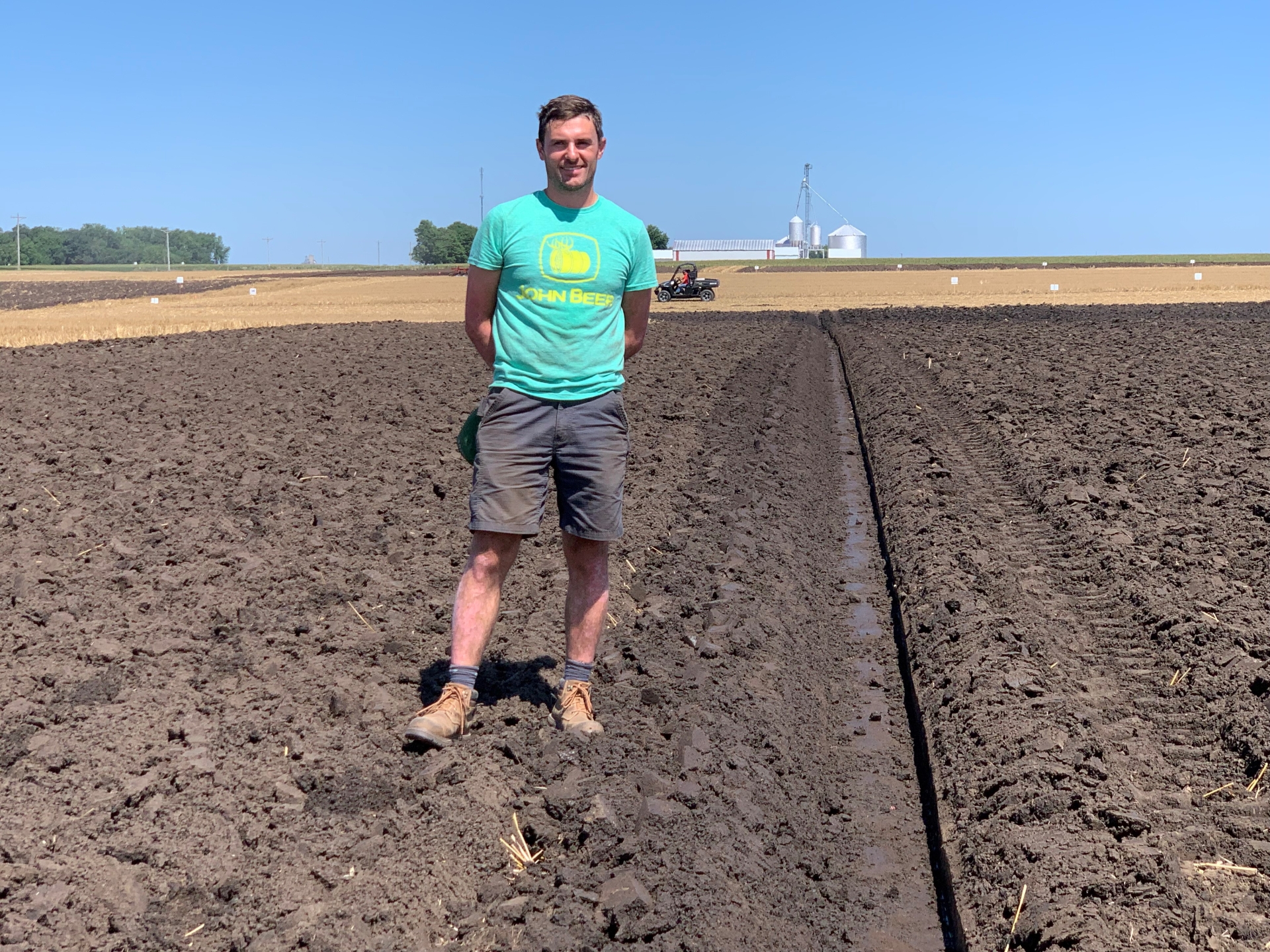 Poulmucka ploughman John O'Brien who recently finished third in the US championships held in Marshalltown, Iowa.

On hearing of John’s application to compete the American competitors were excited by the idea for two reasons: (1) Having an Irish person plough at the contest and (2) having the first-ever Californian entry into the USA ploughing contest!
They organised a tractor and plough, but it was up to John to get them set up for the match. After much planning with a very generous Kevin Albrecht, John made a trip to Kevin’s farm in South Dakota in June. This was very much a working holiday, it required changing wheels on the tractor, fabricating new parts for the plough and a little bit of actual ploughing practice on Kevin’s land.
John retuned to Kevin’s farm in August, to make final preparations, load the tractor and plough onto a trailer and drive the rig to Marshalltown, Iowa for the USA National Ploughing Championship, a journey of 300 miles! He then spent the week in Iowa getting in a couple of days practice and then three days of competitive ploughing.
The national contest was held over two days on Friday and Saturday, August 12 and 13 in which the Poulmucka ploughman finished third overall. 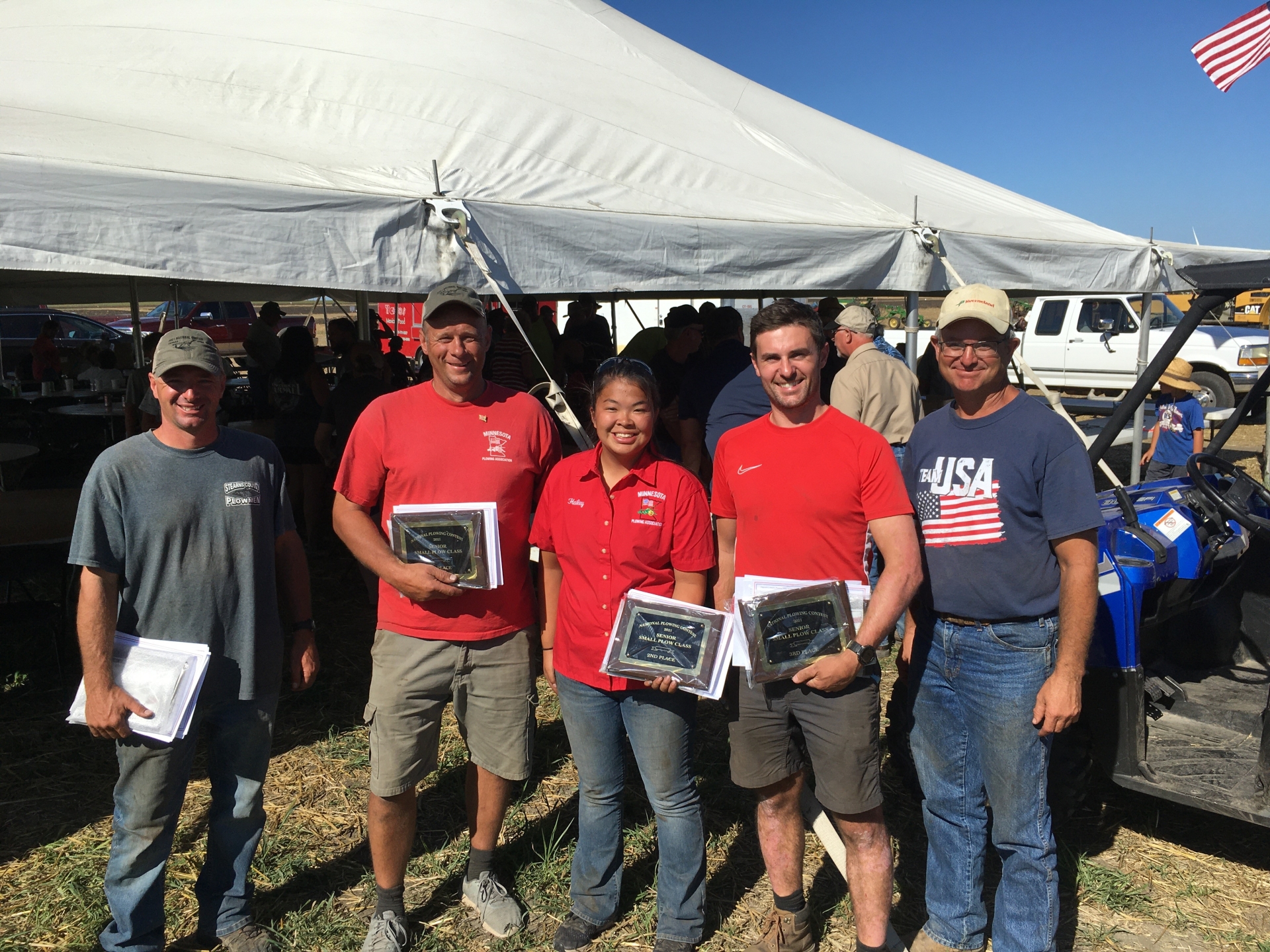 John O’Brien, second from right, at the prizegiving following his third place finish in the US Small ‘Plow’ Class at Iowa.

John left the field Saturday evening, drove back to Kevin’s farm in South Dakota, and then caught a flight back to San Francisco to be at work Monday morning.
John couldn’t say enough about the kindness of Kevin to loan him a tractor and plough and for giving him full access to his farm, workshop and home.
“When I got to the competition in Iowa I was again amazed by the kindness and down to earth attitude of my fellow competitors, organisers and spectators, it was like I had always been there. One thing I learned is that the ploughing community is a global community and all are very decent, likeminded people. I made many friends some of which have already invited me to their farms to experience farming in the United States. If I am still living and working here next year, I will make a return trip to compete in the 2022 contest which is being held in Minnesota,” concluded John.

John is the youngest of John and Peggy O’Brien’s, (Ballylehan, Cahir) five children. The two John’s have represented Poulmucka Ploughing at the National Ploughing championships for many years.
John (Snr) has competed in the 2-furrow vintage mounted class for the best part of 20 years and young John has competed in 15 All Ireland contests in U21, U28 and more recently at Intermediate level, all on the 2-furrow conventional match plough class.
John lives in San Francisco with his wife Claire and they are both working in, engineering, and teaching respectively.
John is a brother of Margaret Burke (a juvenilecoach Rockwell Rovers LGFA and Camogie Club). John’s other siblings are: Paraic, Keylong, Cahir, Mary Hanrahan, Ballyporeen and Ann Walsh, Cork, and while not talented at match ploughing themselves are very much devoted and supporters of ploughing

From California to Iowa - Tipperary man digs deep for success in America!