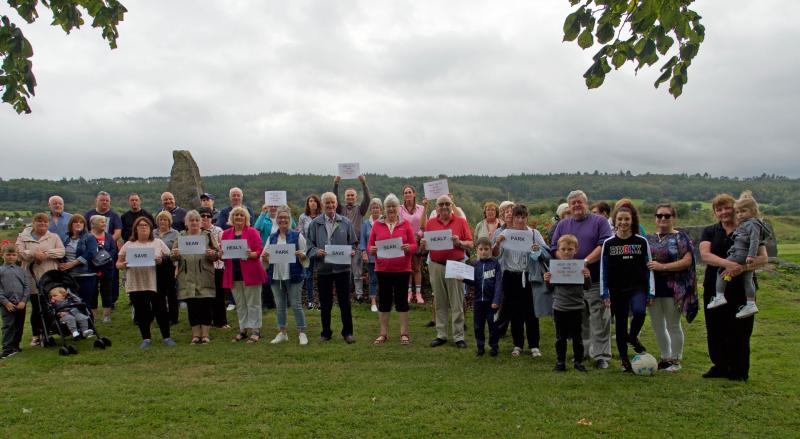 Treacy Park residents pictured at Sean Healy Park in Carrick-on-Suir highlighting their opposition to the development of a car park at the park for Blueway visitors. Picture Anne Marie Magorrian

Tipperary County Council officials say they will meet with residents of a Carrick-on-Suir housing estate to try and address their concerns over plans to develop a car park for Blueway visitors at a riverside park opposite their homes.
The council is seeking the meeting with Sean Treacy Park residents representatives after it received 284 submissions from them and a petition of 540 signatures objecting to the 38-space car park earmarked for a section of Sean Healy Park bordering the N24 road.
Treacy Park residents plan to stage a protest to Carrick-on-Suir Town Hall to reinforce the strength of their opposition. A date has not yet been fixed for the protest.
The car park is one of the developments proposed under the Carrick-on-Suir Regeneration Scheme.
Treacy Park Residents’ Association is calling on the council not to locate it in Sean Healy Park due to the health and safety risk they fear it will pose and because they believe it will detract from the appearance and amenity of the park and attract anti-social behaviour.
The Part 8 planning application for the ambitious Carrick-on-Suir Regeneration Scheme is currently being considered by the council and is due to come before Carrick-on-Suir Municipal District’s next meeting for decision on October 28.
The flood of objections from local residents to the car park were submitted as part of the public consultation process for the planning application,
The council received a total of 380 submissions both positive and negative towards the Regeneration Scheme by the deadline date of September 17.
Mary O’Shea of Treacy Park Residents Association said they hadn’t received any contact from the council about a meeting yet are willing to meet with council officials.
She stressed the residents of her estate are not against the Regeneration Scheme as they know Carrick-on-Suir is an unemployment blackspot and they don’t wish to hinder the Blueway’s progress.
But she said they feel passionately that Sean Healy Park is the wrong place for the car park.
In their submission to the council, the residents association outlined their main concern was the danger the extra volume of traffic going to and from the car park would pose to the estate’s children and elderly residents as they try to cross the already busy N24 to access Sean Healy Park and the river bank to play, swim, cycle, walk with friends and enjoy picnics.
They expressed concern that the proposed exit for the car park was onto the already congested Quay area.
The submission argued the car park will detract from the appearance of Sean Healy Park and will be an “eyesore” that will “totally ruin” the entrance to the town.
The submission also highlighted residents’ fears the car park’s hard surface will negatively impact on Sean Healy Park’s function as a flood plain at times of flooding.
“The residents of Treacy Park cannot already get flood cover on our house insurances and are deemed to be in a red alert/high risk area. Sean Healy Park is all that is stopping the river from flooding our houses at present.”
Alternative locations for the car park are suggested in the submission. Residents proposed the council purchase waste land adjacent to Sean Healy Park or develop a car park at the Castle Field next to Ormond Castle.
Mary also suggested the former service station site next to Suirside Veterinary Clinic as another possibility.
She pointed out that Treacy Park residents are also concerned the car park would attract anti-social behaviour at night such as becoming a congregation point for boy racers.
“I fear if that car park goes ahead, you will have all sorts going in there who will be up to no good.”
Mary, whose home faces Sean Healy Park, said Treacy Park's residents feel so strongly about the plans for the car park because they worked so hard to help turn it from waste land into the beautiful amenity it is today.

The submissions Tipperary County Council has received in relation to the car park proposed for Sean Healy Park have been sent to the Carrick-on-Suir Regeneration Scheme design consultants, who have been instructed to address the concerns raised by residents.
Carrick-on-Suir Municipal District’s Director of Services Brian Beck said the council hopes to meet with representatives of Treacy Park Residents’ Association either this week or early next week to discuss their objections to the car park.
He hopes to present to them a “montage” of proposed changes to address the difficulties they have with the car park proposal.
Mr Beck stressed the council was anxious to listen to residents’ concerns and get their support for the plans. The local authority didn’t want to impose a development on them, he added.
“We will work with the residents to see what we can do to address their concerns.
“Equally I have had a lot of contacts from people asking us to improve this location as a take-off point for the Blueway.”
Mr Beck said the car park was needed to stop Blueway visitors parking haphazardly along the N24 around Sean Healy Park and the Treacy Park estate.
He pointed out the consultants looked at a few options when deciding where to locate a car park for Blueway visitors.
“We were very conscious of having a space people would use. People won’t park a distance away from the Blueway.
“They want to be parked next to it,” he argued.
He pointed out the idea behind the car park was to increase the number of visitors to the Blueway in Carrick-on-Suir including the number of people using the river for kayaking.
This was why provision was being made in the car park plan for vehicles with boat trailers.
The council wanted Carrick-on-Suir to be the “launch point” rather than just a stop for Blueway.
If this could be achieved, then it was more likely for visitors to stay and spend money in Carrick-on-Suir.
In relation to alternative sites proposed by residents, he said some of these are privately owned and may not be available or available at a price the council can’t pay.
He noted the landowners may also have their own ideas on what should be developed on the sites.
He also said the council hadn’t time on its side to purchase land for a car park, which take a year to negotiate and finalise.
It had a deadline of the end of this year to apply for Rural Regeneration Development scheme funding to implement the Carrick Regeneration Scheme.
Mr Beck explained the council chose the area of Sean Healy Park between the monuments and N24 for the car park as it believed it would have the minimum impact on the park’s amenities.
He stressed the creation of the car park won’t require the stone monuments to be moved.
Two trees in that area of the park will be removed but the rest will remain.
Mr Beck said the car park surface won’t be a conventional grey tarmac.
It will be made from Grasscrete, a type of solid surface that allows grass to grow through it.
“It’s solid enough to take cars but it maintains the amenity view.”
Health & Safety
Mr Beck said the council engaged with Transport Infrastructure Ireland in relation to health and safety and the car park design proposed in the Regeneration Plan was the safest design in the TII’s view.
He pointed out the installation of pedestrian crossing points in the area around Sean Healy Park were part of the plans to upgrade the N24, which have been approved.
Mr Beck said the council took into account the fact Sean Healy Park was on a flood plain when choosing the car park site.
In relation to anti-social behaviour, he said the council took this issue very seriously.
He has asked the design consultants to review the car park plan to see what measures could be put in place to prevent the site attracting this problem.
The erection of a barrier at the car park to prevent people accessing it at night is one measure being considered.
Mr Beck said he has also asked the consultants to come up with design features to alleviate the car park’s visual impact on residents.
One proposal is to plant hedging to block the appearance of the car park to Treacy Park residents but allow them still to enjoy the park’s amenities such as the trees and river bank.