Gold medal Kilsheelan is back on top in Tipperary Tidy Towns 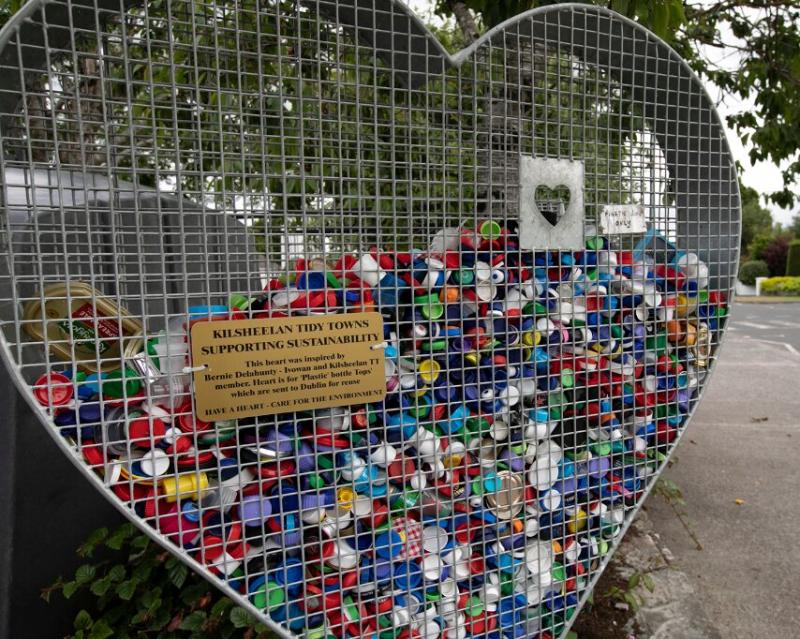 South East Regional Award winners in this year's Tidy Towns, Kilsheelan, is proudly back on top for the whole of County Tipperary once again. Pic: John D. Kelly.

The Super Valu National Tidy Towns winners were announced at the annual awards ceremony at the RDS in Dublin on Friday morning last and pride of place for county Tipperary, following the revelation of the results, is Kilsheelan who came within two marks of overall winners, Ennis, county Clare. They also finished runners-up in their category, Ireland’s Tidiest Small Town, losing out to Abbeyleix, county Laois, by just a single mark.
The Suirside village improved their score by a whopping 11 marks from two years ago when the competition was last held, and are now ranked joint third nationally with four others out of a huge entry of 847 towns and villages up and down the country.
This year the picturesque south Tipperary village picked up its fourth gold medal since 2017 but the icing on the cake last week was the winning of the regional award for the South East of Ireland, the other three regional winners being Abbeyleix Glaslough (county Monaghan) and Ennis.
Kilsheelan also won the County Award for South Tipperary.
And of course Kilsheelan also surpassed Terryglass in north Tipperary (350 marks) to sit proudly atop the whole of the Premier County this year. When you also consider that Birdhill were overall national winners just four years ago in 2017, Kilsheelan, who themselves have history in this competition, winning in both 1975 and 1979, are now proudly back near the very top once again.
In the process, Kilsheelan overturned a two points deficit on Terryglass in 2019 to a three points credit this time around. The result now firmly puts Kilsheelan odds-on to be next National Tidy Towns winner from Tipperary and hopefully the first in the county to win the national award a third time, Terryglass have also won nationally on two occasions.
According to Tom Callery, treasurer of Kilsheelan Tidy Towns, “this result was absolutely huge for us. Only two years ago we were 10th with seven other centres, now we are joint third with just four others, that’s real progress for us”, enthused a delighted Tom.
“We have been making huge strides over the last decade - we were down to 70th position in 2010 - but we’ve put in a tremendous effort and gained significantly in the bio-diversity and sustainability categories, where we picked up an extra five marks this year. In total we picked up 11 marks this time around and that is real progress, no doubt,” he added.
Besides Tom, Isobel Killoran, who is one of the hardest workers in the group, was the only other person who could travel to the awards ceremony this year due to Covid - remember there was no competition at all last year.
But in talking to Tom you quickly get the feeling that Kilsheelan won’t be resting on their laurels even with these good results, they have bigger fish to fry now.
“Sure, we are delighted but we must stay motivated and we want to go on and win this national competition. The improvements are a result of two years of effort by many. We will work at our weaknesses now and develop our strengths further. We would really love to win the Tidy Towns again soon,” added Tom.
“Like everywhere else it takes a lot of effort and we get that in Kilsheelan. It’s volunteers but it is also a lot of people who just go out and do their own thing too, like the Railway Cottage group, they’re a great association who do a huge amount. We would be talking about 60 people all told involved in some way every year, a lot of people looking after their own little patch and collectively that’s the spirit of it,” added Tom.
There were other good performances from around south Tipp with Clonmel in particular doing well.
Clonmel on 344 picked up a Gold Medal in the Large Urban Centres category (15,001- 25,000) . The county’s capital also figured in winning a special award in the All-Ireland Pollinator Plan, capturing the South East Award in that category.
Emly, one of only four locations in Tipperary to win the Tidy Towns overall award back in 2009, also picked up a gold medal in Category B, in the Tidiest Small Towns category (201-1,000 population). There were Bronze Medals also for Cashel (339) and Cahir (338) in Category D, Best Small Towns with populations of 2,501 to 5,000 people, bragging rights by a single point to the City of the Kings.
Ballingarry also featured winning the Endeavour Award for South Tipperary with 296 marks, an improvement of 6.47% on 2019 for the Slieveardagh village.

Tidy Towns results for South Tipperary - who did well and who didn't?