Jacqueline Gartlan will feature on Portrait Artist of the Year 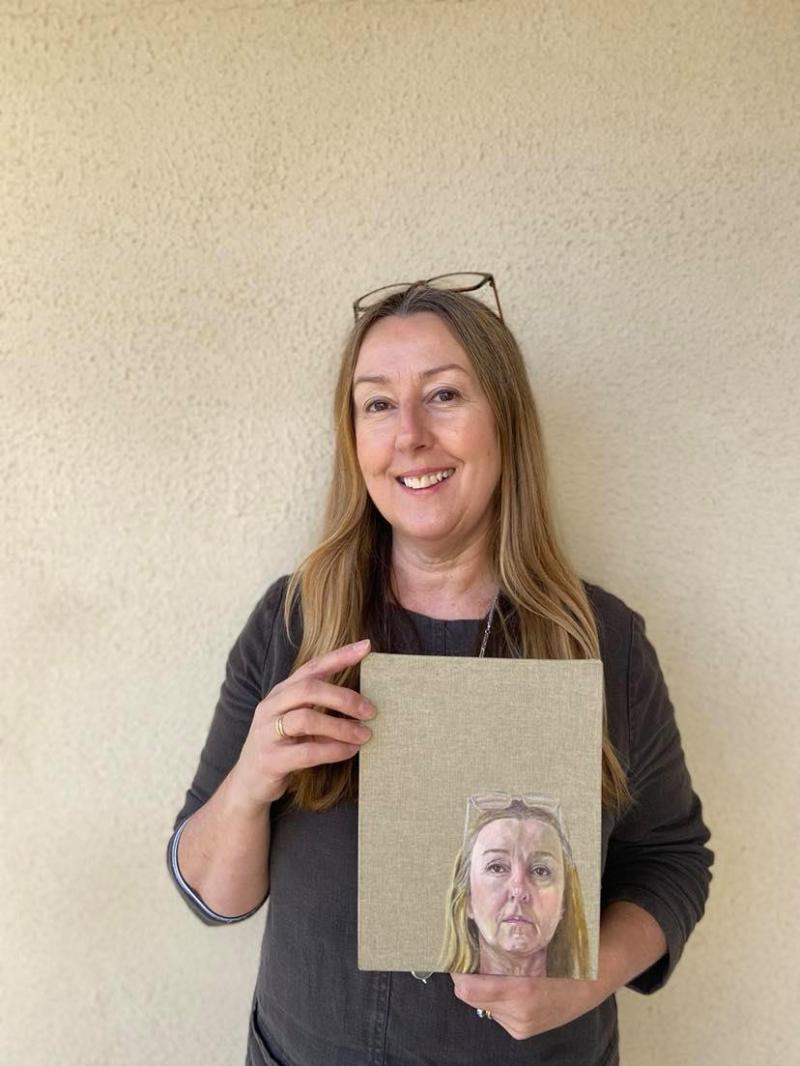 Jacqueline Gartlan will appear on the Portrait Artist of the Year programme on Sky Arts next Wednesday night, November 24

A Clonmel woman who was inspired by the memory of her late sister will be featured on the Portrait Artist of the Year programme on the Sky Arts television channel at 8pm next Wednesday, November 24.
Self-taught artist Jacqueline Gartlan says she was “shocked” to be chosen for the popular programme, which each year aims to find the best portrait/landscape painter.
“When I found out it was like a real pinch-me moment, as in what in God’s name is going on here?”
The self-portrait that earned her a place on the show (see the photo of her holding the portrait, above) depicted Jacqueline “looking very sad” because she was still grieving over the loss of her sister, Breda Breen from Highfield Grove in Clonmel, who died in April 2020.
“I wanted to paint something that would express loss,” she says.
“It was almost because of Breda that I got through, she was with me in a way. She was always very supportive and would have gotten such a kick out of this.
“It’s poignant, it’s because of Breda and me depicting my grief about her death that I got through.”

In next week’s episode, Jacqueline and the other participants are challenged to produce a portrait of English choreographer, theatre director and former Strictly Come Dancing judge Arlene Phillips.
The judges then select the painter who qualifies for the semi-final.
Jacqueline is part of a portrait-painting group of ten artists on Facebook, who for the last two years have entered self-portraits for the programme which, along with Landscape Artist of the Year on Sky Arts, is her favourite television show.
Her work was submitted last January and she received the good news about its acceptance by the programme-makers the following month.

Jacqueline travelled to London last April for the Sky Arts recording, staying with her sister Anne Kilcullen.
“It was a full-on day of filming from 7am to 7pm at the Battersea Arts Centre.
“The day is set up between filming and interviews and I had four hours to paint Arlene Phillips while being constantly interrupted.
“It was an honour to be there and to have my painting picked out of the 2,500 entries,” says Jacqueline.
She was five when her family, the Bates’, moved back to Ireland from Middlesex and settled in Ard Gaoithe, Clonmel.
Jacqueline now lives in Marlfield with her husband Andrew and sons Thomas, David and Joseph.
She says she loved painting as a child and in the last three to four years has started painting with others and has taken part in exhibitions.
She has been doing commissions since a friend asked her to paint a portrait from a photograph a few years ago.
Jacqueline gave up work as a training specialist with Intel shortly after the birth of her first child.
She now has a career as an artist, is a member of the South Tipperary Art Group (STAG) and has recently started morning art classes at Hillview Sports Club.
Her website is www.jacquelinegartlan.com.