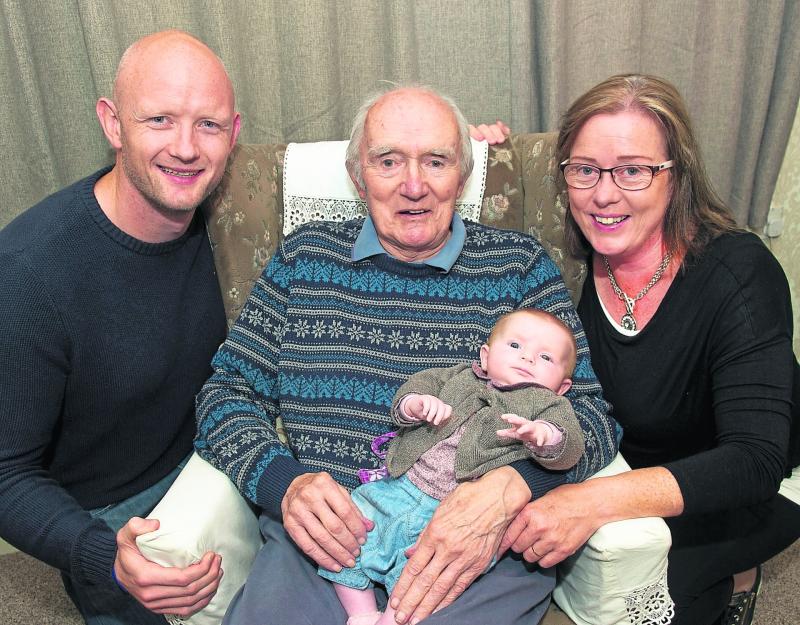 The late Tony Newport spent all his life in his home town of Fethard where he was hugely respected as a family man, newsagent, community activist, historian and outstanding football star in his younger days.

He had an encyclopaedic knowledge of all things Fethard and was regarded far and wide as a man with wonderful recall of times and events past.

In a town where history is so important and where people have such pride in the Friary Town’s legacy, Tony Newport, with his wonderful memory and intellect, was the go-to person for anyone wishing to delve into the past.

In his later years, when many of his contemporaries had passed on, Tony quipped that when he was asked to recall events and people of the past, there was no one left to contradict him.

Tony had a long and proud association with this newspaper as its correspondent for many years.

He not only sold The Nationalist in his well-known Main Street newsagents but also reported for the paper, in his always meticulous and well researched manner, on the town’s comings and goings, births, deaths and marriages and sporting success and failures.

As a keen historian as well, he could also be relied on to colour his contributions with stories and reminiscences from yesteryear.

As a GAA historian, he was without equal and on one occasion reunited a family with a 1909 medal won by a Kilkenny hurler.

The Leinster senior hurling medal was won by Tullaroan player Dan Kennedy and ended up in the Newport home in Fethard for over fifty years.

Kennedy was an outstanding player of the time with three Leinster medals and six All Ireland medals.

Tony’s aunt, Monica Kenrick Sharp, had the medal and gave it to Tony in 1960.

Realising the importance of it to any of Kennedy’s surviving family, he began inquiries and tracked down his last surviving descendant in Derry, Fidelma Boyle.

“She was delighted to get it and was very emotional”, Tony recalled later.

It was across the counter that she first met her husband, Englishman Aubrey ‘Bert’ Newport, and following their wedding in 1928, Bert took over the running of the shop until his retirement in the early 1970s.

It was then that Tony and his wife Mary took charge, Tony moving up the street from his sister Goldie’s grocery shop.

Tony was the fourth generation of the family to run a business in the shop since it first opened in 1920. The premises had been in operation as a tailors and outfitters for at least another eighty years before that.

Tony Newport was a talented sportsman across many disciplines but his great love was Gaelic Football.

In a tribute following his death, Tipperary GAA Board described him as an outstanding goalkeeper for club, county and province who manned the goal for his beloved Blues from the early 1950s to the middle 60s.

He retired from intercounty football in 1961 after giving the best part of a decade as the county netminder. He played in goal for Munster in the Railway Cup semi-final in 1955 when they lost to Connacht by a late point.

He was on the Tipperary team in the Munster Junior Football Final in 1954. He had first come to the notice of the county senior selectors when playing on the county minor team in 1949.

But his greatest contribution was to his club, making his senior debut in 1952 and his roll of honour included three South titles in 1954, ’55 and ’57; two county titles in 1954 and ’57, as captain on the second occasion, while he also played with Killusty Junior Footballers, winning a South and County title in 1956.

He was honoured with the second-ever Cidona Award for Gaelic Football in 1960 and following his playing days, he was inducted into The Nationalist South Tipperary GAA Football Hall of Fame in 2001 and was honoured with a Sean Ghael award from the County Board in 2009.

A modest and unassuming man throughout his life, he was never one for self praise. Reflecting on his intercounty career, he once said it was harder to get off the county team than to get on it. And asked how he rated his own abilities, he replied – “Not much good as a player but always turned up”.

A huge honour for Tony was when he was asked to unveil a Bloody Sunday commemorative plaque outside the GAA pitch on Saturday, August 22, 2020.

Three Fethard players, Ned O’Shea (Captain), Frank ‘Scout’ Butler and Gus McCarthy were part of the Tipperary team on that fateful day and Tony was so proud to be part of the local commemoration in their honour.

Other sporting loves included tennis and badminton, playing tennis at a high level on a successful Fethard team in the 1950s and 60s with friends Jimmy (Slicks) McCarthy and Cly Mullins. Moving indoors in the winter, he also enjoyed great success on the badminton courts with a very strong mixed team including Jimmy McCarthy, Cly Mullins, Anne Connolly, Ann O’Sullivan, Phyllis Kenny and his sister Goldie Newport.

Another lifelong interest was hunting which holds a special place in Fethard folklore. His association with the Tipperary Foxhounds was legendary, especially on opening day and New Year’s Day and in 2008 he was honoured with Life Membership for his dedication and support.

REPORTING AT ITS BEST

Another huge interest was with the Ballyluskey White Heather Harriers for their Sunday meetings from November to March. Tony’s knowledge of townlands, landmarks and places around Fethard was without parallel and his lyrical descriptions of the hunt, carried regularly in The Nationalist, was reporting at its best.

Another of Tony’s big interests was the Killusty Pony Show where he was always so obliging when asked to judge the Dog Show, reflecting his love of dogs and his knowledge of all breeds.

Never short of the right words for any occasion, Tony was an exemplary Master of Ceremonies for events, especially shows staged by the Hogan Musical Society and town pantos.

Tony’s death leaves a void in so many groups and associations in Fethard - cultural, historic, community and sporting - and he is remembered so fondly in all. He was not only an integral part of the town’s fabric for all of his ninety years but someone who also chronicled the life and times of the town itself and all its people.

Tony Newport died on July 27, 2021. He was predeceased by his beloved wife Mary (nee Kenny) and is survived by his daughters Catherine, Margaret, Liz, Lydia and Edwina, his grandchildren Derek, Mary Jane, Ruby and Isobel, his much-loved great grandchildren Freyja, Leah and Espen, sons in law Thomas, Michael, Bill and John, relatives, neighbours and large circle of friends.

In a fitting tribute to honour and remember a man so immersed in Gaelic Football and a lifetime either playing for or supporting The Blues, his remains lay in repose at Fethard GAA Park where the huge turnout reflected the esteem in which he was held.

The field was Tony’s “second home” and he always referred to it by its old name, the Barrack Field.

Following the repose, his remains were brought to the Parish Church as past and present members of the GAA Club formed a Guard on Honour on leaving the grounds and carried his coffin into the church.

On the following day after his funeral Mass, his coffin was borne from the church by past and present Huntsmen from both the Tipperary Foxhounds and the Ballyluskey White Heather Harriers.

When his coffin was lowered into the ground at Calvary Cemetery, Donie Slattery, Huntsman with the White Heather Harriers, blew the customary Going Home on the hunting horn.