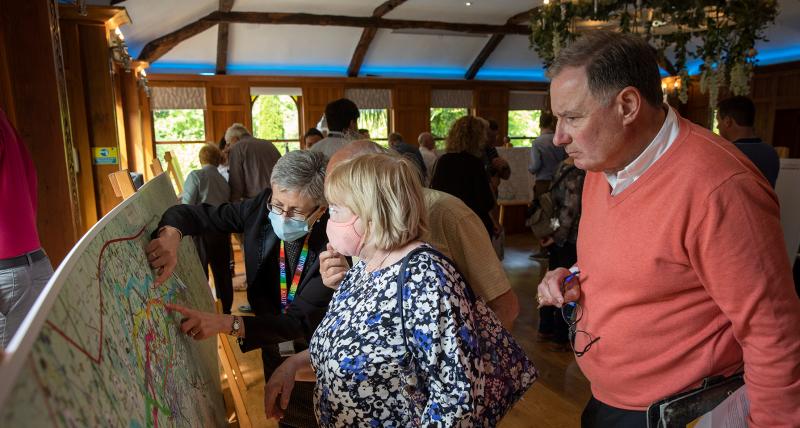 An estimated 1,300 people flocked to public consultation events in three Tipperary towns last week to find out about the route selection process for an upgraded N24 route between Cahir and Waterford and how it may impact their properties.
Four route corridor options for this 60km stretch of the N24 are being considered within a 6km study area around the existing N24 and significantly; they include proposals for bypasses of Clonmel and Carrick-on-Suir where the existing N24 is congested daily with traffic.
Tipperary County Council sent out 4,500 letters to people with properties along and around the four route corridor options inviting them to the public consultation events to discuss the project with representatives of Arup consulting engineers, the firm working on the route selection process.
Eileen McCarthy of Arup said they were delighted with the positive engagement of the public at the four public consultation events they ran four days last week. Each event lasted six hours.
She estimated about 500 people attended the Clonmel event in Raheen House last Wednesday, May 4 while 150 visited the Cahir session in Cahir House Hotel last Thursday.
An estimated 650 attended the Carrick-on-Suir event in the Carraig Hotel last Friday while about 240 people visited the first event in Mooncoin Community Centre in south Kilkenny on Tuesday, May 3.
The ballroom of Raheen House in Clonmel was teeming with curious visitors scouring over large maps and information boards and speaking to the experts from ARUP consultants shortly after the public consultation session opened.
Farmer Mark Joseph Mulrooney, whose farm is located between Kilsheelan and Carrick-on-Suir, was one of the property owners who called in.
The N24 project is a big worry for him as one of the route corridors will split his farm in two if it’s chosen as the eventual route.
He said he only inherited the farm three months ago.
He was bringing away all the information he was given at the public consultation event to study it in his own time at home.
The Nationalist also spoke to another landowner in the Brunswick area near Clonmel concerned about the new road splitting his farm.
The landowner, who didn’t wish to be named, welcomed the hosting of the public consultation events.
“There is plenty of information and it’s such an historic project. I was chatting with one of the engineers from Arup. He was saying they would consider this as one of the most sensitive projects they have taken part in because there is so much detail in the planning of this project from the point of view of farmland, residential properties and built heritage. There are so many elements.”
He said the road project will have wide ranging consequences for a lot of property owners. Seeing a road running through the middle of a farm was difficult and how this project progresses will be down to the level of compensation landowners receive and the level of respect shown to property owners and their rights.
From the four corridors currently under consideration, a preferred route option for the Cahir to Waterford section of the N24 will be selected by the middle of next year and its announcement will be followed by a further public consultation process.
Ultimately it will be up to the Government to decide when and whether the upgrade of the N24 from the M8 Junction 10 Cahir North Roundabout north of Cahir to the outskirts of Waterford city goes ahead by allocating the necessary funding.
Tipperary County Council Director of Services for Roads, Marcus O’Connor, said the width of the new N24 hasn’t been decided yet.
Each of the four corridor options under consideration are 300m in width but Mr O’Connor stresses that the corridor only indicates the lands within which the final selected route could be developed. The final route corridor will be much narrower.
One of four corridors is the Management Corridor Option. Mr O’Connor explains it means upgrading or managing the existing N24 route through improvements, minor realignments and traffic management measures.
The other three route corridor options run north of Clonmel, Kilsheelan and Carrick-on-Suir with the furthest Blue corridor route about 4km north of Clonmel while the Yellow corridor, which swings furthest north of Carrick-on-Suir is about 3km from the town.
Depending on the outcome of the public consultation process, the design team may opt to switch between corridor options to form a hybrid route corridor in designing the final preferred route.
Eileen McCarthy said improvements to public transport are also part of the public consultation process and will be a central part of the planning application for the N24 route.
She said one of the main concerns people raised with them last week related to the 300m width of the route corridors. They assured property owners the final route corridor won’t be this big. There was also a lot of concern about the Management Route Corridor running through Clonmel and Carrick-on-Suir. Ms McCarty stressed if this option was chosen, the intention was to work within the land currently in public ownership along the existing N24. It wasn’t intended to impact existing housing estates and businesses.
Both Ms McCarthy and Marcus O’Connor are encouraging people living in the areas that will possibly be impacted by the project to find out about it and make their views known by making a submission to the public consultation process.
Eileen said they received invaluable information from the public consultation events about local culture and history such as waymarked walking routes that will be taken into account in the design of the final route. Maps and information on the N24 Cahir to Waterford route selection process are available on the project website: www. n24waterford2cahir.ie.
Submissions can be made via this website of by emailing: N24Waterford2Cahir@
kilkennycoco.ie. Submissions can also be posted to: N24 Waterford to Cahir Project, Kilkenny County Council, County Hall, John Street, Kilkenny.
The deadline date for submissions is Friday, May 20.