YESTERYEARS: One third of Cashel pharma workforce to be laid off 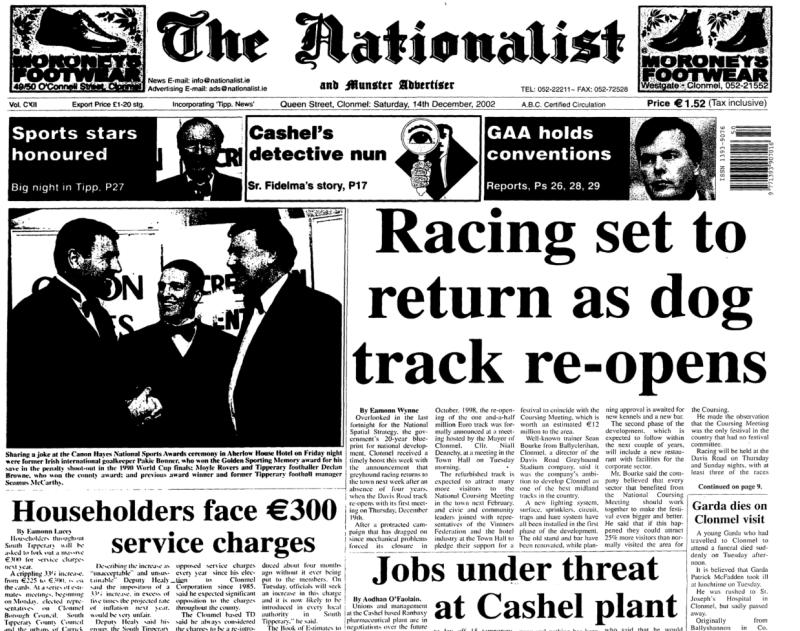 The front page of The Nationalist on December 14, 2002

Our Yesteryears feature this week goes back 20 years to a week when our front page led with a good news story on December 14, 2002.
That week Clonmel had received a timely boost with the announcement that greyhound racing was to return to the town after an absence of four years. After a protracted campaign that had dragged on since mechanical problems forced its closure in October 1998, the reopening of the €1.5 million track was to take place a week before Christmas on December 19, wrote Eamonn Wynne.

Another front page story that week informed readers that unions and management at the Cashel-based Ranbaxy Pharmaceutical plant were in negotiations over the future of a third of the factory’s workforce. The Indian- owned plant had announced the previous week that they were looking for a total of 33 lay-offs. Just over 90 people were employed at the facility in 2002.

That week also we carried a report about six men being arrested in Clonmel in connection with the fatal stabbing of a 21-year-old Clonmel man following Halloween celebrations in the town. Five houses were raided in a 7-8am swoop and six males, between the ages of 18 and 20, had been arrested.

“Cruel thieves steal Santa” headlined another article that week in which Eamon Lacey reported that thieves had disrupted the Christmas preparations of a Tipperary Town family whose lighting features were taken from outside their home. School children Leandra and Chantelle Lonergan (10 and 8) were greatly upset to make the discovery one morning as they headed off to school.