A colourful and fitting tribute to the Volunteers who accomplished a significant step towards Ireland’s freedom and Independence 102 years ago. 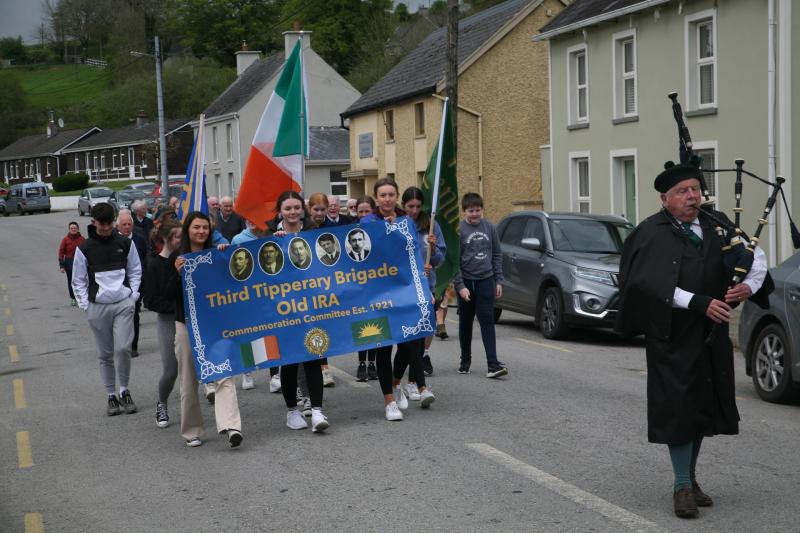 On Sunday, May 8, the Third Tipperary Brigade Old IRA Commemoration Committee commemorated the centenary of the burning of Hollyford RIC barracks on the night of 10/11 May 1920.

The event had to be postponed for two years due to the lockdowns and restrictions arising from the Covid-19 pandemic.
The village was a riot of colour, bedecked by tricolour flags and bunting. Proceedings began with a parade from the old creamery to the square in front of the former barracks. It was led by Gerry Neville, pipe major of the Seán Treacy Pipe Band, Moycarkey. He never misses an opportunity to honour the patron of his band. 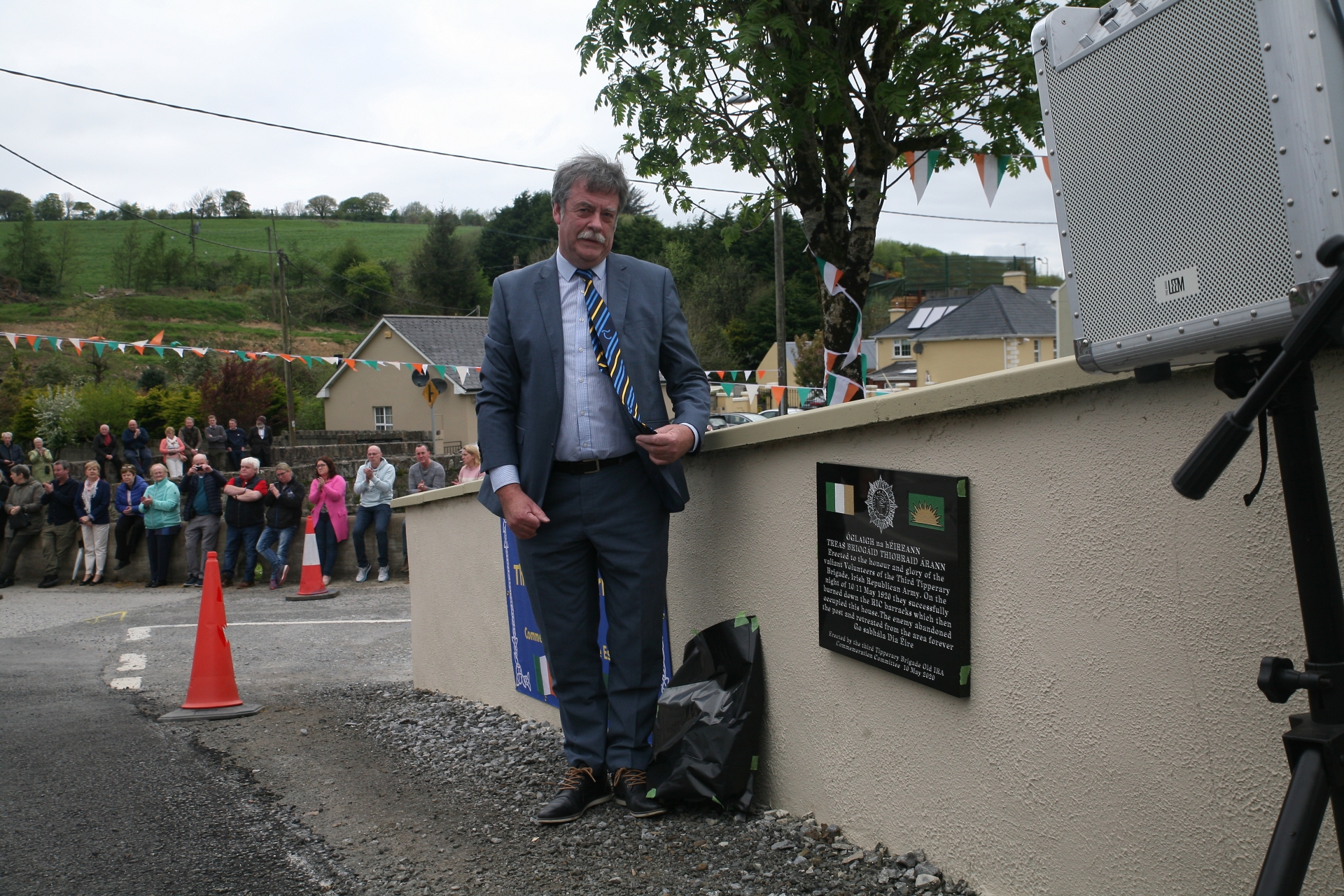 A group of local teens carried the Commemoration Committee’s banner and others bore aloft the Tricolour and the iconic “Irish Republic” flag which had flown over the GPO in 1916, and also the flag of Cumann na mBan.

They were followed by a contingent of pupils from the local National School, officers and members of the Committee, and a large crowd which included many descendants and relations of those who’d actively participated in the IRA operation a century ago. 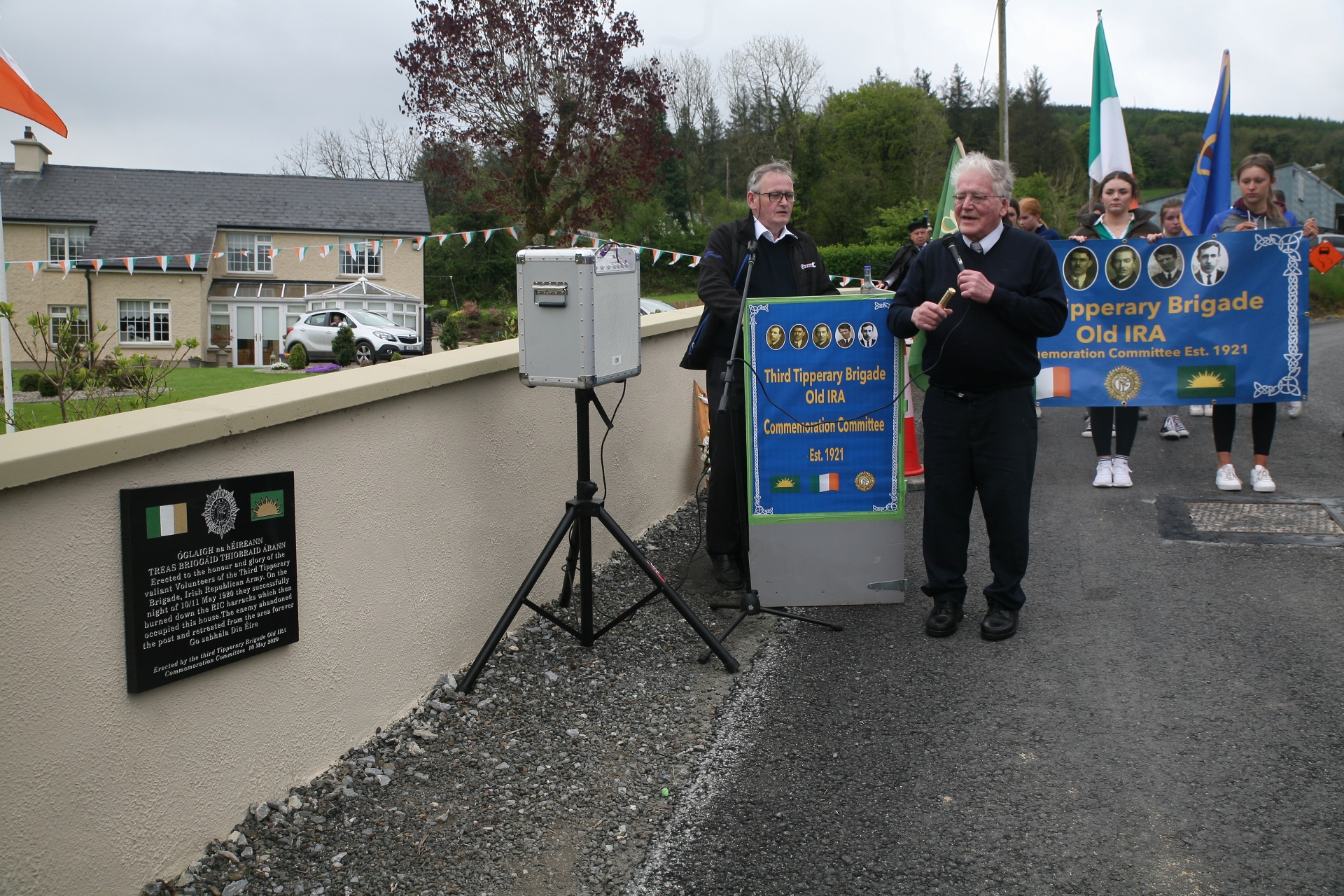 The ceremony was ably and efficiently conducted by MC Joe O Connell, the Committee’s Treasurer. Cathaoirleach an Choiste, Pat English, unveiled a plaque on the garden wall of the former barracks. It was blessed by the local PP, V. Rev. Fr. Dan Woods, who said a few very appropriate words for the occasion.

Wreaths were laid as follows on behalf of the Committee by the secretary Neil Ryan.

For the Volunteers of the Third Tipperary Brigade IRA by T. J. Ryan (L), son of John C. Ryan (L), QM of the Third Battalion and an active participant in both the planning and action in 1920.

Pakie Ryan (S. Ó), laid a wreath on behalf of “C” Company (Hollyford) Irish Volunteers. His father too had been present a century ago. 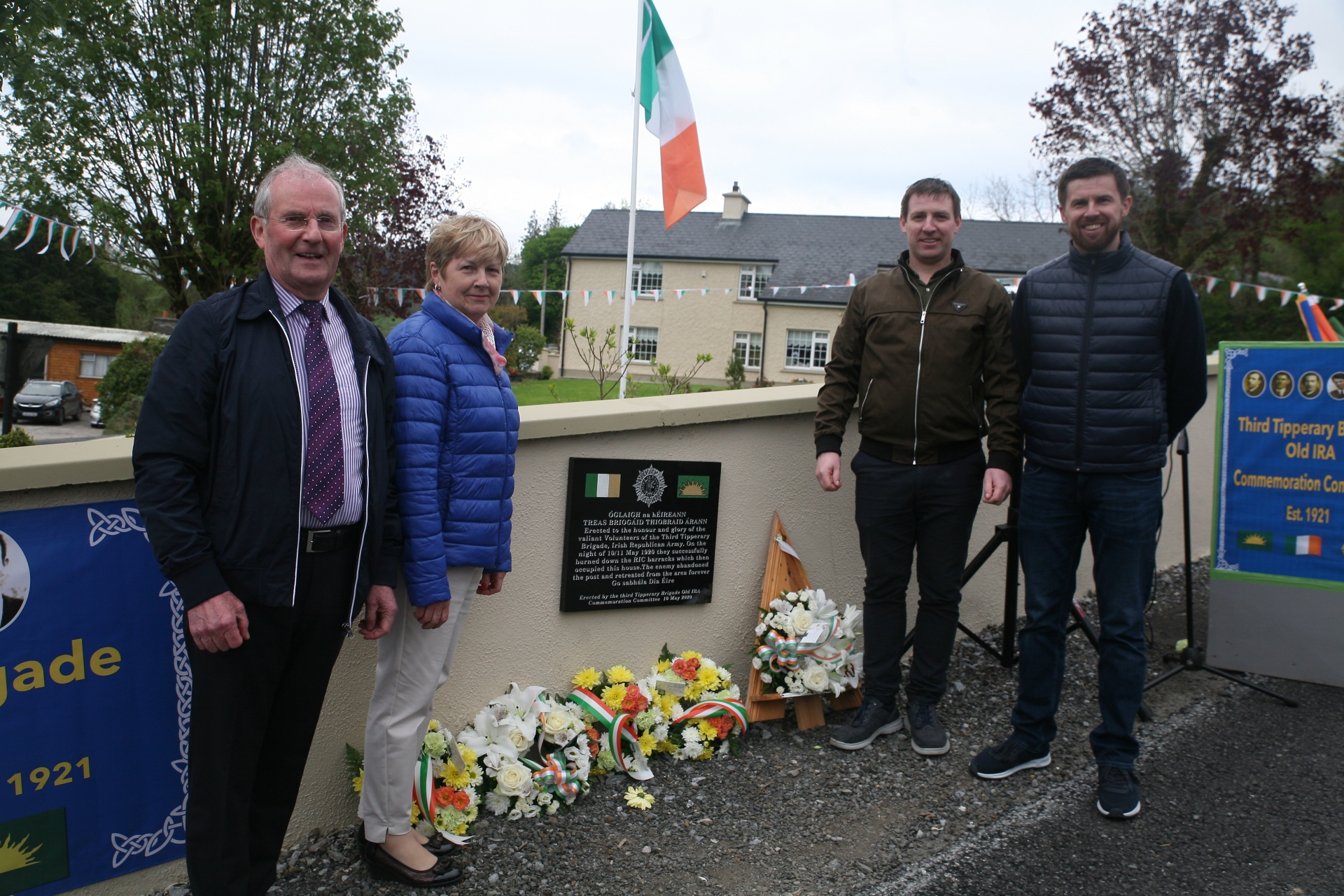 Above: Phil & Mary Ryan and their two sons with their residence in the background

Next Cecelia O Brien laid a wreath in memory of Cumann na mBan.

Lastly Phil Ryan, who now resides in the former barracks, laid a wreath on behalf of the Hollyford Community Council.
A decade of the Rosary was recited as Gaeilge by Laoise O Keeffe of Glenough. The 1916 Proclamation of the Irish Republic was sensitively read by Tommy McGrath. This was followed by stirring Nationalist ballads from Leona Ryan, a near relation of James Quinlan, Captain of the Anacarty IV Company, and then by Jacinta Ryan.

A short oration was delivered by Kevin O Reilly, Committee PRO. In it he recalled the significance of the burning for the IRA and its contribution towards establishing a new native administration. He gave a complete description from two different sources of the events of that May night in 1920. He also listed the names of those Volunteers who had participated in the burning and who died before May 1923.

The MC thanked and praised all those who had attended, either on the day or at the events of the two previous evenings which had been organised by the Community Council. The event concluded with the sounding of the Last Post and the playing, and singing, of Amhrán na bhFiann.

The most pleasing aspect of the event was the presence of a very large crowd. It included people from as far away as Tyrone and Cork and everywhere in between. Many relatives of the Hollyford IV Company, along with others from the Third Battalion and the Third Brigade, honoured the organisers by their presence. All agreed it was a colourful and fitting tribute to the Volunteers who accomplished a significant step towards Ireland’s freedom and Independence 102 years ago.