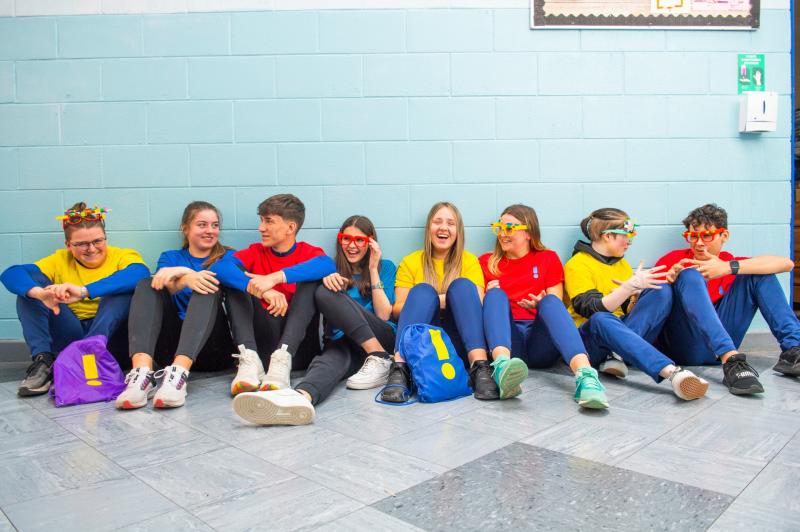 Some of the students from St Joseph’s College, Borrisoleigh who took part in the Big Idea programme. Picture: RUTH MEDJBER

A team of students from St Joseph’s College Borrisoleigh has won in the equality category of this year’s Big Idea Challenge competition.

The winning team IEJ INC. made up of Isaac Brophy, Jessica Murphy, and Emma Davis, won their award for their ‘theoretical’ social media platform for young members of the LGBTQ+ community, Spark Youth.

In a video describing the process of developing the project on the Big Idea website, Isaac Brophy said:

“Our chosen topic was equality, and what’s more equal than equal rights and the right to be treated as equals.”
Spark Youth

The idea was to provide a safe space for members of the LGBTQ+ community from online hate and abuse.

In order to join the site, a person would need to have a registered login with a recognised LGBTQ+ organisation like TrevorSpace, Aven or BeLonG To.

Isaac said social media platforms ‘pander’ to the LGBTQ+ community, only doing the bare minimum or only for occasions like Pride month.

In their proposal, the team say:

“We wanted to create a social media space where LGBTQ+ teens could have a space to themselves.”

“This project left a lasting smile on our judges’ faces.The application of the creative process really came through on this project and ticked all the boxes.The fact they made a website that authentically meets the needs of an LGBTQ person was absolutely phenomenal,” said Ms Mackenzie-Doyle.

The team was mentored by Ms Mary Gorey, a teacher at St Joseph’s College in Borrisoleigh.

As category winners, the team in Borrisoleigh will receive a bespoke medal.

Around 2,000 young people from schools around the country took part in the programme this year.
The Big Idea is a 15-week programme for young people between 15 and 16 years old in Transition Year, Leaving Certificate Applied and Youthreach.

It gets young people thinking about societal issues and how they might solve them.

With the help of their mentors, young people create proposals for projects to address a chosen issue in the categories, mental health, climate change, equality, healthcare and the housing crisis.

The overall winner receives a trophy and a cheque for €2,000 to share.

They also work with Fjord to develop their Big Idea,

The overall winner this year was St Leo’s College in Carlow for their project Trash Scan.

This year the programme was also supported by 39 industry partners, including CJ Fallon, Aerogen, MSD, Netwatch and the Royal Institute of the Architects of Ireland.

While IEJ INC won in their category, the school also had other teams taking part in the Big Idea.

Another team at the school worked on a project to help teenagers with their mental health.
Student Harry Groome told the Tipperary Star a little about his project.

“Our project aimed to help teenagers with their general mental health.
“Our concept was to invent a watch which calculates and monitors your serotonin levels.

“This correlates with how happy you are at a given time.
“If serotonin levels read low, you can do something to improve them,” explained Harry.

The Big Idea projects use technology to help people and make the world better.

This was something Harry said he and his team embraced.

“In the Big Idea, we learned about all kinds of people and how they struggle In their daily lives.
It helped us with opening our minds creatively and brainstorming ideas so we could help people change their lives for the better,” said Harry.

The Big Idea projects are available to view online at www.exhibition.thebigidea
.ie/blog/

Arts Council announces over €47m in Strategic Funding for 2022