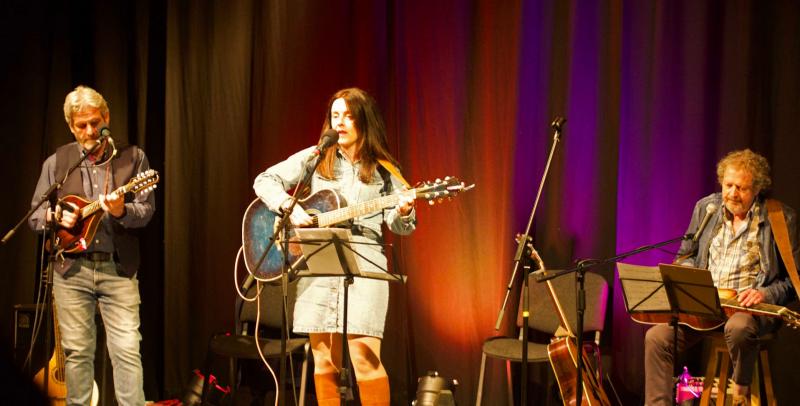 Martin Murray, Maria O’Shea Enright and Gay Brazel performing in Brewery Lane Theatre during the And The BEAT Goes On Festival

The inaugural And The BEAT Goes On performing arts festival in Carrick-on-Suir was a huge success last weekend despite bad weather moving the three days of free live outdoor performances indoors.

This festival was planned for the grounds of Carrick-on-Suir Heritage Centre but as it rained the entire weekend, the organisers brought the performances indoors to the Nano Nagle Community Centre Chapel last Friday and to Brewery Lane Theatre on Saturday and Sunday.

“We had full houses each day with great listening audiences who were blown away by the talent,” said festival organiser Linda Fahy of Carrick’s Tudor Artisan Hub.

She said funding the festival received from the Local Performance Programming Scheme (LLPPS) enabled them to showcase a broad range of amazing talent in new ways.

“We engaged with performers from ages 16 to 70s in dance, spoken word, creative writing, drama, a wide range of music styles including hip-hop,rap, rock/pop, acoustic rock, folk-blues and gypsy-jazz.

“The event brought in new performers travelling from Limerick, Naas, Dublin, Athy, Ballyporeen, Clonmel as well as new audiences to the venues. We also had the pleasure to work with two amazingly talented dancers from Ukraine, now living in Carrick-on-Suir.”

Linda thanked all the performing artists and all involved in organising and supporting the festival.