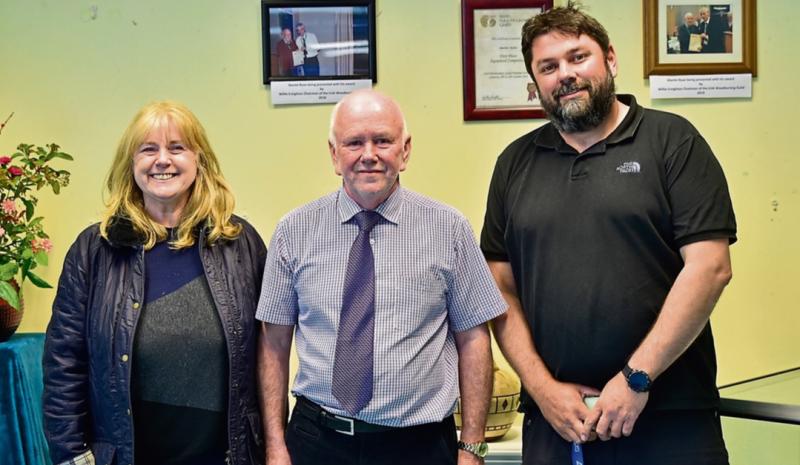 The successful exhibition of Clonboo Woodart in Templemore Library that was officially opened by Michael Lowry TD on March 31 was extended for several weeks.

It was topped off by a visit from RTE’s Nationwide. Helen McInerney was front of camera and the cameraman was Des Carolan.

They began their day by filming at Martin’s home and in his workshop in Clonboo, Templetouhy.
This is where Martin creates his segmented woodart which has won many accolades from experts in the field of woodturning and art circles.

They filmed Martin at the lathe turning one of his pieces. He explained how the art form moves from his imagination to reality.

The Nationwide teams’ next port of call was to the exhibition in Templemore Library. They were welcomed by the library staff, Ann Loughnane and Margaret Looby.

Here they filmed the art on display and Martin spoke about the official opening night and the support he received from family members, neighbours, friends, crafts people and mentors from the Design and Crafts Council Ireland, of which he is a member. He thanked the library for affording him the opportunity to display his art.

Denis Kenny, now retired from the Library, spoke about the value of the exhibition space for local artists. The space is free and it’s a win-win situation for both the artist and the library. The Nationwide programme was aired on Wednesday July 6 this year and can be accessed on the RTE player up to August 5.

Des Carolan, the cameraman, was so impressed with the artwork that he brought his wife back on another day to see the exhibition. Martin’s artwork can be viewed on his website www.clonboowoodart.com.