“ The Chief” Liam Lynch commemorated on a Tipperary hillside 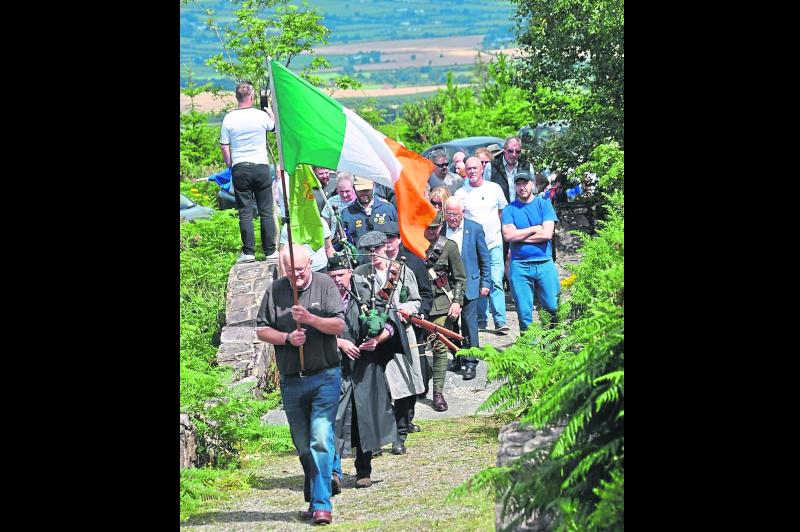 Some of the attendance at the Liam Lynch commemoration

“From faraway places we have come to this Tipperary hillside to pay tribute of remembrance to one
of Ireland’s unyielding soldiers and in the name of the living Republic to honour every man and
woman, who has striven and fought and died for Irish Independence through all the generations.”
The opening lines spoken on the 7th April 1935 by Brian O’ Higgins in his oration at the unveiling of
the Liam Lynch monument on the slopes of the Knockmealdown mountains. And so on Sunday 31st
July 2022 the well trod path up the side of the Knockmealdown mountain, which Republicans have
ascended to the sacred spot since 1935 was again being used.

Nowadays cars are the favourite mode of ascending the mountain although there was a few ‘pilgrims’ on foot. Tipp fm had run a nice part of speaker “ Tomas Mac Conmara’s interview on the hour every hour from 9am at the end of each newsreel all Sunday morning and fair play to them for the coverage, its why local radio holds a special place in peoples life’s. Social media sites were also covering the 99th commemoration of
“The Chief” with great snippets of the life story of Liam Lynch up on various sites.’

Eire Go Bragh’ flags guided the faithful from Goatenbridge village up the side of the mountain. From 1pm a steady trail of dust could be seen as cars made their way along the stony mountain path. When Liam Lynch and
the IRA Flying Columns were traversing this mountain it would have been barren and the ‘lads’
would have been grateful to be received in the many Safe Houses in the foot hills and along the
slopes of the Knockmealdowns , that provided much needed shelter, food ,and a place to lay their
weary heads if only for a few hours.

This area of Tipperary has a proud tradition of sheltering the’
Irish Rebel’ through the generations who because they loved their country and stood against a
tyrannical British empire, became the hunted in their own land. From Fr.Sheehy to Michael Doheny
to Sean Hogan and Dan Breen and the wanted men of the ‘Flying columns ‘,that all passed this way.
The many boithrins,mass paths, Holloways, double ditches ,provided the hidden routes that the IRA
Flying Columns used to prosecute their Guerilla war against the tyrannical occupiers.
The local IRA was led by Sean Prendergast with Sean Myles his no2. These men would have
organised ‘billets’ for the men of the Flying Column when they were staying locally and ensured their
safety ,providing armed sentry’s ,and scouts and spotters to ensure their area was ‘safe’ and a type
of ‘exclusion zone ‘was created ,so no one came or went without the knowledge of the local IRA
Active Service Company. The area was basically in lock down with scouts on high ground and
strategic points on roads and boithiríns during daylight, and armed guards at night. When word was
sent by messenger that the ‘boys’ were on the way these small farmers,shopkeepers,labourers,
were on a ‘war footing’.