Making a Mark: The artist attributes his success to a steadfast work ethic and love of his craft 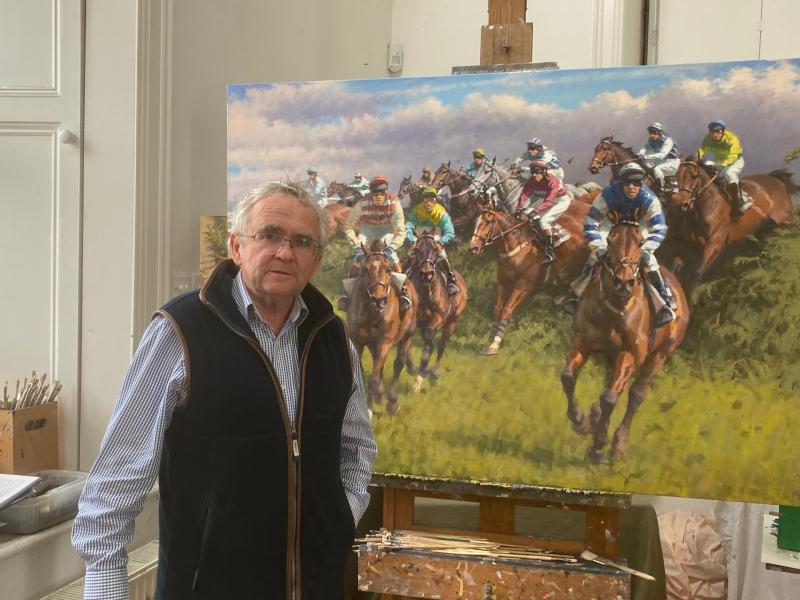 Peter Curling at his studio that he attends daily, pictured with a current work in progress

Tipperary is home to a world-class horse racing industry and for artist Peter Curling, this vibrant world often provides a source of inspiration for his renowned works.

Based in Goold’s Cross where his home, stud farm and studio is located, Peter’s work can be defined for its ability to capture the distinct energy of horses and their riders.

One of Peter’s most recent works is a depiction of equestrian Cian O’Connor show jumping with the world-famous Kilkenny. Isolated on the canvas, the painting renders the dynamic relationship between man and horse.

“He was a fantastic horse. I’m very lucky to have painted him and to have seen him at his best,” said Peter.

Born in Waterford, Peter displayed an interest in drawing from an early age. His mother noticed his talent and submitted one of his early sketches to Parent’s Magazine.

“I was four-years-old at the time and it won the competition.”

Growing up surrounded by horses, he soon made a name for himself as a skilled painter of this subject.

Aged fourteen, Peter held his first exhibition in Lambourn that was followed two years later by a well-received display at Dublin’s Combridges during horse show week.
“The horses excited me,” explained Peter. “I was lucky enough that the subject that I like is a very popular subject and it has got so many different aspects to it. It has movement, atmosphere and action, and the variation between horses exercising in the morning, winter racing, hunting, a sunny day at The Curragh; each has its own unique feel.” 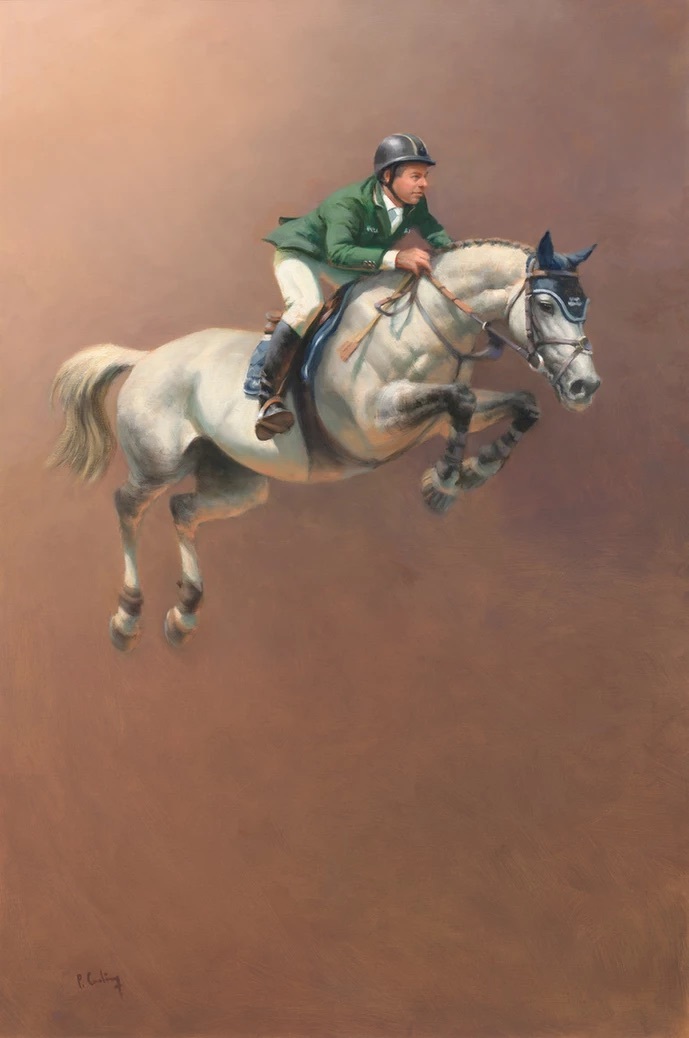 Peter studied at the world famous Signorina Nera Simi school in Florence followed by working with sculptor John Skeaping in France. His varied education provided an opportunity to diversify his practice, with his oeuvre containing a vast array of landscape and portraiture.

“Draftsmanship is important to me,” explained Peter. “You have to be able to draw before you can do anything else. If you don’t have that coordination between hand and eye, you are really struggling. That was always the most paramount thing for me.”

Drawing inspiration from masters like Tiepolo, Rembrant and Rubens, Peter is interested in their shared ability to capture energy alongside anatomical accuracy.

“You have got to have a good knowledge of the history of art to appreciate all of its different aspects.
“What’s gone before is as important as what is going on now. I always admire artists who have a facility to paint with confidence, quickly and paint flows, it’s alive.”

The rolling hills and historic landmarks of the Premier often feature in the artist’s work, with his limited edition prints of The Rock of Cashel and The Galtees popular with buyers.

A love for travel is also evident with Venice, France and England frequent subjects of his paintings. This diversification is essential for Peter’s practice, allowing an exploration of many artistic avenues without exhausting a single subject.

“I want the freedom to do what I want to do. I do like a commission that is a challenge, it’s rewarding when it comes off and you have a satisfied client, but I don’t like having a list of twenty pictures I have to do because then it becomes a chore.”

Living a life immersed in art, Peter’s wife Louise is also an accomplished artist and the pair exchange advice and knowledge on their artistic endeavours.

A creative of many mediums, Peter used the lockdown to write his first novel called: Drawing the Line.

“Funnily enough, it is about an artist from Tipperary who spends some of his time in Venice, which I do too!

"I did quite a lot in lockdown. It was grand, there were no distractions, I was able to carry on. My studio is over the field so I was able to walk over there, I could really get into the work.”

Peter refuses to embrace weekends and follows a rigorous routine that means being in his studio or out on the fields daily.
A converted farmhouse, the floor of the studio is used for painting and can be observed from the mezzanine level also used for printmaking. While an artistic talent has formed the foundations for his success, it was a persistent work ethic that sustained his long standing career in the Irish artworld.

“You’ve got to keep going. If I’m not painting daily, I go off the boil, my work standards drop. It’s also something that I am lucky to get a lot out of.
“I’m a bit hesitant to use the word enjoy, but it’s a thing that if I don’t do it I feel as if I’m not fulfilled or I feel frustrated that I am not working to the top of my game.”

Maintaining such concentration is a balancing act that runs the risk of overworking the picture, something Peter is keen to avoid. His process of painting involves creating a host of sketches and watercolours of the subject to perfect the composition and likeness before bringing the final idea to the canvas.

Peter works in a range of mediums including oil, charcoal, watercolour and sculpture, and this dynamic approach allowed him to constantly evolve as an artist.

While an accomplished painter of landscapes and portraits, there is one defining subject that will forever provide a source of inspiration.

“Horses are very intelligent and beautiful animals. They are very expressive, basically they are flight animals so they are very conscious of fear or danger and that comes across in how they perceive things.
“It also comes across when someone can build up a relationship with them and they have confidence in each other. That’s really special and something I have been very fortunate to witness.”