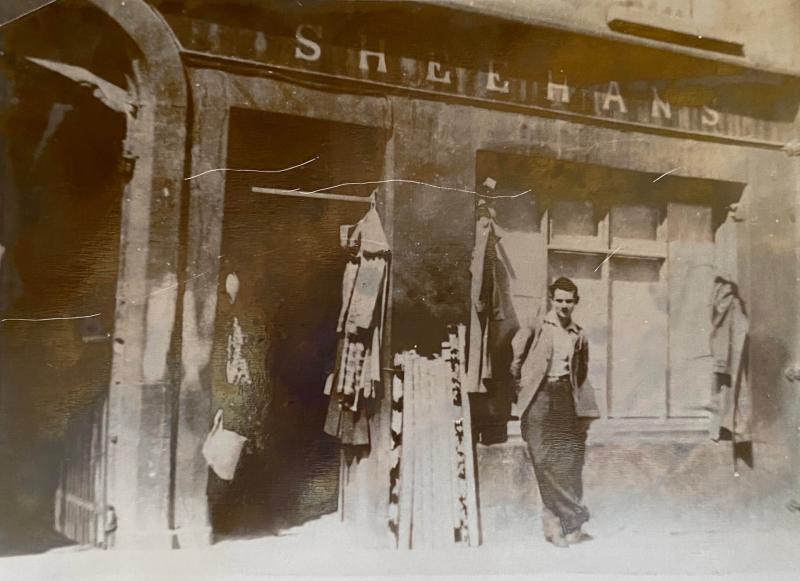 Gerry Sheehan outside his drapery shop in 1951

Few generations have witnessed more profound social change than older members of our communities and many residents of Cahir hold crystal clear recollections of bygone days.

Denis Ryan recalls when he first moved to Castle Street, the park by the castle was simply a war monument and a field. The area now hosts a prosperous farmers market and attracts droves of tourists.

After serving the town during his forty year career with the ESB, Denis noticed a complete transformation of Castle Street.

“The changes I have seen in Cahir are remarkable. The bypass has changed everything, Castle Street on a Munster Final day you could not get across for hours, it was bumper to bumper.”

Before the current motorways, Cahir served as the crossroad of Ireland and acted as merging point for travellers enroute to Cork, Limerick, Waterford and Rosslare.

Cahir has welcomed countless visitors, with Denis often observing the magic of royal visits and film productions from his living room window.

“Where we are living here has been cordoned off many times, with film productions taking place.” Denis believes the town’s famous Castle and Inch Field is finally being utilised to its full potential, with tourism rocketing for the town.

“All the investments are well worth it now, as every Sunday in Cahir is just the greatest thing around, with the field hosting bands, dancing and tourists. It’s just brilliant.”

Kitty Ryan of Kilcommon can recall early childhood memories of Cahir such as being in awe of the terraced houses compared to the detached country farmhouses from her native Knockgraffon.

For years, the Going and Smith Mill was a major employer for the town, cultivating a hub of activity and prosperity.

It also shaped the town due to its self-sufficient production of hydroelectricity, with the headrace near the arches of Abbey Street, and the tailrace located at the back of the Inch Field. 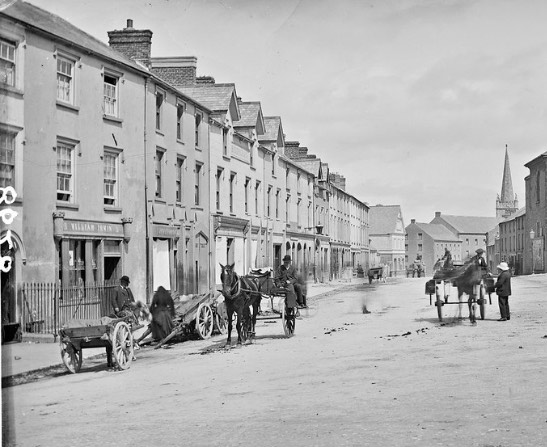 “The mill was marvelous and it was what made Cahir thrive. It would take in the corn and turn it into wholemeal and flour. They had a massive staff of two to three hundred working there day and night,” remembers Kitty.
“The machinery never stopped. Everyone was working there and the town was buzzing.”

Due to fuel rationing, petrol was scarce and trade in the town was dependent on transporting goods via a cart driven by a diligent Clydesdale horse.

Townsfolk could dream of the eventual popularity of cars as mechanic Bill Bourke had a Model Y known as the Baby Ford on display for the locals to admire during the lean war years.

“By seeing the car and being able to look into it, they would think ‘wouldn't it be lovely to have one to sit into in comparison to cycling or using a pony and car!’”

Dancing was a popular social outlet facilitated throughout the town, held in locations such as the parochial hall, the Galtee Hotel ballroom and occasionally Cahir Castle.

“The dances of Cahir were smashing,” said Kitty. “They would last into the night, starting at nine and it wouldn’t be over until three in the morning. There were some lovely nights.”

Another important element of the town was the railway station that once served as the epicentre of trading, particularly during fair day when livestock was transported to buyers in Waterford and beyond.

Kitty can recall farmers from the surrounding catchment area bringing their livestock into the town as early as four in the morning for the fair day held on the last Wednesday of every month, followed the next day by a bustling pig market.

As the traders were in the town before dawn to set up for the market, a tea room run by Mrs Moore on Church Street provided much-needed refreshment.

“Mrs Moore would provide the farmers with a lovely cup of hot tea and a scone. It was marvelous when you think of it as she was so ahead of her time,” said Kitty.

Buyers would bring cattle to Abbey Street where carriages waited especially to transport the livestock.

A pig market was held the day after, with the whole square of Cahir decked out with creels and horses. 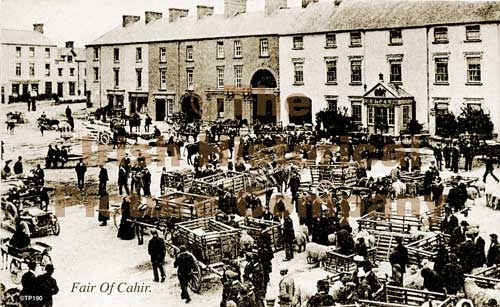 All shops and houses placed precautionary palings on their windows and doors to prevent any damage by the livestock, however on one particularly eventful fair in 1951, the measures were in vain for Gerry’s shop.

“I was standing in the shop when I saw the bullock hit the window and before I knew it he was in the shop and he turned around inside,” remembers Gerry. “The farmer was mortified!”

Gerry observed the changing times through the lens of his popular shop. Sheehan’s Drapery was first opened in 1926 by his mother, and Gerry spent 58 years serving the town.

After the war when the rationing was eased, Gerry remembers the Baby Ford was replaced by the Ford Prefect and Anglia sold by Bill Bourke’s garage and the Morris Minor championed by Pat Barry.

Drapery alone has changed completely and Gerry remembers days when yards of material were sold to be fashioned by the town's numerous tailors.

There was also a huge demand for hats such as those produced by Gorman’s of Cork, particularly in-demand at a time when all men over forty wore a hat.

Sheehan’s adapted to the changing times by transitioning from a counter-based shop to a modern self-service store in the sixties.

In place since the Victorian era, the counter system of selling involved all of the stock being placed in boxes.

“If a person wanted to come in for something you took out the box and you showed them the different styles by hand,” said Gerry.

“You made a parcel then as we hadn’t any bags, instead there were pieces of paper and you stripped them off as there was no sellotape, you folded up the items inside paper and then with twine you would make a fancy knot.”

The fifties was a time of mass emigration from Ireland, and Sheehan’s catered for the demand of suitcases by having a special luggage room in the shop.

As many residents of the town became the generation to rebuild war-ravaged England or the industrious United States, their absence was felt in the town.

“You could look at a school photograph taken in 1950 of your class and look at that same photograph in 1975 and there would be about four that didn’t go to England or the United States,” said Gerry. “Many of my friends went to London or Manchester.”

While the town has undergone incredible change, Gerry believes the future is bright as Ireland is continuing to grow in prosperity.

The biggest challenge facing clothes shops is the competition of online shopping, something he believes will be taxed in the coming years to prevent further decline of the country’s main streets.

While time can only move forward, Gerry insists there is a beauty in recalling the past.

“When you get older, the memories aren’t bad. There’s a vitamin in them,” said Gerry. “It’s like closing a good book, you’re sorry it’s over now. and you’d love to read it again!”