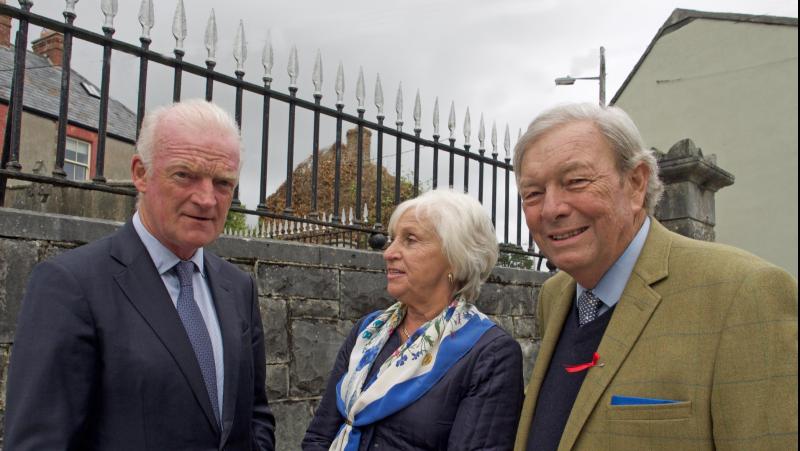 Evie Magnier Stockwell, the mother of Coolmore founder John Magnier, had enjoyed a wonderful and happy life, despite some very harsh knocks along the way, mourners at her funeral were told.

Mrs Magnier Stckwell, who died last Saturday, was buried on Monday following the Funeral Mass at the Church of the Holy Trinity in Fethard, where she had lived in recent years.

Professor Peter Murchan, Consultant Surgeon at Tipperary University Hospital, and a friend of the family, delivered the eulogy at the end of the concelebrated Mass, at which the chief celebrant was Fr Jimmy Egan. 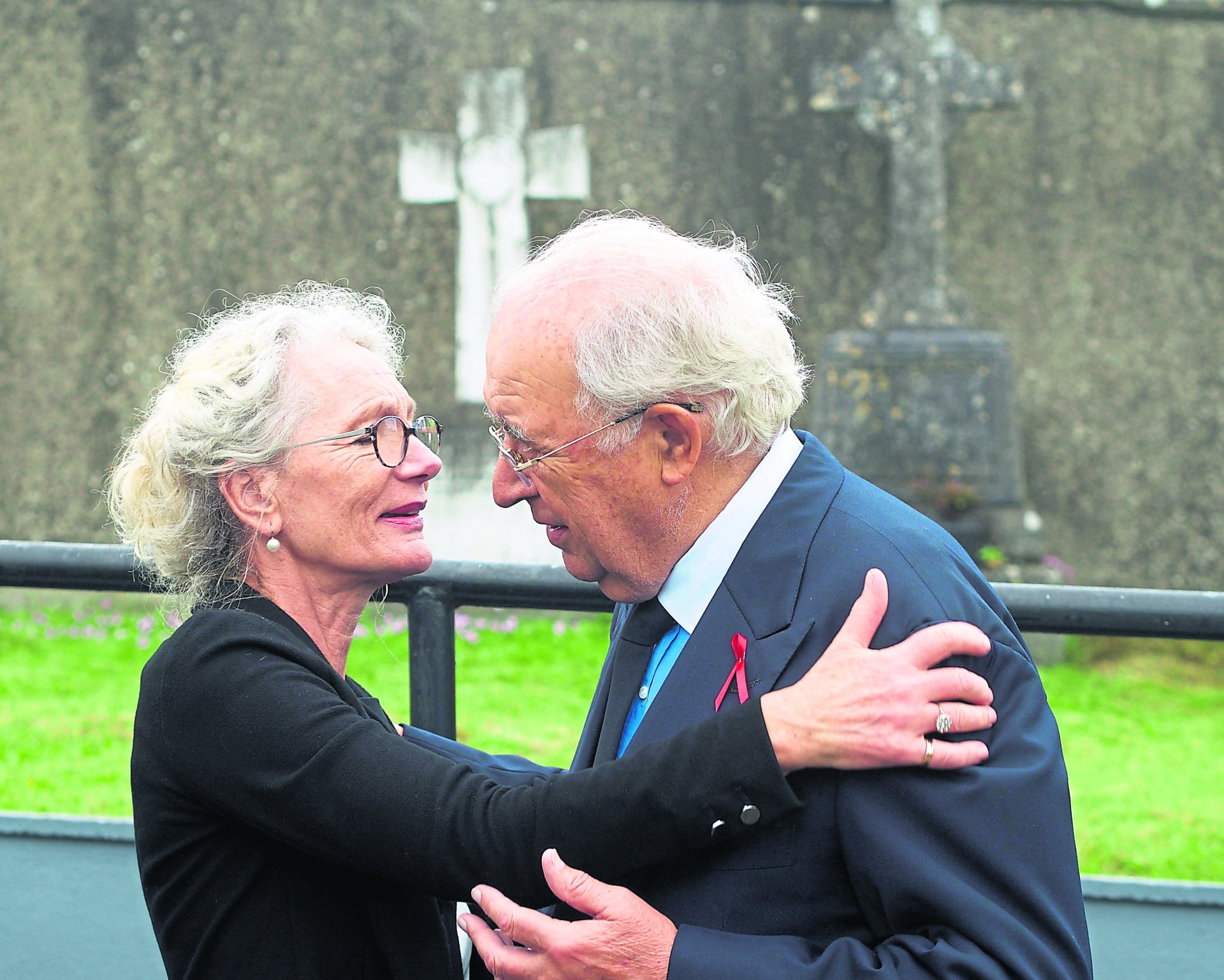 Above: Clare Shanahan, a family friend, offers her condolences to John Magnier outside the Church of the Holy Trinity in Fethard on Monday afternoon after the Funeral Mass for his mother Evie Magnier Stockwell

Professor Murchan said that she possessed "a stoicism and teak-tough mental resolve that she displayed right down to the final furlong."
Evie was born into a substantial family, the Hallinans, who had a very positive work ethic, and she led a very busy life with her adored twin sister Mimi, who had passed away only last month.
She was drawn to the formula of work ethic, effort, fun and family. She witnessed this at home and was able to pass it onto the next generation, including to her grandchildren and great grandchildren.

This inane business acumen and work ethic was unavoidable in her life and was actually part of her DNA, said Professor Murchan.
Before the outbreak of the Second World War, the twins moved to London for their education but were soon evacuated to Harrogate in Yorkshire because the Battle of Britain was raging.
On her return to Ireland she met Tom Magnier at a tennis match in Fermoy in 1946 and it was love at first sight. She later said that the poor man never had a chance. 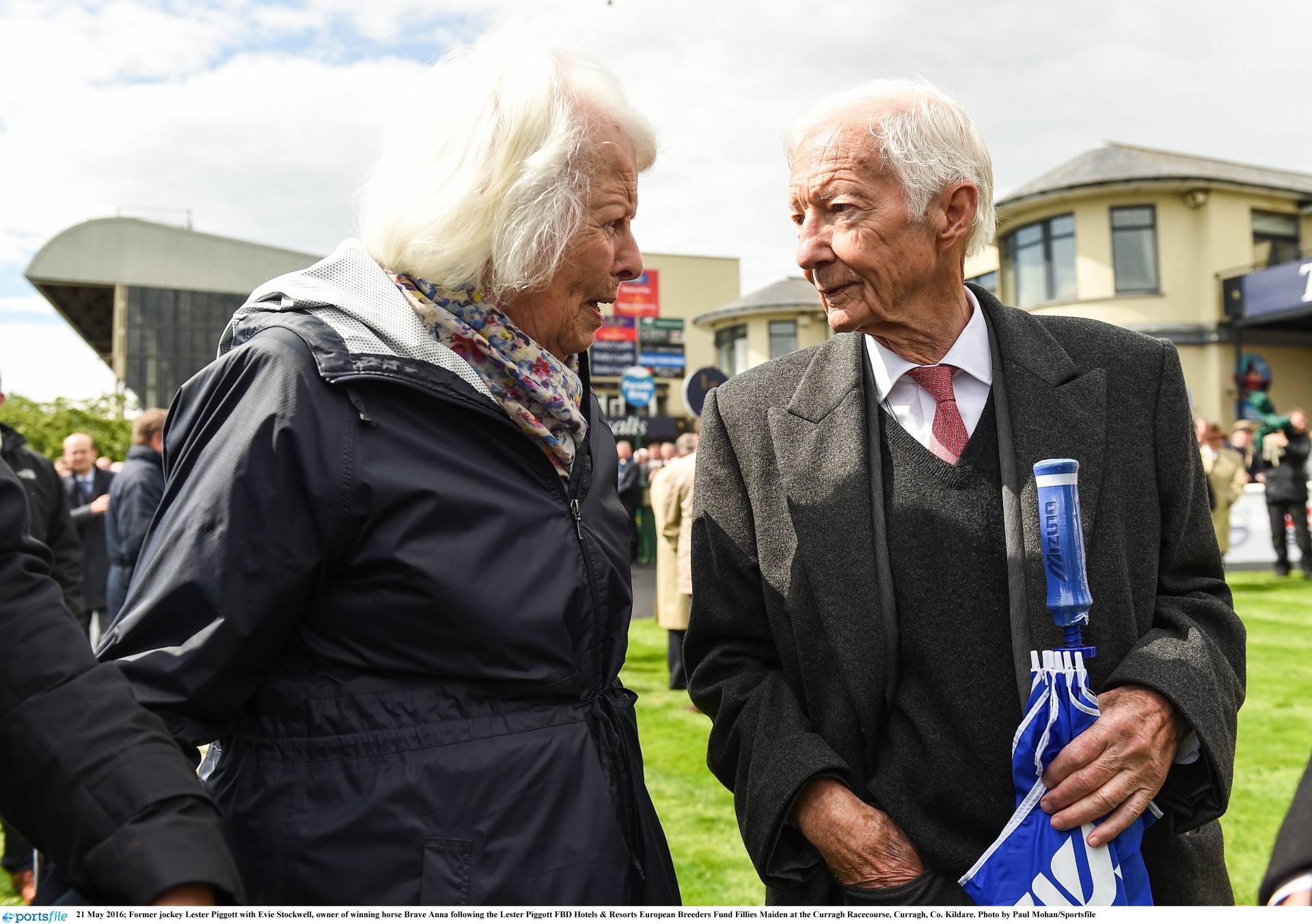 Above: The late Evie Magnier Stockwell, pictured with legendary jockey Lester Piggott, who died in May, was fulfilled by the quantity and quality of her life, mourners at her funeral were told

Despite the arrival of four children in quick succession, she involved herself in the running of the family farm at Grange, near Fermoy the busy stud farm and their other businesses. They had a pub, an auctioneers business and an undertakers.
It wasn’t all hard work, and sport was a prominent part of their life together. She excelled at tennis and golf was the game she enjoyed most. Tom and herself were a formidable couple and they won the national mixed foursomes at Milltown Golf Club in 1947.
Sadly, at a young age Tom became ill and he died when Evie was only 37. Her world collapsed in on top of her at that stage, and the future for her and her children looked very uncertain.
But she rolled up her sleeves, she got her hands dirty and she kicked on, said Professor Murchan.
She held onto her farm at Grange and raised her family, despite the difficulties she faced. It was hard for her when her son Peter predeceased her three years ago but she battled back with her incredible stoicism  and got her mojo back.
She happily watched her children mature and helped them in their own pursuits in life. 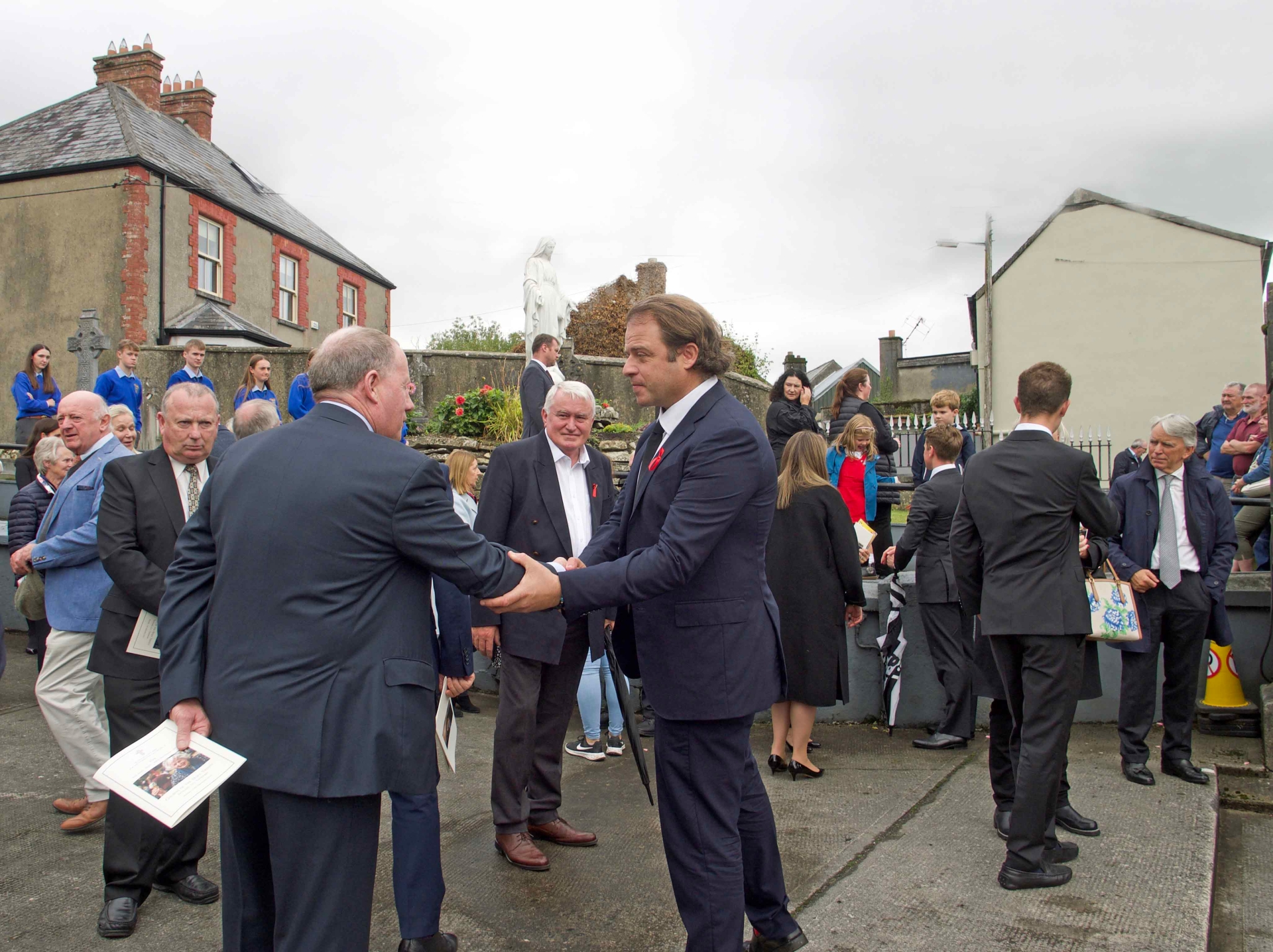 Above: Condolences are paid to Tom Magnier, grandson of the late Evie Magnier Stockwell, following her Funeral Mass in Fethard

Professor Murchan said that her love of horses was quite legendary, considering that she came to them a little later in life. She developed a great love of pedigrees and the nuances of breeding them.
Fillies were her thing, and the wonderful Fairyland was so special, and she enjoyed great success with her, as well as the great racing mare Lahinch.
She loved her visits to Ballydoyle, where she would climb into the jeep with trainer Aidan O’Brien and watch her horses live and in action.
She had moved home a number of times but her gardens, whether she lived in Grange, Lismore, Kilsheelan or Railway House near Fethard, were always perfect, Professor Murchan added. 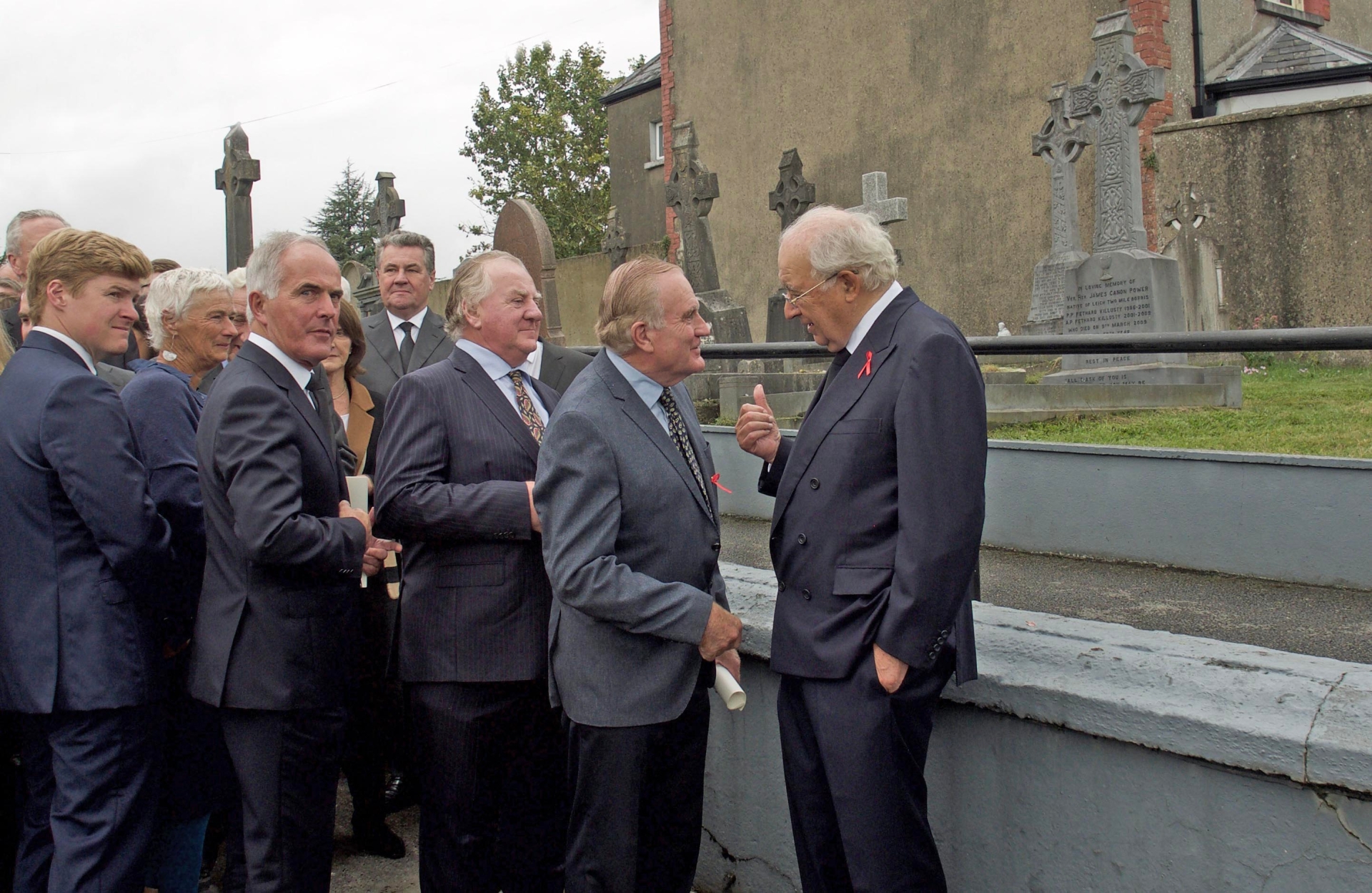 Above: Sympathy is paid to Coolmore founder John Magnier following the Funeral Mass for his mother Evie Magnier Stockwell

The mourners at the Mass, who included Evie’s daughter Anne, sons John and David and her grandchildren, great grandchildren, relations and friends, were told that her biggest passion in life was people.
“She loved people, particularly her family. She loved her family, all of you, no matter what you did. She loved you unconditionally and she was proud of your positive achievements,” said Professor Murchan.
And she had another family in the people who loved her, adored her and helped her, he added.
Following the Requiem Mass, Evie Magnier-Stockwell was laid to rest at a private burial in Kilcrumper Old Cemetery in Fermoy.