Miriam is still active beyond her years, having just come back from her summer holidays a few days before her 100th birthday 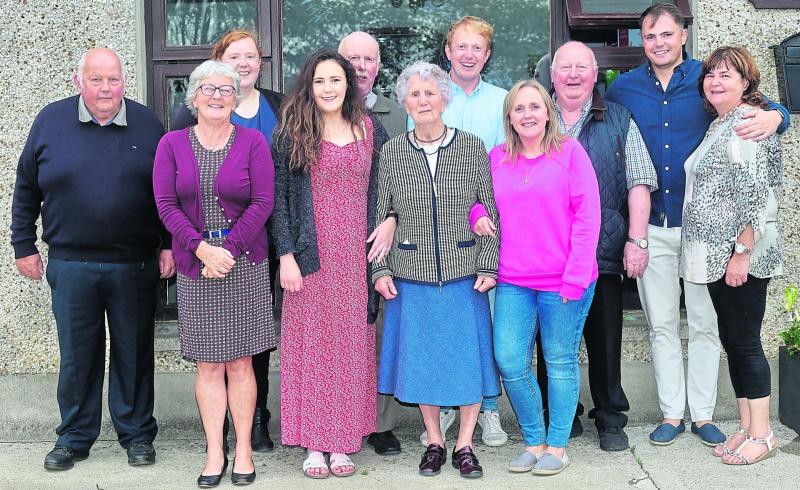 Above, Miriam Dudley, Dovea (centre) with her family on the occasion of her 100th birthday and below, Miriam with her grandson, Edward

Mrs Miriam Dudley of The Poplars, Dovea, Thurles, celebrated her landmark 100th birthday on Saturday, August 7 last.
Miriam was born in Graigue, Drom in 1921 to Richard & Jane Woods and was the youngest of 17 children.

Miriam was educated in St Mary’s National School, Templemore before attending Villiers School in Limerick for second-level, eventually becoming a teacher and going on to teach in Waterford, Dublin and Limerick, as a young adult.

She then married the late Edward (Ned) Dudley in 1949 and the newlywed couple moved to Dovea to begin farming there and went on to have 5 children, Henry, Richard, Trevor & Sandra and the late baby Edward.

The farm at Dovea is still going strong some 72 years later with Trevor and his family running a herd of pedigree British Friesian dairy cattle and Hereford beef cattle there presently.

Miriam is still active beyond her years, having just come back from her summer holidays a few days before her 100th birthday and still does her own shopping (she can be spotted in Templemore every Thursday morning!) with the fortnightly trip to the hair salon strictly adhered to, come rain, hail or shine.

A woman of great faith, Miriam also attends Church every week and dutifully set the Holy Communion table at her local Church in Kilfithmone on the morning after her 100th birthday party.

A self-professed ‘homebird’, Miriam is happiest when nestled in her favourite armchair by the fire in her kitchen and is always at the heart of the family’s activities in Dovea.