SEMRA called out to an incident in the Galtee Mountains Sunday, August 29 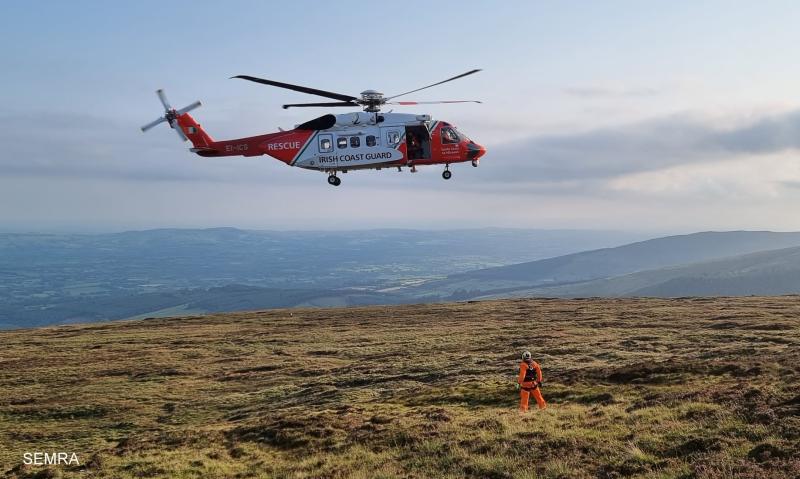 SEMRA responded to a callout in the Galtee Mountains on Sunday afternoon as call came in at 3.57pm that a male had fallen and suffered a lower leg injury in the Galtees.

The location of the casualty was confirmed as the south side of Galtee Mor 2km north of King’s Yard car park at spot height 600m. SEMRA’s first hill party arrive at Kings Yard at 4.35pm, started making way up the mountain at 4.44pm and were at the casualty side by 5.28pm.

As SEMRA members continued to respond, the first hill party assessed and treated the casualty and kept him comfortable. SEMRA team members carried essential equipment including stretcher and medical gear up to the casualty site.

Meanwhile Coastguard Rescue 117 was deployed from Waterford Airport and was on scene by 6.28pm.

Winchman and stretcher were lowered down from the helicopter and with the assistance of SEMRA the casualty was carefully packaged into the stretcher and carried to suitable flat ground by SEMRA members.

The casualty and winchman were lifted on board the hovering helicopter, with trained SEMRA members providing technical highline (rope) support to ensure a smooth and controlled lift. As R117 departed with the casualty, SEMRA escorted other members of the casualty’s group down off of the hill to King’s Yard.

After a team debrief all SEMRA members were off the hill by 8.06pm. Thanks to owners of King’s Yard for facilitating us during the operation