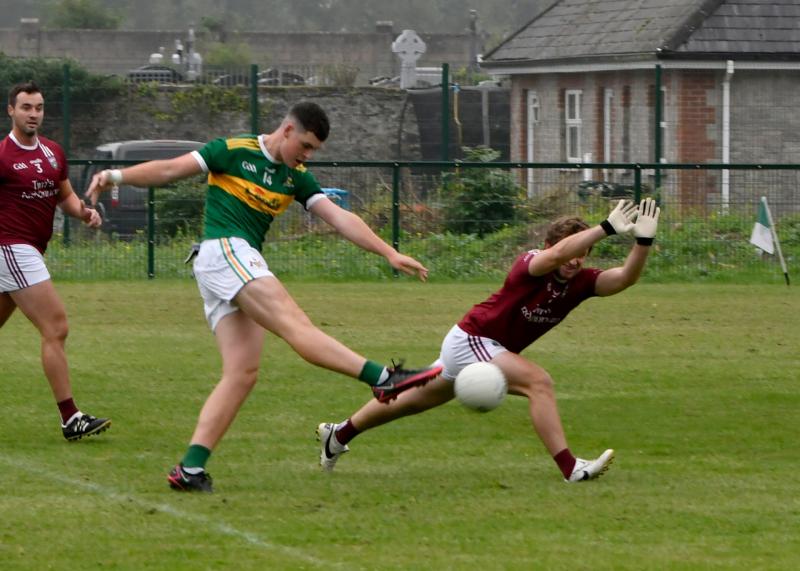 Esteemed club president, the late John McNamara, would have enjoyed the tributes paid to him in Cahir on Sunday morning when his beloved Clonmel Commercials opened their County SFC Group 3 campaign with a resounding nineteen points win over Ardfinnan.
Teams and supporters stood in silence before throw-in as a mark of respect to a man fondly remembered as ‘Mr Commercials’. He would have appreciated the gesture but even more so the performance put in by his green and gold clad players as they routed old foes Ardfinnan.
There was nothing John enjoyed more than the legendary, hard-fought battles between the town team and those from the ‘village’ but this Round 1 encounter didn’t live up to the excitement of games from the past.
The brilliant 3-4 from full forward Sean O’Connor was enough to surpass the Ardfinnan total on its own. Add in virtuosa displays from Kevin Fahey, Jason Lonergan and Conal Kennedy to make this the ideal start-off point for Commercials’ three county titles in a row bid.
Despite a blistering 1-1 from O’Connor in the first three minutes, Ardfinnan matched the champions stride for stride for most of the first half and were still well in touch, 2-4 to 1-4, five minutes before the break. O’Connor’s second goal of his hat-trick helped to push it out to 3-6 to 1-5 at half time.
But a seven point gap wasn’t insurmountable for an Ardfinnan side taking the game to the champions, with Conor O’Shaughnessy, Sean Nagle, Gavin Whelan and Gerry Cronin showing well for the men in maroon.
However they failed to maintain the intensity in the second half when they could only add two further points against 1-11 for Commercials who used their vast array of skills and free-flowing football to copper-fasten their credentials as title favourites again.
A whirlwind start set them on their way, Sean O’Connor pointing in the second minute and blasting past Michael Goonan in the Ardfinnan goal a minute later after fielding a free from Jack Kennedy. Colm O’Shaughnessy had Ardfinnan’s first point in the fourth minute but a Commercials stroll looked on the cards when Kevin Fahey hit back immediately with their second goal.
However Ardfinnan showed great resolve to drag themselves back into contention, first Michael Barlow pointing a long range free and then a great run from Sean Nagle set up Andrew Browne to palm the ball to the net past Michael O’Reilly.
Three points in a row from Jason Lonergan, Seamus Kennedy and Kevin Fahey pushed Clonmel Commercials further ahead but the Maroons stayed in touch with two converted frees from Michael Barlow. Sean O’Connor’s second goal in the 28th minute gave the town side more breathing space, again brilliantly fielding a high ball from Ciaran Cannon to shoot past Goonan.
In a second half of virtual one-way traffic, Commercials outscored their opponents five to one, through Lonergan, Michael Murphy, Padraic Looram and two from Jack Kennedy, to Ardfinnan’s reply from Darragh O’Leary, before the fourth goal put an end to any doubt about the final outcome, O’Connor cutting in from a tight angle to shoot low past Goonan.
Commercials outscored Ardfinnan five to one again in the final 20 minutes with the game long over as a contest before the final whistle.
Clonmel Commercials – Michael O’Reilly, Donal Lynch, Liam Ryan, Ciaran Cannon, Padraic Looram 0-1; Kevin Fahey 1-1; Jamie Peters., Conal Kennedy, Seamus Kennedy 0-2; Jack Kennedy 0-3, 0-1 free; Michael Quinlivan, Aldo Matassa, Jason Lonergan 0-4; Sean O’Connor 3-4, 0-1 free; Michael Murphy 0-1. Subs – Jamie Aherne for Cannon; Colman Kennedy 0-1 for Seamus Kennedy.
Ardfinnan – Michael Goonan John Condon, Jonathan Ryan, Michael O’Sullivan, Darragh O’Leary 0-1; Sean Nagle, Colm O’Shaughnessy 0-1; Gavin Whelan 0-1; Gerry Cronin, Michael Barlow 0-3 frees; Luke O’Brien, Billy Hewitt 0-1; Andrew Browne 1-0; Dylan Nugent, Jason Coffey. Subs – Robert Condon for John Condon, Shane Keating for Coffey, Aaron Lonergan, Aaron Lonergan for Andrew Browne
Referee – Seanie Peters (Aherlow).