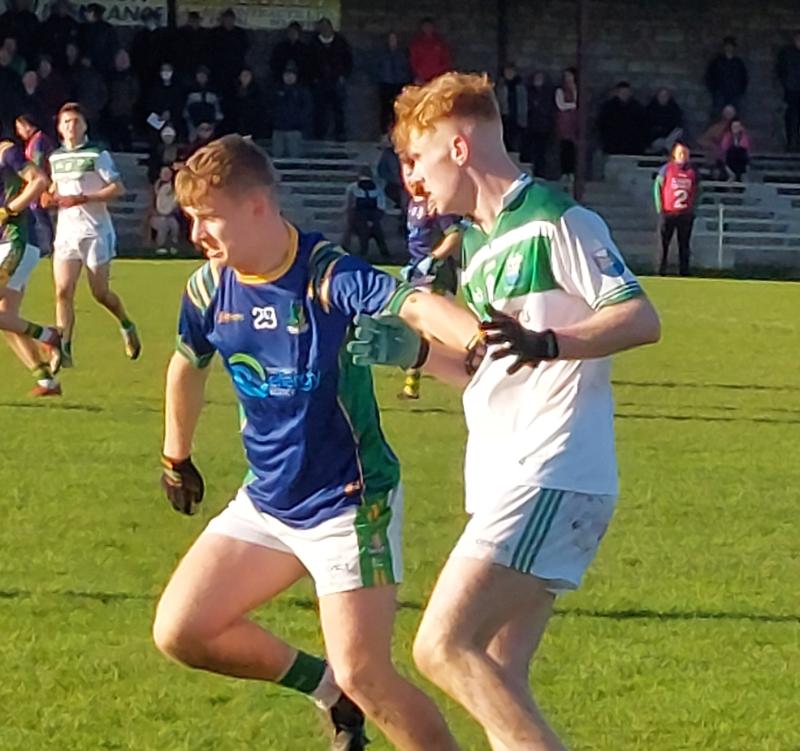 Cahir's Jake Kiely gets to grips with Shane Lowe of Moyne during today's relegation game.

A Michael O'Connor inspired Cahir produced a solid performance as they had plenty in reserve in victory over Moyne Templetuohy at a blustery and freezing Boherlahan this afternoon.

After winning the Intermediate hurling title last weekend, Moyne would have been eager to use the feel good factor around the club at the moment to build a performance that might keep them in the senior ranks, but they couldn't get it together on the day and made little use of the strong gale present in the first half.

Despite points from John Hassett and two beautiful scores from Conor Bowe, they trailed at the break with Michael O'Connor's fortuitous effort at a point in the 13th minute dropping into the net over the flailing hands of Odhran Lloyd in the Moyne goals, which gave Cahir a significant boost playing against the elements as they led 1-3 to 0-5 at half-time.

A good start to the second period from Moyne was a requirement but it went in the opposite direction as Cahir goaled within two minutes; big Kevin Grogan reaching highest under a dropping ball into the square to fist home and give his side a huge injection of belief playing with the breeze.

This proved to be a pivotal score as Moyne struggled to get any meaningful possession into their hands and Cahir made the most of the wind, with free taker Jack Buckley floating over some nice points, along with a lovely score from Stephen Grogan, Cahir had all the momentum.

Kevin Grogan ended the ties in terms of the outcome when he slotted his second goal in the 45th minute, with Michael O'Connor once again proving the architect in chief with a clever assist teeing up the full forward who finished first time from close range to wrap up Cahir's survival and inclusion in next year's senior championship.

A late red card for Cahir substitute James Walsh for a high challenge on Tossy Hamill put a disappointing gleen on the outcome for Cahir, but they won't be overly worried as they condemned Moyne to intermediate football for 2022.

Sarsfields and Loughmore must meet again after Tipperary's feast of hurling