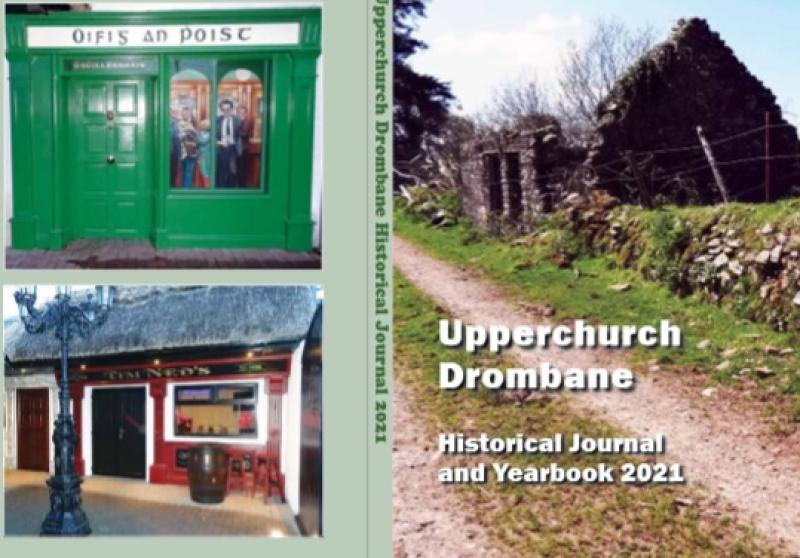 Running to 240 pages with  30 separate contributions and about 100 photos and illustrations, it is not ot be missed.

The latest edition of this ever popular publication surpasses in size and scope all previous Journals from the famous upland area which has always been a stronghold of tradition and folklore.

Running to 240 pages, about 30 separate contributions and about 100 photos and illustrations, there is something to capture everyone’s interest, even those with a tenuous connection to the parish.

The recent epidemic seems to have helped some people to at last get down to writing their various memoirs. Tomás Hayes was born and reared beside the childhood home of the great Tom Semple in the Glebe before venturing farther afield in later years. He recreates the local atmosphere of the 1960s in the homely neighbourhood and tells of his boyish interests and of schoolboy pranks which took unexpected turns. Con Ryan tells of time spent in the 1950s being what would nowadays be called a farm apprentice but which was then plain hard work and he was one of the lucky ones. Andy Byrne continues his life story, mostly detailing his time as a barman in England and Ireland and the people and events he encountered.

Other memoirs include John Brett’s days as a naive trainee milkman in Dublin, an occupation not as simple and straightforward as might first appear. A former athlete brings back memories of a long bus trip to a cross country race in 1971, with the shenanigans of the late night return journey more energy sapping than the actual race. Michael O’Dwyer continues on the athletics theme with details of the careers of Phil Kinane of Gurtnahalla and Mickey O’Dwyer of Lognasceach.
Fr. Paddy Dunne from Drombane gave his life’s work to the Church in Australia, including active service as a chaplain to the Australian Army in WW2 and his nephew, Fr. Tom Dunne, Boherlahan, recounts his uncle’s career. Details of other parishioners who gave their lives to Christ are provided by Joan Ryan.

“It was depression in Éire”. These five words pithily summarise the early years of the Irish state and kick off the memories of the late Jerry Darmody of Moher. His father passed away when Jerry was fifteen leaving his mother and eight children, of whom Jerry was the eldest, to do as best they could on a mountain farm. A sobering but inspiring read.

We all spent long periods of our life going to school every day but it probably never entered our minds to question why the school buildings were designed as they were. Gerry Britt bought the old 1950s St. Patrick’s N.S. in Upperchurch some years ago and gives an interesting account of the thinking behind its design as well as rekindling memories of what school was like for pupils and teachers. On a similar theme Eugene Shortt deals with the design and building of the Erasmus Smith school in Drombane, now Ryan Patsy’s, in 1812, before cost overruns came into fashion.

The Erasmus Smith Trust held huge amounts of land in Co. Tipperary, including the seventeen hundred acres of Drombane townland which had over eight hundred inhabitants. A report to the Trust governors in 1836 describes the terrible living conditions, stating that only two or three families aspired to “the least appearance of decency” while the rest would be likely to receive benefit from “superior mental aid”.

The same period had massive emigration from the local area. Kaye Schofield from Sydney is a great granddaughter of one such emigrant, Julia Bourke from Rosmult. After years of searching, Kaye, with some local help, finally tracked down Julia’s origins beside Templebeg graveyard. Her article details Julia’s life in Ireland, the process of emigration and her subsequent activities in Australia ranging from rearing ten children to living in a railway camp to shebeen keeping. Hardy ladies, these Rosmult women.

The position and remuneration of farm workers a hundred years ago is dealt with by Bob McCormack whose family account books provided a valuable resource. Other account books from the locality show items, many now forgotten about but then in everyday use, and what they cost. The Earley stained glass studios in Dublin rivalled the Harry Clarke studios in the first half of the 20th century and Michael Earley of this family describes the background to the magnificent windows behind the altar in the Sacred Heart Church.

As we move into the centenary of the Civil War uncomfortable memories are likely to be revived. Tom Quinlan has written the first part of an account of local casualties in the pro-Treaty National Army with more to come next year. Like many other things, we take the appearance and outline of our countryside for granted without ever questioning the shape and position of landscape features. Frankie Shortt explores this subject using the 1859 Geological Survey as a basis but with some later updates. Other items include what made the news 50 years ago, a couple of poems, photos galore and a look back at the first Róisín an Chnoic contest in 1988.

In the yearbook section Fr. Tony Ryan, PP, reflects on the changes brought about by the pandemic. There is also a list of births, weddings and deaths and a record of the main local happenings since the last issue. The book will be available from the usual outlets, price €10. It can only be ordered by mail from Bookworm, Thurles.