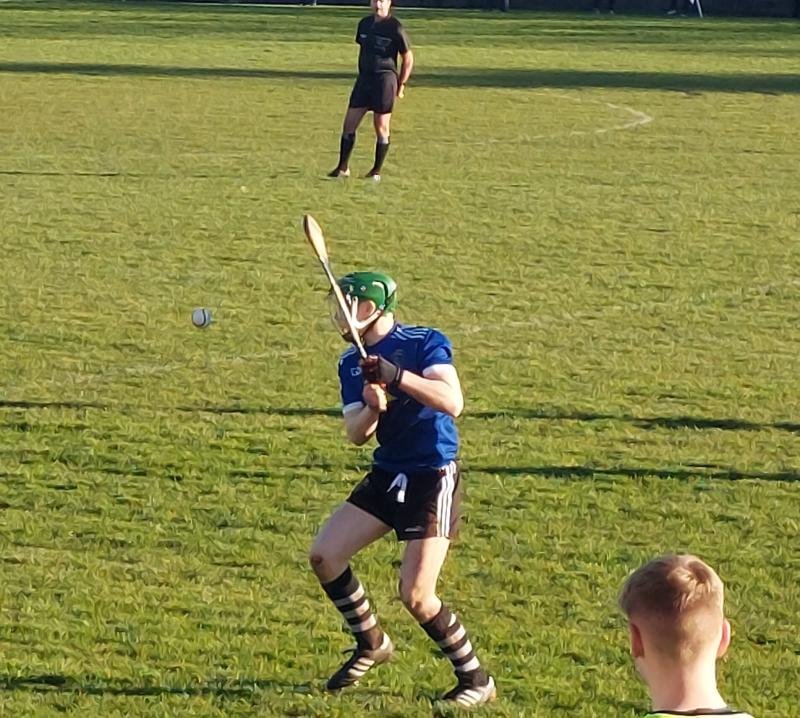 Nenagh CBS free taker Darragh McCarthy slotting over one of his 0-13 frees in Bansha today.

Nenagh CBS were sent crashing out of this year’s Harty Cup after losing a tense and energetic battle with De La Salle College in Bansha this afternoon.

A Paddy Fitzgerald inspired De La Salle were full value for the win, as Nenagh could never really muster enough of a threat on their opponents goal to push on when they were in the game during the second half.

Unlike Nenagh, De La Salle were far more threatening and three second half goals proved decisive in a period where Nenagh had gained the upper hand but just couldn’t make the most of their purple patch to take the game by the scruff of the neck.

De La Salle were the slicker team on the ball and Nenagh seemed hell bent on taking the ball through the hands come out of the defence rather than letting it in early, which led to a lot of mistakes as their physical bigger opposition turned the ball over on numerous occasions, which sucked the life out of the north Tipp school; particularly in the second half.

The conditions were perfect for the teams in the opening half and it was Nenagh who got off the the perfect start with a Darragh McCarthy free inside the opening minute.

De La Salle quickly got into their groove though, with Paddy Fitzgerald responding with a free of his own a minute later, before pointing two beautiful efforts from play in the next five minutes, as De La Salle got on top early.

Indeed, one of the aforementioned Fitzgerald points from play came due to a poor puckout from Dermot McTiernan in the Nenagh goal, and another in the 7th minute led to Fitzgerald playing Sam Pender through on goal, and despite some good last ditch hooking from the Nenagh defence, they couldn’t clear the ball and Pender bundled the ball to the net to raise a green flag.

Nenagh were really living off scraps at this point and struggling to gain possession, but Sean Kenneally was beginning to get hold of the ball and drew a few frees for the laser accurate Darragh McCarthy to point, although they were both quickly followed by a free from Paddy Fitzgerald and a beauty of a sideline beside the dugout.

But Eoin Grace soon showed he is just as capable with a ground ball, slotting over a lovely sideline under the stand just before the water break, with Nenagh trailing by 1-5 to 0-4.

Tipperary senior athletics championships return to Nenagh on Sunday next

Nenagh came a bit more into the game in the second quarter, but they couldn’t make it count on the scoreboard, and some poor handling errors and an unwillingness to get the ball into the full forward line seen them run into a lot of traffic as further scores from Darragh McCarthy for Nenagh, along with Paddy Fitzgerald, Sam Pender, and Jack Twomey seen De La Salle take a four point lead into the half time interval.

Paddy Fitzgerald extended the De La Salle lead within the first two minutes of the resumption with a nicely struck free, but Nenagh came out a team possessed in the second half with Sean Kenneally storming into the game, winning several frees for Darragh McCarthy to dispatch along with two fantastic points from play, the first where he withstood two big shoulders on the sideline before rifling over from a big distance; Nenagh now only trailing by one point by the 40th minute.

But young Paddy Fitzgerald was really standing up for the Waterford school and when he found himself one on one with Jack McGrath in the 41st minute, he skinned the defender with a dummy handpass before stitching the ball high the Nenagh goal.

That was a big sucker punch for Nenagh but they stayed going, with Kenneally a real target from puckouts, with two Darragh McCarthy frees taking the edge off before Micheal Ryan galloped up field to score a beauty in the 44th minute to bring it back to a point game.

But that’s as close as they would come, and a big factor seemed to be after Nenagh CBS manager Donach O’Donnell got into hot water with referee John O’Halloran, who eventually had to send him off the field for his level of descent.

This is where Ballygunner took over and finished the game, with Conor Tobin pouncing on a mistake from a missed rise from Jack O’Callaghan to run through a finish to the net and extend the lead to after 53 minutes.

Nenagh emptied the bench but in their pursuit of scores they completely lost their shape as Luke Horgan latched onto a looping ball inside the Nenagh 22 to score yet another goal to all but end Nenagh’s hopes.

There was still time for more to go wrong for Nenagh though, as their discipline completely deserted them in the final minutes, with substitute Paul Seymour capping off a miserable week for him personally, receiving a straight red card for an off the ball incident with Paraic Murphy.

De La Salle were certainly value for their win, but credit to Nenagh who battled hard throughout and just didn’t get the luck they needed as the exit the Harty Cup for this year.