Padraic Maher says he's raring to go ahead of 2022 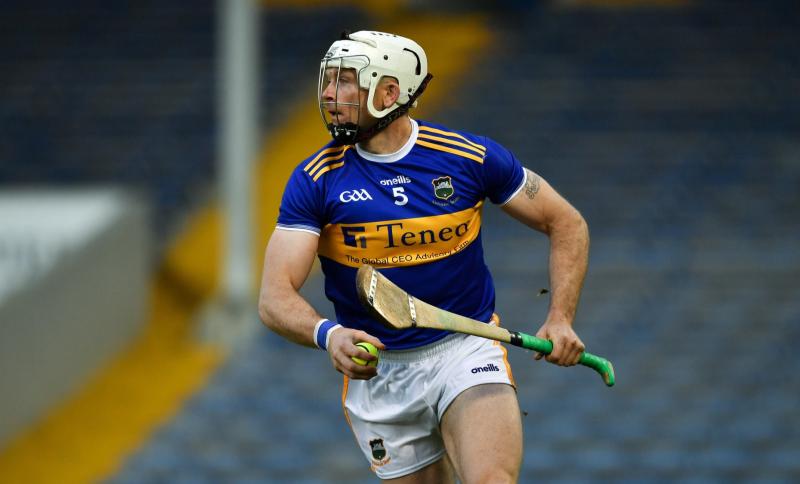 Tipperary hurler Padraic Maher is eager to get going for the Premier in 2022, after an immensely "enjoyable" year on the field last year.

Speaking at the launch of the FBD Insurance partnership announcement with Semple Stadium, Maher said that the older guard are still ready for the battle and he referenced how good he felt on the pitch throughout 2021.

"Speaking for myself anyway, my body felt great last year and I really enjoyed it," Maher reflected.

"I loved club the hurling and felt great up until the final few weeks where I picked up a few knocks, which set me back a bit. But other than that, the body feels good and if I can get up to 100 percent physically, I still feel I can do a job for Tipperary. So I just need to sort out the few niggles and hopefully get back to 100 percent for Colm Bonnar and co.

Colm Bonnar has taken over at the helm from Liam Sheedy and has had limited contact with players so far, particularly Maher who has yet to re-join the panel due to injury, but the Thurles Sarsfields man has said that the vibes in the camp thus far have been positive.

"To be honest, I’ve only spoken to him a couple of times because I haven’t rejoined the panel yet because I’ve a few injury issues to sort out after the club campaign.

"But in fairness to him, he told me to go and get myself right before I come back in. And that’s fair enough because I don’t want to be going back in there and half-arsing it.

"I want to be able to go back in and be at 100 percent. From what I’m hearing from the lads so far, they seem to be pretty happy. The training and the gym work has been very good. So the general consensus is that everything is going well."

A frustrating injury has hampered Maher since the county quarter-final which will delay his return into a Tipperary jersey, but he feels that he needs to be at his peak condition with new management in place, and is expecting a battle for places amongst the players this year.

"I’d be very surprised if I’m back for the early stages of the league," he revealed.

"Even if I do get myself right, I won’t have been training like the rest of the group, so I don’t think I’ll be available for selection for the first two rounds anyway. You can’t go in straight away into a match, you have to build back that bit of fitness and get a bit of hurling in.

"I’ll be hoping to get a few games in before the end of the league. It’s a whole new management team so I want to show that I’m still good enough to be there and that I still have something to offer to the group.

"And you don’t want to be going into championship hurling cold, so I’ll definitely be looking to have a few games under the belt anyway.

"I’ve an ankle injury which will probably require surgery down the line, but there’s no sense in getting it now; I’ll wait until I’ve the boots hanging up in the wardrobe before I get that done.

"Just a few small issues other than that. I’m lucky that I’ve been blessed in regards to injuries so they’re just small things I’ve to sort out before I go back into training.

I hurt my ankle against Clonoulty in the county quarter-final and I had had an issue with that ankle going into the game and I gave it a good going over playing the match.

"I didn’t really train after that until the end of the club run. I was literally just doing enough to get myself right to play the games, which is frustrating because I was enjoying the hurling and felt great. But that injury kind of put a dampener on the rest of the year because I just couldn’t train properly."

This will be Maher's fourteenth year on the Tipperary senior panel and he says their is added motivation beyond winning trophies for his continuing effort in the blue and gold, and that's by helping the clutch of young talent take the next step into the senior ranks.

"There is definitely a part of me that wants to help bring through the younger crew.

"There’s some great young hurlers in Tipperary and you’d be hoping to see them progress on now with the senior team, and see them turn it into their team. And hopefully, the likes of myself can help in some way around the group.

"But I feel there’s still plenty I can contribute and I feel if I can get myself right I can still offer something to the team. Look, at the end of the day you don’t want your career to petre out and I want to play my part on the field," Maher added.

While there has been a sea of changes to personnel both on and off the pitch, Maher is delighted that there will be continuity with Liam Sheedy's reign, as Bonnar has invited Tommy Dunne back into the set up and this is a very positive move, according to the defender.

"It’s very important because nearly everything else is new," Maher said in relation to Dunne.

"Strength and conditioning coaches, doctors, physios, everything has changed in Tipperary so there’s no harm having some continuity from the old set up.

"Tommy has been a great coach for us over the years, and he's just so dedicated and he’ll be able to guide Colm into the job and bring learnings from being in Liam’s set up. So I’m thrilled that he’s staying on with the group.

A new year always brings around the optimism of the potential glory of the county team in Tipperary, and in reflection on 2021, Maher and the rest of the panel still have regrets, particularly over the second half demolition they received at the hands of Limerick in the Munster final.

"It was a good performance from them to be fair.

"They’re a wonderful team, but it was so disappointing from our side of things, that we had so many experienced lads on the field at the time, and we didn’t try and slow the game down or do something to throw a spanner in the works because they were on top of us straight away.

"There’s definitely regrets for us because I felt we were dictating the game in the first half, but they are a fantastic team and they showed that in the games afterward. But hopefully we can learn from that game in the future," he mentioned.

Limerick have undoubtedly become the standard bearers of intercounty hurling in the past few years, and despite having played against what is regarded as one of the all time great teams in Kilkenny in his formative hurling years, Maher doesn't recognise beating the Treaty as his soul motivation.

"I can’t say that I’m staying in the game just to beat Limerick.

"At the moment I think we’re back in the pack as the rest of the teams. I think Limerick are still ahead of everyone else because they’ve been so consistent over the last few years.

"My main motivation is to try and get back to the top table, and if that means having to beat Limerick along the way, then so be it. We haven’t had the upper hand on them in the last few years in fairness, but I don’t think we’re as far away (from them) as people think. A

"Although, at the same time, we still have a lot of ground to make up," he was quick to add.

There has been an eagerness amongst Tipperary supporters in the last number of years to introduce a freshness to the team, mainly from the crop of underage talent that has won U20 and U21 All-Ireland's in the recent past, and Maher is expecting them to come good this year.

"You do need a whole panel of players for the round robin format alright," Maher said in relation to the Munster round-robin re-introduction.

"You’d be hoping that the younger lads will step up because you’ll definitely need rotation in the panel over the course of the games.

"Back in 2019, we had a lot of rotation at times through the games and it was seamless enough for everyone, so you’d be hoping that lads will get up to the pitch of things quick enough and we can get a win early on.

"Momentum plays a part in it too, so if we can get two wins heading into the break, we’ll be buzzing and momentum will be with us and that would be a big help heading into the rest of the championship," he finished.