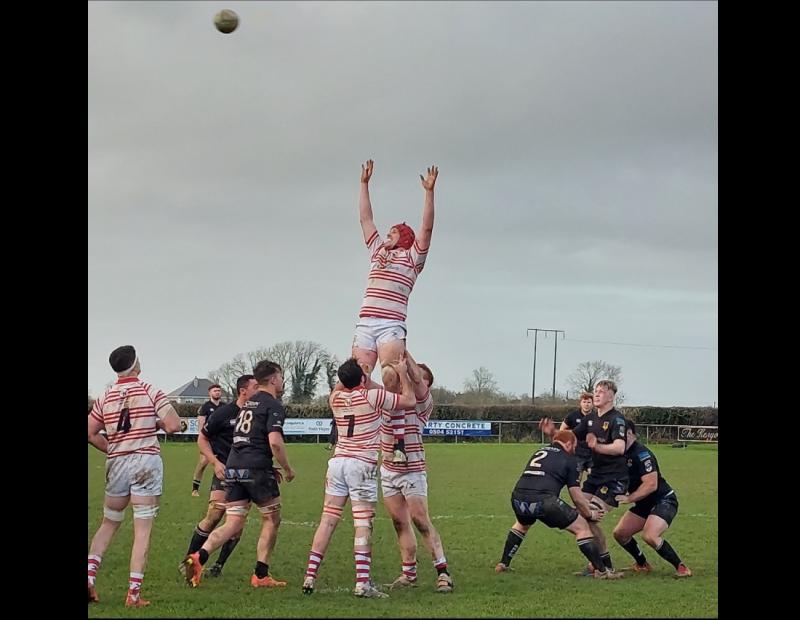 Nenagh lock Kevin O'Flaherty rises high to claim a line-out during his sides win over Ballymena.

Nenagh Ormond produced one of their best displays in recent memory with a complete demolishing job of high flying northerners Ballymena in New Ormond Park earlier this afternoon.

The home supporters present would have had to pinch themselves looking at the half-time score, as Nenagh led 28-0 with four tries securing a bonus point in the opening 40, as they completely overrun and outplayed the visitors.

Tries from John Hayes, Peter Coman, Davy Gleeson, and Johnny Hayes had Nenagh in dreamland as they made a good team in Ballymena - who started the day second in the table - look a pale impression of the team seen this season to date; Nenagh proving more than full value for the win.

Indeed, Nenagh started the game at break neck pace and had crossed the whitewash within a minute, with Fionn McGibney breaking the line with a returning run before offloading to John Hayes on his shoulder to get Nenagh off to a flying start - McGibney adding the extras.

Since the return to action after the Christmas break, Nenagh have improved drastically and had the look of a team with their tails up, with that try giving them extra purpose in early stages, and this led to a second try just two minutes later, with Willie Coffey turning provider this time; breaking the porous Ballymena line before his undercooked pass bounced gracefully into the hands of Davy Gleeson on the right wing to send the winger over in the corner. Nenagh in control early at 14-0.

There was a decent breeze favouring Nenagh in the first half, but they were completely dominating all aspects of the contest and were deservedly further ahead by the 18th minute, this score coming from a bit of quick thinking from John O'Flaherty who picked the ball expertly from the base of a ruck to run for the line, and despite being held short of the line, it only took a few phases for Peter Coman to be sent over on the left wing to send Nenagh supporters into delirium.

An excellent McGibney conversion gave them a commanding 21-0 lead, and they continued their domination to half-time with Johnny Hayes scoring their fourth try from close range a minute before the break to secure the bonus point, and in essence, the win overall.

Ballymena played like a team shell-shocked throughout and despite the half-time crisis meeting, they were not able to get any concerted play together at any stage, as Fionn McGibney made it a five-score game with a close range penalty nine minutes into the second half.

The remainder was a case of how much damage Nenagh could inflict further on their opponents, with Evan Murphy adding another five-pointer in the 62nd and despite a consolation try from Adam Lamont in the 70th minute, it was Nenagh who finished the game's scoring late on with John O'Flaherty going over to beef out the final score for the home team.

The company has located its headquarters in the Chamber Enterprise Centre in Thurles employing 23 people but with plans to extend that to over 200 by 2030.