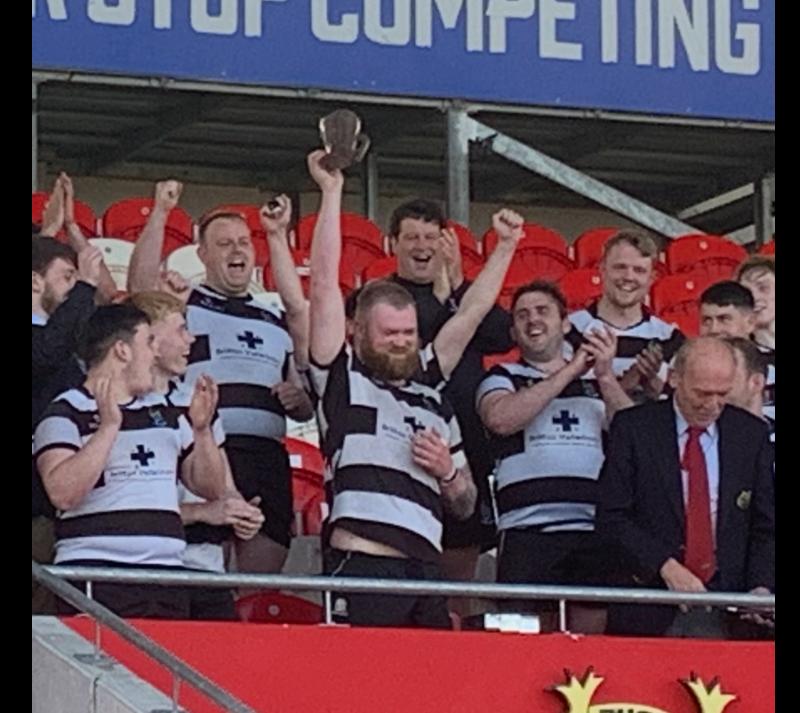 Thurles Rugby football club made history last Friday evening when the first fifteen won the Munster Junior League Section C (Division 2) by virtue of a comprehensive victory over a disappointing Fermoy side.

Even with Thurles resting some players as the final of the Munster junior plate was to be held two days later they were still too strong for Fermoy.

After a few minutes of getting used to players in different positions Sonny Dwyer opened the show with an impressive break through the pack and over the line for the first try after 15 minutes Seamie Houlihan tapped over the conversion, three minutes later second row Colin Nolan powered over for another which Houlihan converted, Matthew Kelly on the wing got in for another and Dylan Shaughnessy guaranteed the extra points with a try just before halftime. Seamus Houlihan rounded off a good first half at out half by converting both.

The second half was more of the same with subs used to rest players for Sunday's game but the system remained unchanged with Rob O’Donovan showing the home supporters that last week’s try was no fluke as he powered over after another run from inside his own half.

Cathal Hayes got in for another try and Paddy McGrath finished off the nights scoring with a fine run to the corner,
There were good performances all round Luke Fogarty did well in the centre. Seamie Houlihan gave a good account of himself at out half, Nathan is still talking about his pass to Paddy McGrath to cut open the defence, Conor Moloney was very strong at number eight.

This is the first league title that Thurles has won since the North Munster League win of 1983.
It was a very proud Captain Luke Kelly collected the Liam Fitzgerald Cup for winning the league undefeated 4 points clear at the top.

Thurles travelled to Musgrave Park in Cork City on Sunday afternoon to claim the Munster Junior Plate over Cork opponents Cobh Pirates in the final of this year’s competition.

Cobh, knowing that Thurles had a league game on Friday night, went on the offensive from the start and were rewarded with a penalty after 2 minutes which they converted. Thurles had to absorb serious pressure as Cobh used the windy conditions to keep in the Thurles half and were rewarded in the 13th and 23rd minute with very kickable penalties but were shockingly missed.

This would have put doubts in any team but instead Thurles reversed the flow of the game, started to keep the ball in tight and were rewarded with a penalty that the wind carried away from the posts.

Thurles lost prop Gerry McCormack with a hamstring injury midway through the first half but was well replaced by Jack Kavanagh. Thurles kept up the pressure and in the 39th minute deep in the Cobh half gave away a penalty, from the resultant lineout Thurles stole the ball and worked the ball up the wing for Owen Byrne to score to go ahead 5-3.

This looked good going into halftime but disaster struck when the defenders were sucked in and the Cobh winger got in for a try on the stroke of half time for the half time score to be 5-8.

Thurles needed to change tactics and introduced Sonny Dwyer into the back line, upping the intensity.
Rob O'Donovan got 10 minutes in the bin for a high tackle and used the ten minutes rest, while the rest of the Thurles players drove on and won a penalty which Paddy McGrath slotted over .

Captain Luke Kelly finished off a fine break by Sam Quinlan to score beside the post, Paddy McGrath converted, and he stretched the lead further with penalty after the pack and especially the front row of John Shaw, Shane Nugent and jack Kavanagh drove the Pirates pack back off their own scrum turned over the ball and won the penalty.

From the kick off Thurles broke up the centre with Sonny Dwyer raced up the centre of the field, drawing in some defenders before offloading to Cathal Hayes who scurried up the wing to draw the last defender for Eoghan O’Dwyer to score.

Conor Moloney and Matthew Kelly came on and added more pep to the team. Thurles were well on top now, Eoghan got his normal 10 minutes in the bin that he gets on visits to Musgrave Park with two minutes to go, and the final try came from another Sonny Dwyer break up the middle again drew the defenders offloaded to Ciarán Ryan who got near the line and passed to Luke Kelly to score again beside the post. Paddy McGrath added the conversion to leave the final score 30-8.