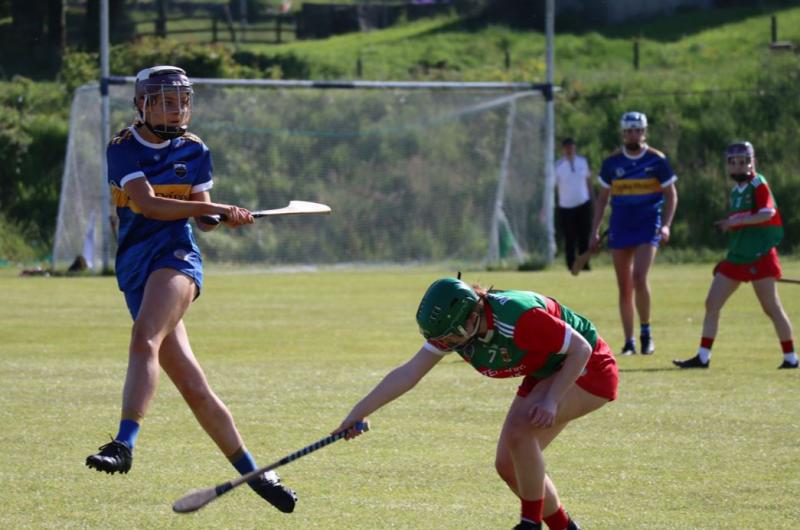 Tipperary made the long journey to Tooreen in Mayo to take on the home side in Round 2 of the Junior Camogie Championship.

After the opening round defeat to Cavan a win was a must and despite little between the sides in the opening exchanges, Tipperary got a firm grip on the game after the restart, confining Mayo to a single point while scoring eight of their own to run out as winners.

It was point for point for much of the first half with the Mayo forwards keeping the Tipperary rearguard very busy with both Saoirse Delaney and Fionnuala McLaughlin looking to take on their markers on every opportunity.

Manager Ray Delaney opted to start Grace Moloney at full forward and this paid dividends in the first half with Grace impressing with 0-3 points.

Alison O’Mahony got her first start of the year and she also impressed, offering great pace and energy up front and finishing with two points of her own. She was also unlucky not to have scored a goal but the Mayo keeper pulled off a fantastic save.

Sinead Meagher was also proving fruitful at wing forward and acted as a real target woman for Ciara Holohan’s puckouts. Approaching half time scores from Aoife McLoughney and Grace Moloney gave Tipperary a four point lead at the break at 0-10 to 0-6.

In very warm conditions both sides worked extremely hard. For Tipperary Ciara McKeogh really stepped up a gear in the second half and gave a great display.

The confidence started to spread throughout the team and good play by Claire Stakelum and Ciara Cummins helped Tipp to extend their lead with Aoife Mcloughney providing the finishing touches.

Aoife was a constant threat to the Mayo defence and she finished with a noteworthy tally of eight points from play and placed balls. At the opposite end Rachel Maher was excellent at centre back while the full back line of Niamh McCormack, Ashling Sheedy and Maebh Eillie Ryan was solid throughout.

With still plenty to work on it was a very encouraging performance for the Tipperary girls ahead of their meeting with Clare in the County Camogie Grounds this Saturday at 5pm.

This is another huge game for the team as they look to grab one of the top two spots in the group.