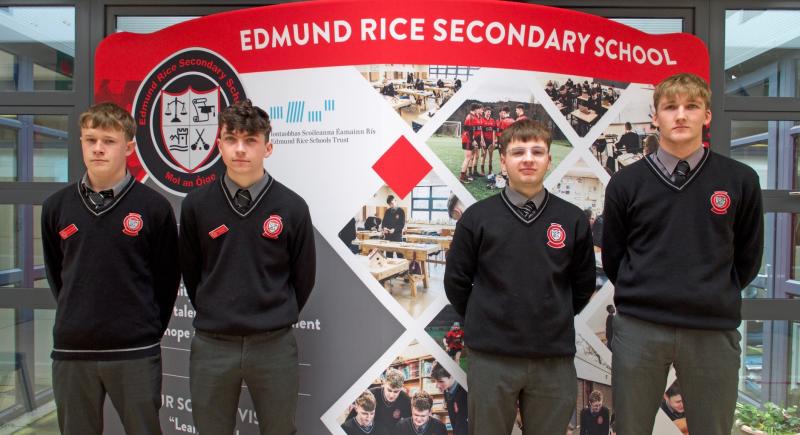 Installing a coffee machine and drinking water fountains, choosing a new PE uniform and fundraising for worthy causes are some of the positive contributions Edmund Rice Secondary School’s Student Council has made at the school.

The Council’s members are democratically elected by students. It includes 15 members from junior cycle classes and nine students from senior years.

Outgoing Head Boy Ian Holden and his fellow 6th Year representatives are now handing over the reigns to Student Council members who have completed 5th Year.

Aidan Wells will take over at the helm as Head Boy in September.

In the wake of the Russian invasion of Ukraine, the Student Council co-ordinated a donations appeal for clothing and other humanitarian aid for war refugees in the school over a period of a week.

The huge outpouring of donations from students nearly filled one of the school’s dressing rooms.

Fellow outgoing 6th Year Student Council member Ciaran Phelan said they raised a huge amount of donations for the Ukraine refugees in a very short space of time. He pointed out that the school also ran a Stand with Ukraine Day in March.

Ian highlighted that the Student Council also spearheaded the installation of a coffee machine and water fountains in the school to encourage students to use reusable water bottles.

And the Council played a key role in selecting the school’s new black and red PE uniform, which was shown to incoming first years at their induction day before Easter.

Future projects the Student Council is considering is a proposal from a student to brighten up the school through art projects such as painting the oil tank, turning old tyres into flower pots and decorating the PE hall with famous quotes from sports stars.

Thomas Ryan, a Student Council member who has just finished 5th Year, said the Council is also hoping to build connections in the next academic year with Edmund Rice schools councils in Africa, Australia and America to find out how they run their schools.

Meanwhile Ian, who starts his Leaving Cert exams this week, has enjoyed his term as Head Boy.

“It was great. I learned a lot and I got a lot of new experiences from it,” he said. The Head Boy is chosen annually through a vote of students and teachers. “If I can do as much as Ian, I will be happy enough,” said incoming Head Boy Aidan Wells.