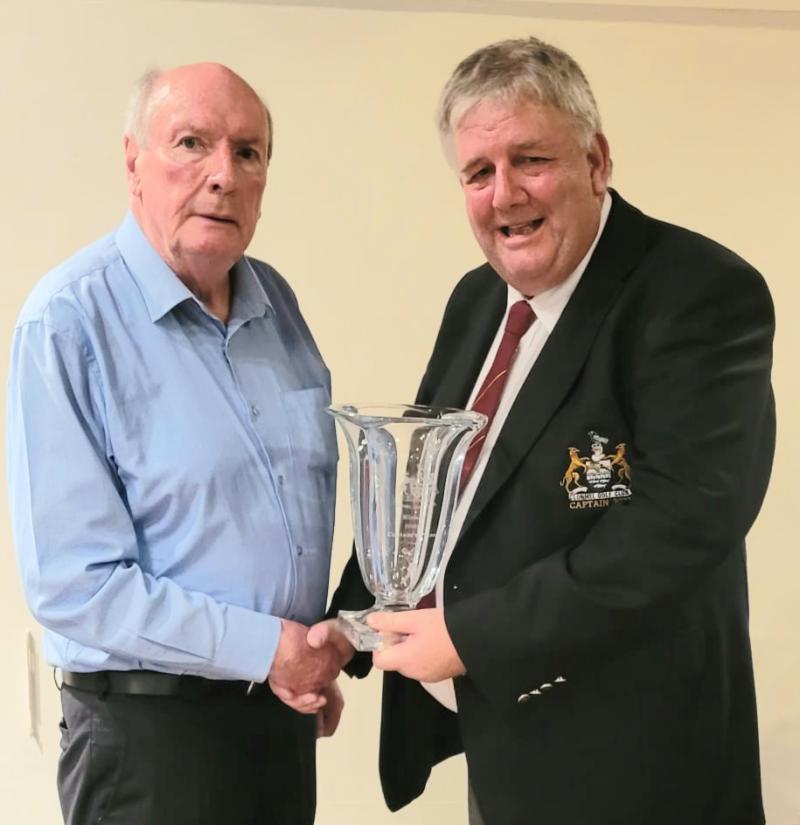 Paddy Phelan, winner of the Captain's Prize at Clonmel Golf Club on Saturday last with a magnificent 60 nett, accepts the winner's prize from the Men's Captain, Ned Brophy.

Clonmel Golf Club Captain’s Prize 2022
The pinnacle contest of every golfer and every golfing calendar has to be the Captain’s Prize, and when the mid-July sun is blazing in the sky it doesn’t get any better with the golf course itself in the shape of its life. On Saturday last, for Ned Brophy’s competition, 180 contestants took part with the first ball in the air at 6 am and the last man off the tee at 2.50pm. A great day’s competition was all wrapped up at 7.30 pm, cards checked and winners notified.
Patrick Phelan Senior (35) with a nett score of 60 was kingpin on the day.
Runner up spot went to George Mitchell (30) with a fine 64 nett which would win nine out of 10 captain prizes but unfortunately for George it was Paddy’s Day this year on July 9.
Best gross golfer on the day was James Cleary (1) had a sub-par score of 70 super shooting. Hotter than the day itself!
Third place went to Billy Hewitt (7) had 65 nett, which arguably on another day could also be the winning score.
Fourth and Fifth places went to Kevin O’Donnell (19) and Barry McCord (15) had the best two 66’s of the which there were many 66 netts. Never before did so many 66’s, 67’s, 68’s 69’s not feature on “Captain’s Day”. Oon the first quick check at 2.30pm Saturday afternoon we had more or less eliminated 69’s and 70’s on the first count.
Past Captain’s Prize went to the go-to man in the club Mr. Donagh Dougan (18) with a 68 nett.
Top Senior’s Prize went to Paddy Fitzgerald (14) with a 68 nett.
Best Front and Back nine holes went to Liam Maunsell (23) and John Butler (22) both shooting 31 nett.
Prize giving kicked off at 9.30 sharp.
Club president Shay Bannon heaped plenty of praise on the course staff, catering staff and all behind the scenes to make these days really special.
He also thanked Ned for his great work as ‘Captain’ of men’s committee. And congratulated all the competitors and of course the very worthy winners.
A great night was had by all...!