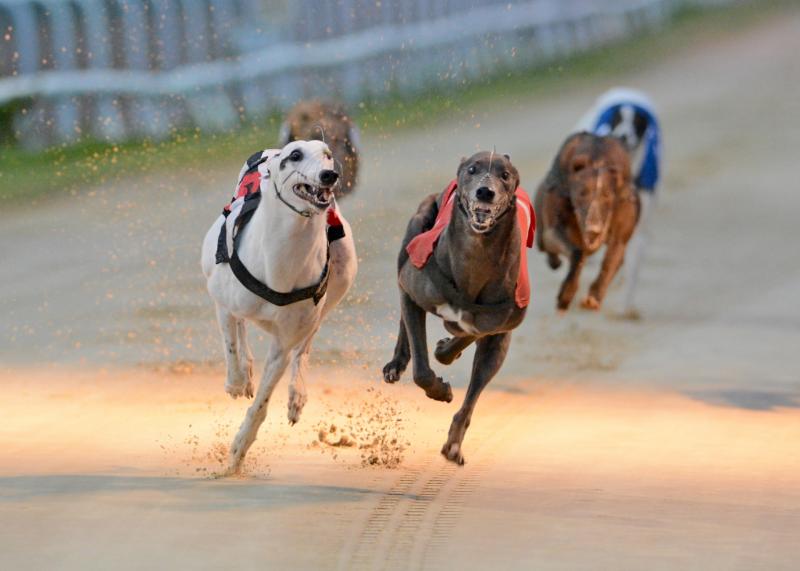 Dream slides to top spot in Tipperary Cup at Thurles

Stepping up for her first Thurles experience in the opening round of the 2022 Centenary Agri Tipperary Cup, Willie Joe Murphy’s Bobsleigh Dream (Droopys Sydney-Bobsleigh Jet) set the standard within a competitive session of quarterfinal heats in the Premier venue’s feature event of the season on Saturday.

Third to kennel companion Cushie Concorde a fortnight earlier, the Pat Buckley powerhouse resumed winning ways this time and once finding her best break from trap 3, the strong runner was always going to be difficult to contain.

Immediately edging to the lead, the February 2020 whelp repelled Group Ranger for the first bend lead before extending to a four-length advantage at the second bend as Irelands Own advanced to pursue the leader approaching the back straight. With the latter impressing at the halfway point, the lead was halved to the closing bends but never for catching, Bobsleigh Dream registered a cosy three length success over Irelands Own in 29.06 (-20), with Group Ranger only a further head back in third.

Following his pleasing opening round effort when second to Seomra Nate, the quarterfinal heats commenced with a popular victory for William O’Connor’s track regular Tour Valley Syd (Droopys Sydney-Yahoo Amelia) who posted the next best time of the round in Heat 1.

The lightly raced April 2020 whelp is strong at the trip and finding a smart break from trap 5 on Saturday, was immediately contesting the lead on the outside of Private Jet within a tightly packed field throughout the early stages. A narrow advantage approaching the corner quickly became a decisive lead however, as the O’Connor winner forcefully swept into the turns, effectively settling the race when extending clear to the backstraight.

In behind, Private Jet held second as Rockybay Rusty once again caught the eye to overhaul that rival beyond halfway but always retaining ample resolve out front, Tour Valley Syd posted 29.17 (-20) with a length and a half to spare over the strong staying Rockybay Rusty, with Private Jet a further six lengths back in third.

Following a dominant opening round win, Patrick O’Connell’s Seomra Nate (Definate Opinion-Ballymac Razzler) was subjected to a sterner test in Saturday’s Heat 3 of the Tipperary Cup but nonetheless retained his unbeaten competition tag in a game performance.

From trap 4, the Chris Houlihan charge was just headed at trap rise by Russmur Pat to his inside and racing almost as one while tackling the opening bends, the latter would assert to a two-length lead at the top of backstraight when briefly forcing the winner to check.

Impressive on the run to the closing bends, Seomra Nate advanced to join the pacesetter on the inside and crucially retaining the inside line to the home-straight, repelled the persistent challenge of a most game Russmur Pat by a half-length. In behind, Berties Cuddles stayed stoutly when one and a half lengths further back in 29.31 (-20).

Having returned from a long absence to claim victory in the opening round, the concluding quarterfinal saw Ray Patterson’s Skywalker Cilla (Laughil Blake-Droopys Zero) confirm her liking for Thurles when registering back-to-back heat wins.

A Champion Bitch Stake winner at Thurles in 2021, there was no hint of any bounce factor following a nine-month sabbatical for the Michael O’Donovan star despite bumped when reaching the opening bend following her mid-division break from trap 4. Recovering her stride while advancing past rivals on the approach to the back straight, the O’Donovan darling set out in pursuit of leader Bartlemy Jas.

Readily reducing two-length arrears when joining that rival on the inside before the third bend, Skywalker Cilla skipped clear in dismissive fashion thereafter, posting 29.25 (-20) with three and a half lengths to spare over Bartlemy Jas as Cabra Cleo stayed well when just a head further back.

Best of the remainder on Saturday when concluding a competitive undercard to the main event was the Kilvil Syndicate’s Kilvil Arnold (Ballymac Best-In A Heartbeat) who further extended his recent smart run of form while landing the A3 525.

A third win from his last four, Pete Pattinson’s March 2020 whelp had advanced to S1 grade at shorter and implementing that slick early dash off a level break from trap 4 this time, readily eased clear on the approach to the bend before streaking clear to a near four length halfway lead over Circus Dawn. The latter did very gallantly reduce the arrears late on but full value for his two-length verdict, Kilvil Arnold posted 29.59 (-20).

Saturday featured just a sole sprint contest and taking the opportunity to shed his maiden tag in the S4 330 was John Quinlan & Jack Treacy’s Stephens Shadow (Good News-Ela Patchy). Breaking best from trap 3, the August 2020 whelp immediately took command of the race and stretched eye-catchingly clear to a six length first bend lead. Running on strongly, Knockroe Serena made minor inroads when a four and a half-length second, but Stephens Shadow never sighted a rival while posting 18.22 (-10).

Commencing the action in the opening A6 525, Robert Kelly’s Paper Run (Pat C Sabbath-Riverside Annie) confirmed the promise of her maiden win last time out when doubling her win tally in a strong running two-length defeat of Totos Fancy in 29.79 (-20) before those latter connections enjoyed greater fortune in following A4 525 when Denis Fogarty & Tony McCormack’s Totos Day (Tarsna Havana-Emmas Fancy) claimed a third career win while holding on for a half-length verdict over Diego's Shay 29.76 (-20).

The night’s A5 525 delivered an eighth carer win for Paddy Scally’s Cabra Veyron (Kinloch Brae-Cabra Ebony) when leading throughout a three and a half length defeat of Kind Soul in 29.76 (-20) before Stephanie Ryan’s Knockalton Conor (Silverhill Shay-Kitmins Denise) claimed a thrilling 16th career win in the A4 525, leading from the third bend for a shorthead verdict over Superior Racking in 29.97 (-20).

Progressing for his opening effort in the Tipperary Cup, Tour Valley Syd (Droopys Sydney-Yahoo Amelia) returned a very smart performance to land his quarterfinal on Saturday when posting 29.17 (-20).

Fastest in the quarterfinals of the Tipperary Cup, Bobsleigh Dream (Droopys Sydney-Bobsleigh Jet) thoroughly impressed in her 29.06 (-20) winning performance and will hold obvious claims of victory in the hot feature event.

Again, filling second in his Tipperary Cup heat, Chrissie Slyne’s Rockybay Rusty (Rockybay Foley-Lemon Jane) caught the eye once more when reducing much greater arrears to just a length and a half while chasing home Tour Valley Syd in 29.17 (-20).