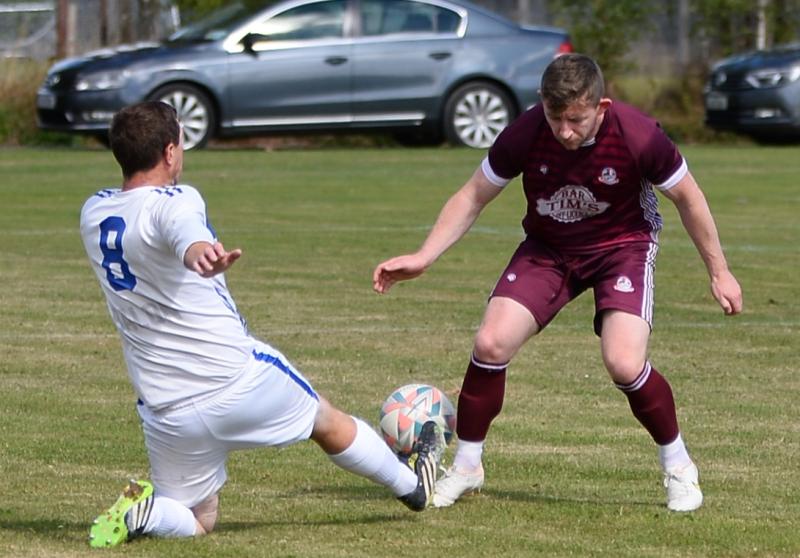 Tipperary Town 2 – 0 Mullinahone
Tipperary Town kept up their good start to the season when they made it three from three against newly promoted side Mullinahone at the Arra Road on Sunday morning.
Buoyed by recent good results they were fast out of the blocks and opened the scoring in only the second minute when Kevin Browne beat the visiting keeper with a well struck long range effort.
The home side had a number of early chances to double the lead, but Mullinahone weathered the storm and grew into the game, bringing out a number of good saves from the hosts netminder Eric Higgins.
But the name of the game is being clinical in front of goal, and the home side showed that they have become more so this term, when shortly before the break, good work from Karl Lowry and Dylan Cummins set up Markie Roche to test the keeper, and when he could only parry the effort away, Ryan Maher was on hand to fire home from less than eight yards out.
Tipp Town maintained this lead to the break, and the second period followed much the same pattern as the first, with both sides having plenty possession and testing the keepers on a number of occasions. But there were to be no more goals and the home side took the three points in the end.

Cahir Park 2 – 4 St Michael’s
St Michael’s seconds picked up their first points of the new season with a dominant win against a Cahir Park side who will need to do better if they are to bounce straight back to the Premier League after last season’s relegation.
The away side were better for most of the game and scored two goals in the first 20 minutes, with both of them scored after the home defence were pulled apart leaving their goalkeeper exposed to Ashley Kelleher and Antonio Rea.
The Park finally got a grip on the game and managed to pull a goal back before the break when Tom Keating scored right on the stroke of half-time.
But that reply was undone five minutes into the second period when Cahir Park were exposed again by Josh Flannery who caught them out with a well-taken free kick.
The real body blow for the home side was the Saints’ fourth goal 15 minutes from time, which was finished off by Evan Hawkins, getting beyond the Park’s offside line to score from 10 yards out.
The home side were awarded a penalty kick eight minutes from time which was finished to the net again by Tom Keating , but the visitors held on comfortably for the victory and the welcome three points.