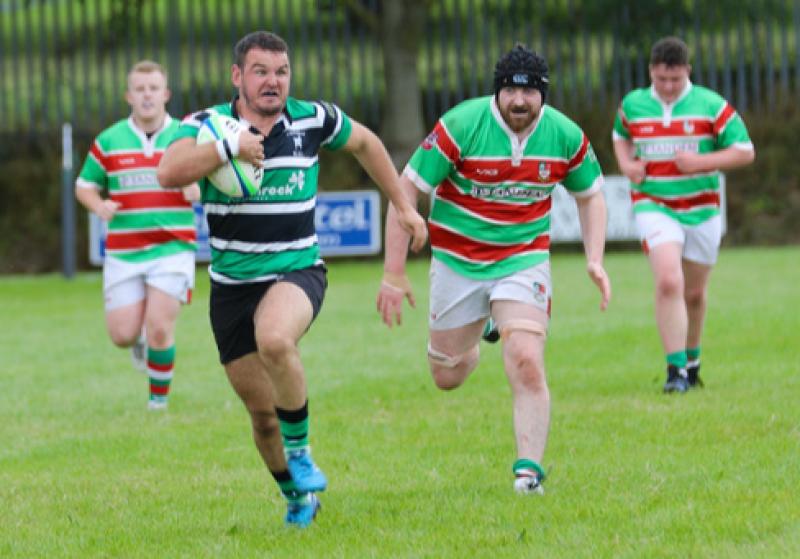 Clonmel’s Alex Sheehan’s blistering run takes him past the Sundays Well defence to score a try in the Munster Senior Cup game at Ardgeeha on Saturday last.

The opening game in any season is usually shrouded in cobwebs, but from the kick-off at Ardgeeha on Saturday last, Clonmel created a sparkling move that almost unravelled visitors Sundays Well.

The visitors recovered and the game settled into a phase of trench warfare, where Clonmel showed plenty of industry. The visitors had a slight advantage in their pack and it showed on 22 minutes when a well-marshalled maul brought them over the Clonmel line. They added the extras to put themselves 7–0 ahead.

Clonmel were undaunted and stayed very much in the game. They were rewarded on 37 minutes when a fine move ended with Clonmel’s out-half Albert Fronek, the standout player throughout, going under the posts and converting his own try to bring the home side level.

The second half opened with the teams on level terms and now Clonmel were matching the Sundays Well pack – they could have inflicted more damage on the visitors but errors at critical points were their undoing.

A lovely move on Clonmel’s left flank on 48 minutes released winger Darren Slattery, who had some work to do before dotting down. Fronek’s conversion put Clonmel 14–7 ahead to the delight of a good-sized home crowd. 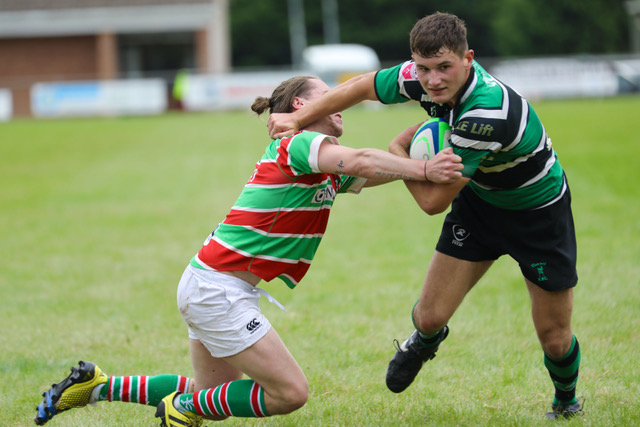 Clonmel scrum half Ross Slattery gets past this Sundays Well tackle during last Saturday’s Munster Senior Cup game at Ardgeeha. The hosts won 27-17 to create a little bit of club history in the process.

Clonmel displayed more enterprise now and took charge of the game. Their reward came on 50 minutes when some nice interplay gave full back Alex Sheehan the opening and he streaked from halfway to the line to score a great try, which had the crowd on its feet and which put Clonmel 21–7 ahead.

Sundays Well were wilting slightly now and on 58 minutes Fronek added a penalty to make the score 24–7 to the home side. Perhaps it was early-season fatigue but Clonmel now conceded a string of penalties and allowed Sundays Well back into the game.

Another maul by the visitors closed the gap to 24-12 and when they inflicted another mauled try on Clonmel on 69 minutes to close the gap even further to 24-17, the crowd became decidedly nervous.
Thankfully, Well had missed two conversion attempts.

Clonmel arose again and battled their way downfield – it became a torrid battle but the home side were not for turning – tempers frayed and the referee flashed two yellow cards, one to each side. With calm restored, Clonmel remained in Sunday Well’s territory and were rewarded with another penalty to make the final score 27-17.

This was a good win and the sort of workout which was needed to blow away the cobwebs. It also made a little bit of history as it was Clonmel’s first-ever Munster Senior Cup win.

It was a good all-round display for Clonmel, who were ably led by team captain Diarmuid Devaney while the Slattery brothers, Ross and Darren, put in a good shift.

YOUNG MUNSTER AT ARDGEEHA ON SATURDAY
The reward for this win is a quarter-final match against Young Munster this Saturday September 17 at 2.30pm in Ardgeeha. This promises to be a cracker so we’re hoping for another big crowd and another good performance.

Thanks for your support.