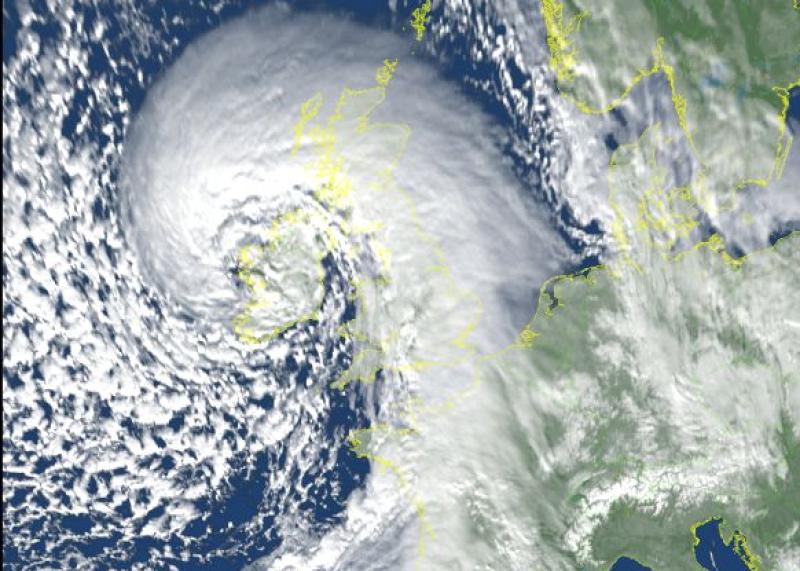 Storm Barra has hit the Status Red Warning level in parts of Ireland with Met Éireann reporting gusts of up to 135 km an hour in Cork.

A storm is declared violent when wind speeds reach between 103–117 km/h. Anything above 118 km is classed as a hurricane on the Beaufort scale.

The wind has gusted at levels above 100 km/h at the Roches Point and Malin Head Stations.

Met Éireann has also recorded wave heights of up to 25 feet in the Atlantic.  Storm forecast below tweet.

NATIONAL FORECAST issued on December 7 at 12:23 pm by Met Éireann

Storm Barra will bring severe and damaging wind gusts today. The winds will be strongest on exposed coastal areas of Munster, Connacht and later west Ulster. Gale to storm force southwest to west winds will veer west to northwest in direction. There will be widespread squally showers, some turning wintry. Coastal flooding is expected along with travel disruption. As the eye of the storm passes over the centre of the country winds will fall light and variable for a time. Afternoon temperatures of 5 to 7 degrees.

TONIGHT
The strong winds continue through Tuesday night. There will be frequent squally showers, some of sleet and snow with hail and isolated thunderstorms. Further damaging and possibly disruptive wind gusts are expected, especially in Atlantic coastal counties with gale to storm force west to northwest winds. A cold night with lowest temperatures of 1 to 4 degrees.

TOMORROW - WEDNESDAY 8TH DECEMBER
A cold and windy day tomorrow, Wednesday, with bright spells in the south, and widespread showers, some of sleet and snow and prolonged over the northern half of the country. Highest temperatures of 4 to 7 degrees in strong to gale force northwest winds.