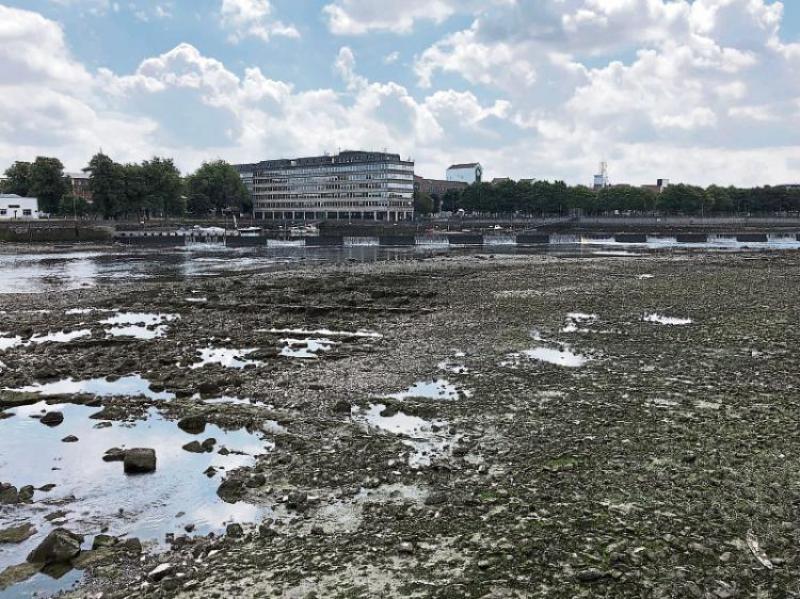 The Curraghour Falls in Limerick this week

Concerns have been raised over water levels in the River Shannon and what impact low water levels would have on the river if Irish Water gets the go-ahead for its €1.3bn plan to pipe 330m litres of water a day from Lough Derg to Dublin.

The Old River Shannon Trust, which monitors the river, posted on its Facebook page this Thursday that the flow on the Shannon at Curraghour Falls in Limerick City had been reduced to a relative trickle due to the extreme drought and that there had has been no hydroelectric generation at Ardnacrusha power station in two weeks as the water has run out.

"If the Dublin pipeline was already built flows would be c.40 per cent less than this - and the river would be at a real risk of drying up. Just 11 cubic meters of water per second is currently being released from Lough Derg - yet Irish Water are planning to take 4 cubic metres per second.

"This is not a sustainable proposal when droughts like this current one are factored in. Once the scheme is in place, the abstraction will be all year round 24/7 no matter what climate change brings," they said.

In a statement to the Tipperary Star, an ESB spokesperson said the company continued to monitor Shannon levels closely, with flows on the Shannon at Parteen Weir currently averaging 11 cubic metres per second.

This is being discharged down the original river Shannon in keeping with ESB’s responsibilities to maintain a statutory minimum flow above 10 cubic metres per second.

Discharges in the coming days will depend on weather conditions and river flow. The company publishes forecasts daily on the hydrometric information pages on ESB.ie, but the forecast discharges are ESB’s best estimates at a single moment in time.

"Electricity generation at Ardnacrusha is, therefore, minimal at present and this situation is likely to continue through the dry spell," the spokesperson said.

They said that the ESB dual concerns during this dry spell was to maintain water quality levels by ensuring the statutory flow is maintained, and around public safety.

"ESB would like to remind the general public of the dangers and potential serious consequences of swimming in any ESB reservoir, which includes the Ardnacrusha headrace and tailrace. This is due to the risk of uneven ground, deep waters, changing water levels and fast-flowing waters," the spokesperson said.

Meanwhile, Gerry Siney of the River Shannon Protection Alliance said that the heatwave had reduced the Shannon to a  "mere trickle".

"If you extract 330m litres of water, given the conditions, there would not be a single drop of water that will come through. There is barely 10 cubic metres going down the old River Shannon at the moment; that is barely sufficient to support migratory fish. Decrease that by just a fraction and you won’t have migratory fish going up the river. You take water out of any part of the Shannon, you will affect all of it.," he said.