The visit included a flood -risk briefing and a tour of the historic and cultural quarter. 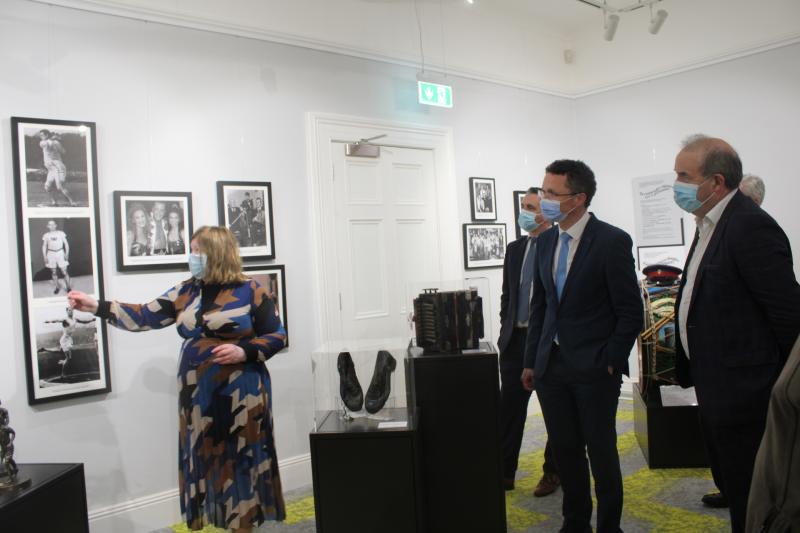 The visit included a flood briefing and a tour of the heritage quarter.

Mr O'Donovan addressed the group of locals and councillors at the Nenagh tourist office.

He acknowledged the "knocks" the town has gone through during the recession and praised the council's work in regenerating the area.

"To see the town being transformed and the investment here and it really has come on massively in the last 15 years, and great credit has to go to the council," said Mr O'Donovan.

Mr O'Donovan began his visit by meeting with Tipperary County Council and OPW engineers onsite to discuss flood risk on the Nenagh River.

Mr O'Donovan said the consultation for the flood relief scheme would begin next year.

From the river, the Minister of State visited Nenagh Castle, the heritage centre, courthouse and jail.

In a press release from the Office of Public Works, Mr O'Donovan said.

"The OPW and Tipperary County Council have a strong working relationship and have been working hand in hand here in Nenagh to make one of the town's key attractions, Nenagh Castle, accessible to visitors following its conservation by the OPW in 2012."

He concluded his tour at the new Nenagh tourist office in Banba Square.

Mr O'Donovan said there was a "unique culture" and friendliness in Tipperary, and he was glad to see how Nenagh had progressed.

"There's a uniqueness here and a friendliness in this part of North Tipperary that I got and was certainly very fortunate to be exposed to," said Mr O'Donovan.

He also said that the work of his office was about more than buildings but also communities.
"We have an obligation to look after communities," said Mr O'Donovan.

Mr O'Donovan said his office is committed to working with stakeholders to continue the development in Nenagh and North Tipperary.

"We look forward to working in partnership with the Council, the Department of Housing, Local Government and Heritage and Fáilte Ireland to support the development of Nenagh's Historic and Cultural Quarter as a leading tourist destination and gateway to Ireland's Hidden Heartlands," said Mr O'Donovan.

The office is open from 10am to 5pm Tuesday to Saturday