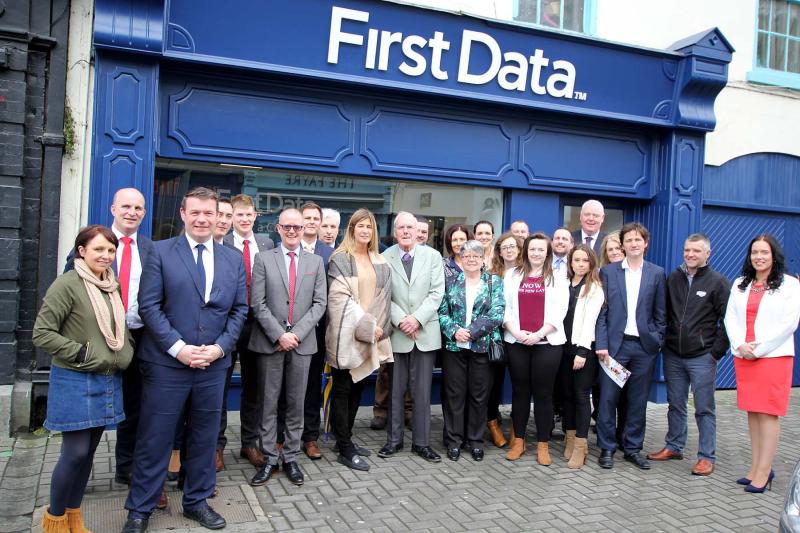 The First Data facility due to open in Nenagh by the end of 2017 will be a world first, it was revealed at the opening of the company's recruitment office in the town this Monday.

The global giant, which will eventually employ 300 people, will develop its Clover products at its research and development centre in Stereame.

“It will be first of its kind for First Data,” said vice-president of HR Rosemary Reilly. “It is a world first for Nenagh.”
While the company has a facility outside Dublin, she said the plant would be a separate facility.

Meanwhile, Pete Kennedy, vice-president strategy and programs in charge of R&D and innovation at the Nenagh centre, described Clover as the “next generation point-of-sales” device that can be used for accounting, warehousing, distribution, restaurant orders and payroll.

It is already in use in a number of places in Nenagh and in about 3,000 throughout Ireland.

However, Mr Kennedy said, Clover was only one aspect of the company's businesss, and they are also looking at online fraud and virtual infrastructure.

The company works with Stripe, the online company operated by Nenagh brothers Patrick and John Collison.

Opening the recruitment office was described as “the first step in a momentous journey for First Data” by Mr Kennedy. He praised the input by Tipperary County Council, the IDA and local TD Alan Kelly in bringing First Data to Nenagh.

“With the support of the local community , we know it will be a success,” he said.

Meanwhile, Ms Reilly said the company was looking to hire people with a “natural curiousity” to work in research. While they will need some staff to have a fintech background, they are also looking at different types of graduates, including those in gaming. First Data has already visited Thurles LIT and UL, as well as other colleges, to seek out potential employees.
Ms Reilly was also full of praise for all those who facilitated their move to Nenagh.

“I want to sincerely thank the people of Nenagh for all their support,” she said. “Without them we would not be as successful as we were in getting set up.”

Deputy Kelly described the opening of the office as a “very satisfying day” and an “important milestone in Nenagh”.

He predicted about 75 people will be employed at Stereame by the end of the year . He thanked First Data's Tom Higgins and his team for coming to Nenagh and declared: “We will embrace them. Clover will be tailored and built in Nenagh. It is a world first and it is happening in Nenagh.”

Deputy Kelly hoped other IT companies would now cluster in Nenagh in the same way as pharamceutical firms had in Clonmel.
Tipperary CEO Joe MacGrath said the office was an indication to the people of Nenagh that First Data was now part of the community.