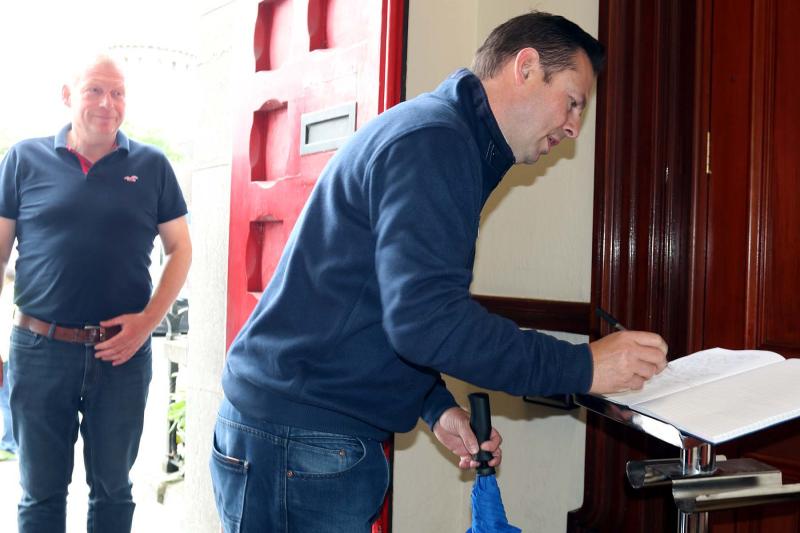 Dermot Kinane signs the book of condolence in memory of Detective Garda Colm Horkan at Nenagh Garda station, while Damien Mulcahy waits in the queue

Tributes were paid at Nenagh Court last Friday to Det Garda Colm Horkan who was killed in Castlerea last week.

Solicitor Elizabeth McKeever extended sympathy on behalf of local solicitors to the Horkan family and An Garda Síochána.

Judge Elizabeth MacGrath, citing the American television series Hill Street Blues, spoke of how she often tells local gardaí to “be careful out there”.

Gardaí put thaeir lives at risk to protect the public and they often did not know what sort of situation they will encounter in their daily duty, she said.

Judge MacGrath said that the public did recognise the service of the gardaí.

“That service was very much appreciated during the Covid-19 crisis. People are very grateful for what the gardaí do,” she said.

Judge MacGrath mentioned that she had presided in court in Castlerea on a number of occasions before.

Judge MacGrath expressed her condolences to the people of the community as well as the Horkan family, and the gardaí.

On behalf of An Garda Síochána Nenagh District, Sgt Michael Keating thanked the judge and Ms McKeever, and expressed sympathy to all concerned in Castlerea.

Sgt Keating added that a book of condolences had been opened at Nenagh Garda station.

Judge MacGrath said the public should be made aware of this as many people would like to sign the book.