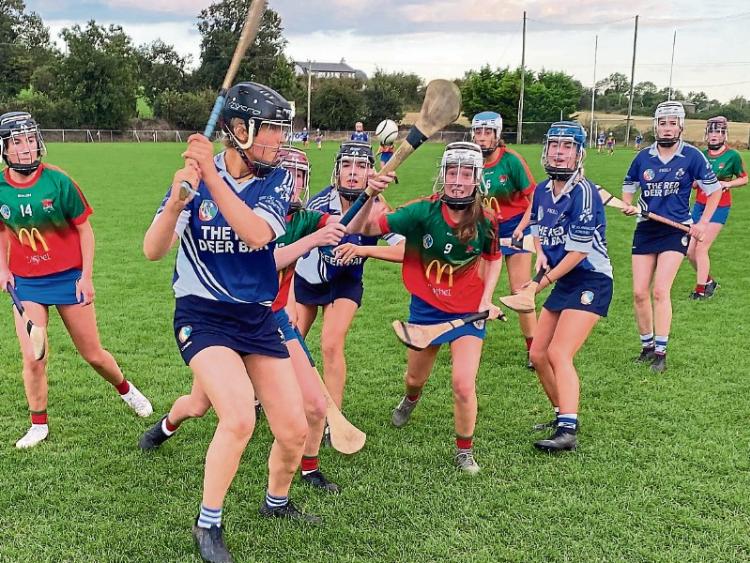 Action from the recent County Under 16 A Camogie final between Cashel and Eire Og Annacarty/Donohill which went to extra-time before Cashel emerged winners.

There will be a novel County Senior Camogie final this year after Drom/Inch and Clonoulty won through their respective finals at the weekend.

Drom/Inch got the better of Cashel by seven points on the scoreline of 2-19 to 2-12 at The Ragg on Sunday.

In the other semi-final Clonoulty overcame Burgess/Duharra in a thrilling contest by 0-18 to 1-13.

The final is  fixed for Saturday, September 19.

County Under 16A Final

A classic encounter took place between the great rivals Cashel and Annacarty in this year’s Under 16A final. Annacarty were quick out of the blocks playing at a high tempo with goals from Nia Donovan and Jennifer Heffernan. Cashel stayed in the match with Grace Moloney getting four first half points. Cashel had a super sub in Hannah Butler with 1-1 during normal time and her quick reaction to a chance in extra-time for Cashel’s second goal proved crucial. Anna Fahie began to dominate for Cashel in extra-time but Annacarty fought to the end with their centre diamond of Orla O’Brien, Shauna Heffernan, Danielle Ryan and Cora Heffernan very influential and Katelyn Ryan excellent on frees and soloes. Cashel had many good displays with Lillie Fahie’s long clearances and frees, Katelyn Downey and Allesia Mazzola’s workrate catching the eye.

Clonoulty captured this title after getting a serious fright from Holycross. Clonoulty started the stronger with points from Bronagh Coffey (3) and Kate Ferncombe but Holycross took the lead through two Clodagh Morris goals. Maeve Ryan and Holly Maher were also causing Clonoulty problems. After the second water break however, Clonoulty took control with a series of points from Kate Ferncombe and Abbie Ryan.

Holycross v Boherlahan in Thurles Sarsfields outside pitch at 1 pm

All games Saturday September 12 at 5pm.

KB Sports Under 14B Semifinal

KB Sports Under 14A Semi Final

Holyhill Plastering Under 16A Final

KB Sports Under 14B semi-final