Working with nature: Con Traas on the eco ideas that helped his farm thrive 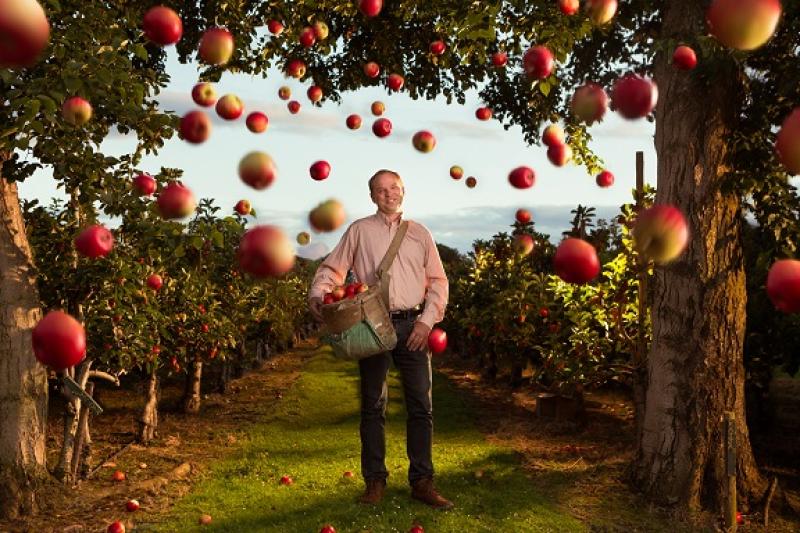 For at least three thousand years, the apple tree has been growing in Tipperary and for one Moorstown farm it has been at the heart of creating a thriving business.

This year has been particularly good for growing, with a busy harvest expecting to double last year’s yield. Owner Con Traas maintains that this is a “good problem to have."

The orchard was developed by the Traas family who immigrated to Ireland in 1968. Since the 1800s, the Traas family had been fruit growers in the Netherlands and when Con’s parents Willem and Ali had difficulty finding suitable land they decided to make the move. A farm on the Limerick to Waterford Road between Clonmel and Cahir grabbed their attention due to its existing orchard that produced a great yield.

In the early days the family grew tulips, dried peas, grain crops and strawberries while developing the orchard.

“They wanted to set up a fruit farm but it wasn’t possible to do all that at once so they did other things with the land and didn’t put it into fruit straight away,” said Con.
A problem that faced Willem and Ali was the lack of a local marketplace to sell their produce.

Their solution was to place a sign at the farm’s entrance and open to the public where the busy shop continues to operate today.

The farm began to generate a regular custom and after ten years they had garnered enough buyers to plant a second orchard.
The Apple Farm is still the original 60 acres and now produces 60 varieties of apples, while also growing strawberries, plums, cherries, raspberries and pears.

The business has developed a range of products including sparkling apple juice and cider vinegar.

At the core of the farm’s ethos is conserving the environment.

Not only do the apples generate a buzzing ecosystem of their own, Con makes a conscious effort to encourage pollinators.

Amongst the bountiful crops, sections of the land are reserved for wildflowers such as borage that provides a haven for pollinating insects.

Con developed these initiatives after noticing the insects essential for fruit were declining.

“As we were growing more apples, there was less space for flowering plants because in an orchard there aren’t a lot apart from the apple blossom,” said Con.

“About ten years ago we noticed for the first time that it was affecting the ability of the apples to give full crops. We said it’s our responsibility so we started planting some wildflower areas to try and get the pollinator numbers back up.”

Rotating mowing the grass between trees ensures a row of flowers is always in bloom which also draws pollinators.
Since practising these conservation initiatives, Con has noticed a huge increase in solitary bumble bees and distinctive peacock butterflies on the farm.

“If you don’t have your nettles there, you won’t have those peacock butterflies. It’s amazing how if something depends on nettles, it can change your perspective on them.”

Conservation of the environment is a priority in every aspect of the farm. Con installed sustainable solar panels and now aims to produce a quarter of the energy needed for the business.

To pasteurise the juices, solar water-heating panels were added to generate 80% of the summer-time requirement.

This has greatly reduced the farm’s dependency on non-renewable energy required to store and manufacture produce.

“We are trying not to apply anything that will upset the biological balance that’s already there.”

Apples are a positive addition to any farm due to their unique nature that absorbs carbon while also producing crops.
An acre of apples can extract about fifteen tons of carbon dioxide from the air each year, alongside producing six tonnes of oxygen. “The amount of apples growing in Ireland has declined a lot in the last 50 years and that’s because of market forces more than anything else,” explained Con.

One reason for this was the expansion of the European Union, with Eastern European countries driving market prices down due to lower rates of pay and large-scale operations.

“You would imagine that it should be possible to double or triple the apple production in Ireland without any negative implication on other growers.

“You could have another grower like me ten or twenty miles down the road and I don’t think it would make any difference to me, there’s certainly an upside potential in that.”

Con attributes the success of the farm down to people’s tendency to support local, alongside their freshly picked produce.

Customers also enjoy the novelty of travelling to a farm that is also home to the successful Apple Camping and Caravan Park that can house 60 people every night.

Considering the topical discourse about agriculture’s contribution to carbon emissions, Con is optimistic that positive change is possible.

“I know some people involved in the research in the agricultural side and I definitely think it will be very interesting when farmers really start embracing the things that are already available to help reduce emissions,” said Con.
“I think we will probably do better than we are expecting. There’s a bit of a fear of the unknown about it and the people who have been doing research are reasonably optimistic.

If the success of Apple Farm is anything to go by, business and nature can work in harmony to create a booming and sustainable enterprise.