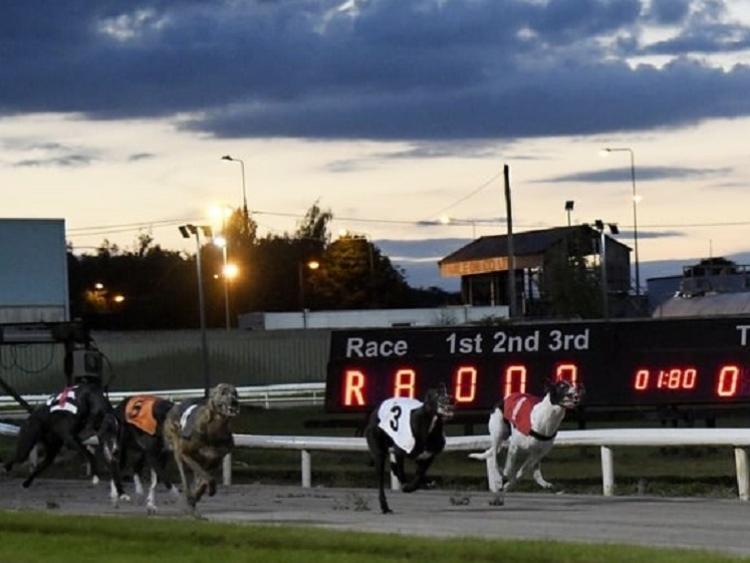 A stellar renewal of the Centenary Agri sponsored Tipperary Cup in 2020 drew to a conclusion at Thurles Greyhound Stadium on Saturday last and bouncing back from defeat at semi-final stage, Riverside Leo (Knockglass Billy/Adamant Gem) returned to his brilliant best in a powerful winning performance.
A first prize of €7,500 will find it’s way to a most deserved winning owner, National Produce Stakes sponsor Larry O’Rourke, after what was a brave display by the Graham Holland trained star for whom a crucial early lead was in jeopardy having been led at trap rise.
Housed in Trap 3, the disappointing absence of Gettin Up to his inside left Riverside Leo with welcome racing room for local cheers could be heard as soon as the boxes opened when it was Pairic Campion’s Boyhero who flashed from his Trap 4 berth.
Finally reaching the showdown of his coveted local event at the third time of asking, that wonderful veteran gave himself every chance when a length to the good in the early exchanges. With a vital early lead under threat however, Riverside Leo produced his trademark early dash once in full stride and gamely battled his way to the front when ranging up on Boyhero’s inside before tackling the opening bend.
Stretching to a near three length lead at the top of the back-straight, the Campion charge gave game chase but Leo extended his advantage to the closing bends.
Producing a challenge behind the leading duo, Laughil Josh had his hopes ended when checked by Boyhero at the third turn but all was academic as Riverside Leo was never for catching and the champion elect completed a wonderful final performance with three and half lengths to spare over Boyhero in 28.65 (-30) for the 525-yard trip, with Ballyhimikinbolt staying well for third when just a neck further back.

Kirwan’s Power is Excessively consistent
Having turned two years of age in May, the remarkable career start of John Kirwan’s Excess Power (Kinloch Brae/Rushmoor Olive) has only seen this most consistent of racers outside the forecast places on one occasion from 13 starts and having immediately taken well to the circuit a week earlier, he duly confirmed the form of his Thurles debut when claiming the final of Saturday’s Centenary Agri A1 525-yard Stake in game fashion.
A 28.98 (-30) semi winner, Excess Power found another adept break from Trap 2 and commanding the inside at the first bend, repelled fellow semi scorer Allowdale Shelly for a one length lead at the top of the back-straight. Never afforded an easy passage by that persistent challenger, there was still little more than that same length to the final turn but staying stoutly on the run to the line, Excess Power justified favouritism when stretching to a three and a half length verdict while posting a very smart 28.84 (-30) as Chubbys Vic stayed very strongly for third.
Having displayed impressive progress when claiming her semi-final of the Centenary Home & Garden A4 525-yard Stake, Diarmuid Quinlan’s Kiwi Kaye (Droopys Jet/Princess Aine) duly converted her final opportunity, justifying favourite odds in a brave victory.
Moderately to stride from Trap 1, her rails pitch proved beneficial in a bump with the early paced Petite Fifi before the September 2018 pup skipped clear to the back-straight. In command thereafter, Kiwi Kaye completed with relative ease, posting a smart 29.25 (-30) with three and a half lengths to spare over the strong staying Jayms Sabbath. Taking a rise to A1 grade following just a fifth career start, she retains much scope to handle that upgrade.
We will again have final action on the card this coming weekend and backing-up his impressive opening round win in the Centenary A2 570-yard Stake, Jim Morrissey’s Graigue Retalick (Droopys Nidge/Graigues Penny) took another major step forward when a dominant winner of the first semi-final on Saturday.
Breaking well from Trap 4, he maintained a middle path on the long run to the bend before sweeping the corner with a length advantage. Extending to the back-straight when chased by the duelling Piercestown Eske and Kilgraney Island, the former did make late inroads when winning the battle for second but Graigue Retalick was full value for his two-length margin of victory in a slick 31.15 (-30).
The second semi-final was won in similar fashion and also entering this week’s final with an unbeaten tag will be Geoff Parnaby’s Tarsna Dettori (Skywalker Rory-Running Sweet) although the Borrisoleigh charge was forced to work harder for his first bend lead when not so swiftly stride.
From Trap 4, he trailed by two lengths in the early exchanges but relishing the long run-up, made his way to the rails while displaying much the best early pace. Striking the front while turning, he extended to the back-straight when keenly pursued by Cloneyogan Dazl and Town Mouse.
That order remained the same to the final bend and displaying ample resolve to protect a one length lead, Tarsna Dettori repelled the late challenge of Cloneyogan Dazl by a length with Exchange Snapper staying strongly to fill the final qualifying place in 31.60 (-30).
There was just a sole sprint contest on the Saturday schedule and the S1 330-yard contest brought a welcome return to the winner’s circle for veteran sprint campaigner Knockalton Guy (Cracking Mn/Turbine Tulip) who displayed all his battling qualities in a most game performance.
Eamon O’Brien & John Byrne’s 2019 Fair Warrior runner-up could hardly be sighted on the long run to the bend as he raced amidst a tightly packed field while Archgrove Ronnie showed just in front on the approach to the turn.
Emerging in second position while turning, Knockalton Guy produced his challenge on the outside approaching the home-straight and a powerful surge on the run to the line saw him wrestle the lead from Archgrove Ronnie close home for a head verdict in a fast 17.92.

Top Dog
Winning three of his four heats while bouncing back from semi-final defeat, the blistering early pace of Riverside Leo was the telling factor in his 2020 Tipperary Cup Final victory.

Best Bitch
The hugely progressive Kiwi Kaye again impressed with the promise of more to come following her A4 Stake Final success.

In a warm contest, the Feel Good Racing Syndicate’s Deep Thought (Boherna House-Galway Fancy) showed pace throughout when holding Lacken Jim Bob to less than two lengths and should enter the same notebooks as the winner.