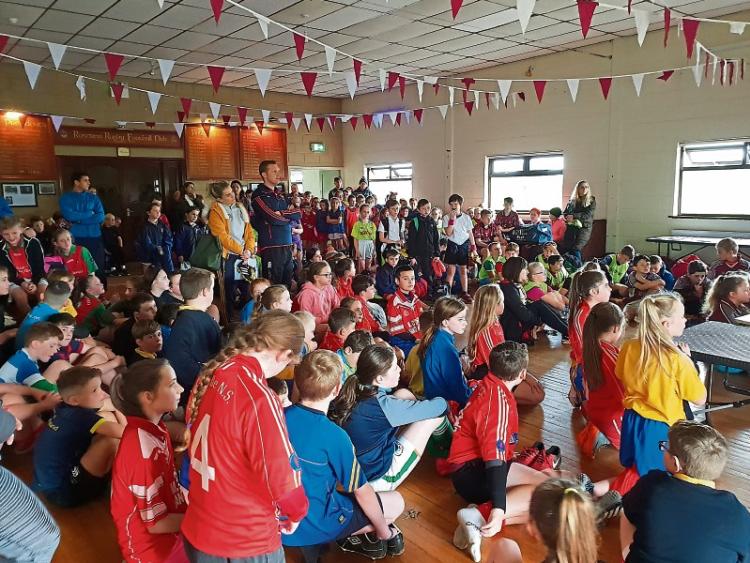 We had the privilege of five local school teams attending, Corville, Scoil Eoin, Dromakeenan, St. Cronan's and Shinrone, said organiser William Hayes. “It was an early start to the day with matches kicking off at 10.30am. In all a total of 150+ young players attended. We had 2 divisions, a Senior (5th + 6th) and a Junior League (3rd + 4th).

It was a great opportunity to introduce young players to the fantastic game of Rugby. The majority of these kids had never even held a rugby ball before let alone competed in the sport.

All teams showed fantastic energy, eagerness and enthusiasm towards the game. The comradarie between these groups of young players was a pleasure to watch. All teams started strong displaying great ball handling skills and great agility on the pitch. These young players showed the utmost of respect to all the coaches and referees on the day. With Shinrone National School taking home the trophy for 'Best Sporting Team'. A very well deserved achievement.

Gaining a place in both the Senior and Junior finals was no easy task. Both Scoil Eoin and Shinrone teams fought hard but unfortunately it was not their day.

The Junior Final saw Corville taking on Dromakeenan. This game proved to be a very close match with both teams putting in exceptional performances. Corville came out fighting in the 2nd half and came out on top with a narrow win.

In the Senior Final yet again Corville featured against St. Cronan's. This was an intense and very competitive match with great skills on display from both teams, each equally hungry for the win. After some great rugby Corville pulled into the lead taking home the Senior trophy.

Friday proved to be a very successful day for Roscrea R.F.C. Special Thanks to all the schools (teachers and players), Referees, Parents who came to support, Co-ordinators, Volunteers and C.C.R.O's Mark Lowan and team, President Brendan Hyland and Vice President Paul Rigney.

If your National School would like to take part, Please send us a message on Facebook or call 0872384668.

Please note: Mini Rugby Training every Sunday morning for both boys and girls at 11am. New players always welcome