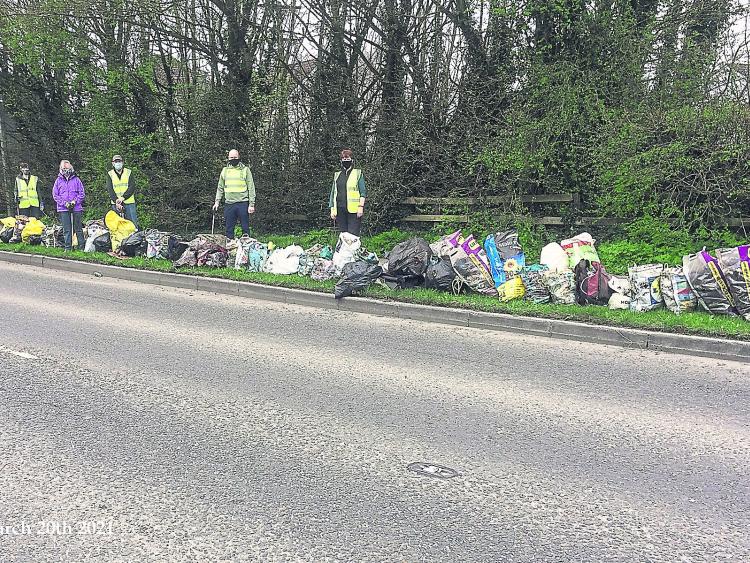 I’m sure everyone will agree that the past year has been a tough one with all of us being confined to within 5km of our homes for the majority of the time.

Many now work from home and others, such as our Community Employment Workers, are unable to carry out their duties on behalf of Tidy Towns because of the pandemic arrangements.

Last year even saw the official Tidy Towns Competition suspended as a result. Tidy Towns members did still continue to work, in small socially distanced groups, maintaining those flower beds and gardens that they have established over the years.

Included in this maintenance was the annual litter-pick and big sweep. The group usually takes a “holiday” for the months November-February.

This year, the group resumed its work in February with litter-picking around the approaches to town. This is best done around this time of year before the grass grows too high and makes it difficult to find and pick items. This pandemic has a lot to answer for, but one thing is clear – it isn’t responsible for litter – no virus put a bottle, can or food wrapping out the window of a car!

Since February, members have collected and taken numerous trailer loads of litter from our approach roads – Some 40 bags from the Motorway into Kennedy Park – picked by Anthony and Valerie Bourke; another 20 from the Limerick Road – Denise Dwyer and Thomas Feehan do litter-picks on the Monastery Road - the list goes on.

In total, since February 19 and up to March 15 the amount of litter collected totalled over 1,000kg (a ton!) – we know this because we bring it to the Roscrea Amenity Centre where it’s weighed and disposed of.

On Saturday last March 20, Tidy Towns members and helpers gathered at the Fancy Fountain to continue the tidy-up. An amazing amount of litter was collected – over three large trailer loads – weight to be published later.

Much thanks are also due to Barney Loughnane and Donie Walsh who do continuous litter-picks throughout the year!

The following picture shows litter collected from the area behind the ditch at the by-pass – from the speed limit sign to the roundabout. It was comprised mostly of broken household items, drink cans and bottles and general household waste – the collection filled our high-creeled 7x5 trailer!

It is most disheartening to find our streets and approach roads so dirty with litter because time and again as Tidy Towns members we constantly highlight the hazardous nature of litter to our health and the environment – for example, household rubbish disposed of in this way attracts vermin. It is a big issue with Tidy Towns Judges too!

This year’s competition is going ahead and so we have begun the clearance.

There’s a change in the nature of the litter this year – yes, there’s still the issue of freely recyclable cans and bottles being dumped – but their volume has increased; disposable wrappings from take-away outlets has also increased as has the amount of general household waste. There is also a greater amount of naggin bottles appearing – a new trend! All these have now been joined by a new element of waste – disposable masks!

Roscrea Tidy Towns would like to thank all the members and helpers who turned up on Saturday. The group meet at the Fancy Fountain every Saturday morning at 10 am to do work in socially distanced groupings.

Roscrea Tidy Towns is appealing to the public to be mindful of how it disposes of its litter as not only does it make things difficult for us, but it creates an adverse impression for any visitor to our town – and they will come once this lockdown is over.