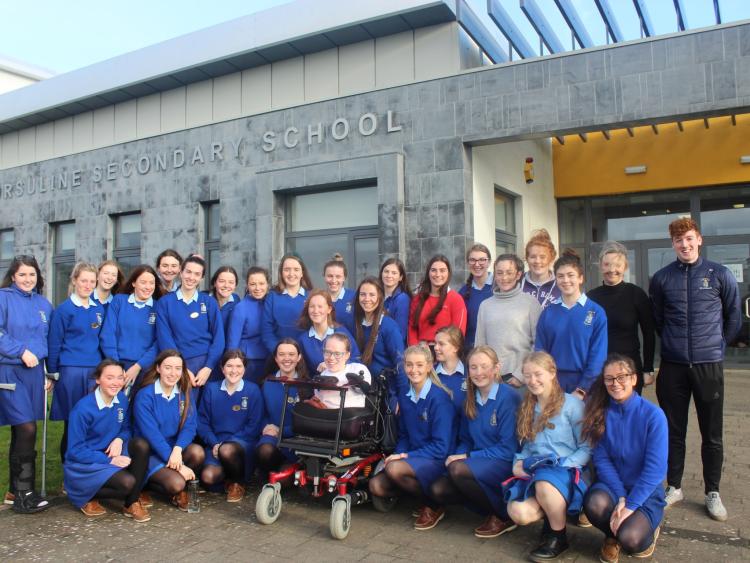 The Ursuline was delighted to welcome Joanne O’Riordan to the school on Friday, 10 January, 2020.

Joanne, a sports journalist with the Irish Times and disability activist, is one of only seven people in the world with Tetra-amelia syndrome, a condition whereby she was born without limbs.

She was vivacious, energetic and her message of positivity really resonated with students and staff.

The 23 year old self declared people person has a great attitude to life. She doesn’t give up on things easily refusing to let her disability or anything else get in the way of achieving what she sets her mind to.

Joanne, a natural speaker with a quick and lively wit, had the students laughing, smiling and nodding in agreement at her wise words.

She spoke about her life now, growing up, her degree in Criminology, her love of sport and her work in journalism. The students had loads of questions for her such as what did she think her life would be like if she’d been born in a different era when technology wasn’t as advanced, what would she love to achieve as a journalist and what her typical day is like.

She told them she loves meeting people, ordinary people doing extra-ordinary things and listening to their stories.
She always tries to show the brighter side of life rather than focusing on all the sadness and badness in the world, both in her personal life and her work.

She advised them not to be too tied to specific goals as life throws up random things so it’s best to keep an open mind. She told them to put positivity into the world and they would get it back in spades.

She was thanked by fifth year students Katie McCarthy and Méabh Casey, who made the initial contact with Joanne and had a big part in arranging the visit.

Before she hit the road Joanne met with the Senior A Camogie panel to give them some motivational words ahead of their Munster Final the following day. She told them everyone on the team has the potential to be a hero.

She urged them to go out, give it their all and find the hero within. She certainly empowered them to rise to the challenge as they came back from four points down at half time to beat the reigning Munster and All Ireland Champions, St Angela’s, Waterford.

Thanks to Joanne for taking time out to come to the Ursuline and making such a big impression and leaving a positive imprint on all who heard and met her.