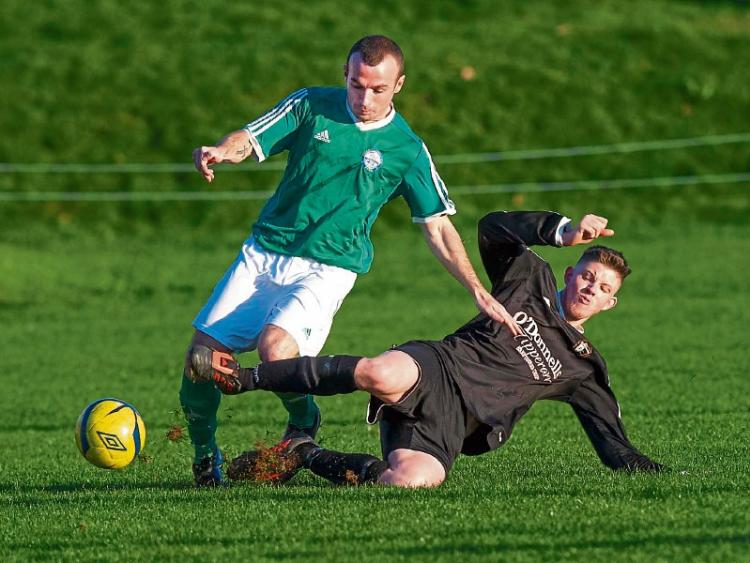 Clonmel Celtic advanced to Round 3 of the Munster Junior Cup with a comfortable 9-2 win against Kilsheelan United at Celtic Park on Sunday last, belying their poor results so far in the league and perhaps giving notice of a better second half of the season to come.

The home side were always in control and led by 3-1 at the break with a double from Seanie O’Hara and a goal from Kyle Ryan. The Second Division side had given themselves brief hope with an equaliser from Ronan Quigley early in the first half.

However, Celtic stretched their lead in the second period with both O’Hara and Ryan completing hat tricks. Paul Kennedy got in on the act with a brace and Peter O’Dowd scored his first of the season with a fine strike to score his side’s ninth.

Evan Comerford scored a late consolation Kilsheelan United  from the penalty spot but it was no more than that.

St Michael’s advanced into the open draw section of the Munster Cup with a comfortable win against a depleted Cahir Park side on Saturday last.

Always in control in the game, they still had to work to overcome the visitors who rallied well in the second half without every looking like they had the wherewithal to really trouble the home defence.

After a number of early chances went a begging, the hosts finally took the lead on 24 minutes when a Colin Bargary found the head of Paul Breen who nodded home at the far post. Willie Armshaw almost doubled the lead three minutes later but was denied by an inspired Park keeper.

The visitors’ best chance of equalising came ten minutes before the break but Alan O’Donnell’s effort went wide of goal. Ahead by the single goal at half time the Saints continued the second half in the same vein, controlling the game but struggling to find that little bit of quality to really open up the Cahir defence.

In not doing so, they allowed Cahir to grow in confidence and they had two more good chances midway through the second period only to be denied by poor shooting and good keeping by Adrian Walsh.

The home side however re-asserted themselves and got the second goal they had been craving, 11 minutes from the end when following an Olly O’Driscoll cross, Armshaw's shot took a bad deflection and deceived the keeper before nestling went in the net.

Armshaw removed all doubts about who was going to emerge victorious when he cut in from the touchline in the final minute, and his snap shot whizzed past a stranded Mlyoczak in the Cahir goal to make it 3-0.

After their defeat against the St Michael’s first team in the FAI Cup last weekend, Tipperary Town would have hoped for a better result against the Saints seconds at the Arra Road on Sunday last, but in the end they were dumped out of the Munster Junior Cup with the neighbours now enjoying two teams continuing to fight it out for provincial success this season.

The visitors came with a plan and were always the better side, dominating a home side that were disappointing on the day and if anything were probably lucky that the scoreline wasn’t even worse on them. Both teams had chances early on, but it was obvious that the home side were not firing on all cylinders as the visitors took control and the lead in the 18th minute when Alex Ryan Wynne finished from close range after Donogh Leahy had headed down an Adam McGrath corner kick.

This was how the game went to the break and things stayed much the same in the second period with the visitors dominating both possession and chances.

They had to wait however until ten minutes before the end to get the all-important second goal when substitute Jason Sutton crossed and Danny O’Brien took his time in firing to the corner of the net to make it 2-0.

Ned Lowry got across in the final minute to block Town’s Donogh Leahy as he tried to break clear but it was Saints day as they qualified for an away tie with Clonmel Celtic.

Division Two side Kilmanahan United welcomed Cullen Lattin in the Munster Junior Cup on Sunday last but were unable to pull off a giant killing as the struggling First Division side after a well contested tie.

Cullen started strongly and opened the scoring in the 10th minute when Russell Bowes found himself one on one with the home keeper and he made no mistake from close in. After that though the home side acquitted themselves well and were fully deserving of the equalising goal that came deep into time added on at the end of the first half, with a strike by David Garrett.

The game remained on a knife edge into the second half until the visitors regained the lead thanks to a free kick that was powered to the net by Trevor Cosgrave.

The  home side grew increasingly desperate to try to get back in the game and consequently left gaps at the back. One of these was expertly exploited by Cullen and they broke away five minutes from the end to get the all-important third goal  courtesy of a fine finish by James Riordan.