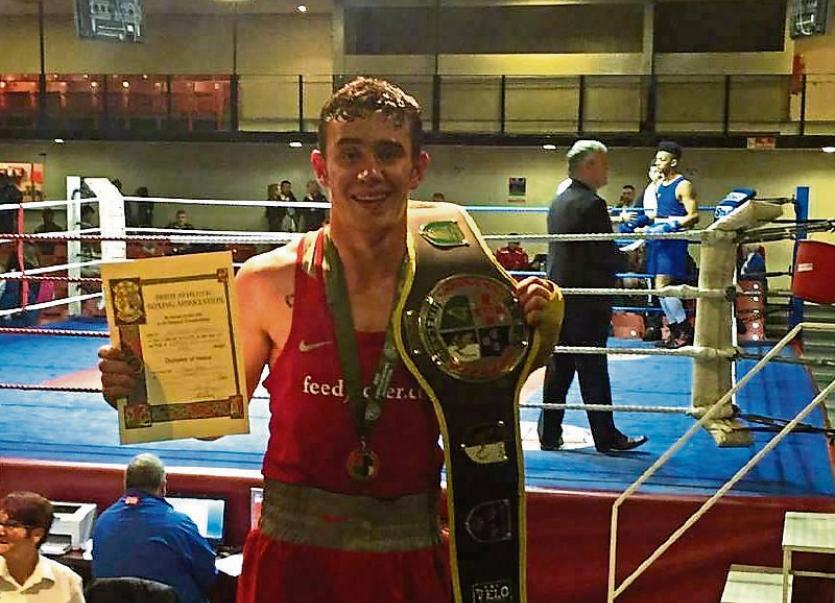 Ballingarry's Conor Ivors finished off 2016 winning the Irish senior title at the IABA Irish Championships in the National Stadium.

Ballingarry boxer Conor Ivors is reflecting on a successful 2016. The son of John Ivors and Martina Purcell was selected for the Irish boxing team at the beginning of the year and travelled to Chicago, Illinois, to take on junior Olympic and US national champion Youssif Salee Ala Badi. Conor won the bout via second round stoppage, showing his class against a top international opponent.

The first major competition of 2016 was the Celtic Box Cup in Dungarvan when boxers from all over the world competed against each other over the course of one weekend. Conor retained his 64kg title, leaving the Déise County with the Celtic Box Cup for the second consecutive year.

The 18 year old won his preliminary, quarter and semi finals at the IABA Irish Championships at the National Stadium in Dublin until a “potential tragedy struck”. The morning his final bout, Conor and one of his coaches hit a patch of ice on the way to the weigh in and their car hit and knocked a wall. Conor got severe whiplash and a foot injury from the crash just hours before his final fight. However, his determination and resilience to compete outweighed the earlier event and he went on to win the Irish senior title.

Past Scoil Ruáin in Killenaule student Conor credits his successes this year to his coaches at Thurles Boxing Club, his father, Alex Boyd, Danny Graham and Danny Coppinger for all of their advice and guidance.

Speaking to The Nationalist, the law and taxation student at Limerick Institute of Technology added: “I’ve had a lot of ups and downs this year, but it was great to finish the year on a positive note with the Irish senior title.”